The Milk of Paradise

She works until midnight

She works until midnight tonight ¢
The sentence makes me pause as I remember,
once upon a timeģ
Midnight was the hour when the party got going,
when liquified dancing took over my mind
and I couldnÆt even imagine her;
Because that was way before her time.

Later, midnight was the hour
of waking up groggy
for feeding and rocking
and burping and changing,
thinking the tiredness would never end;
But that was before her childhood.

Then, midnight became the hour
for one last check on the sleeping cherub -
the boisterous daytime hurricane
turned embodiment of peace;
But that was before adolescence.

Now midnight is the time
to wait in the car while she clocks out,
watch her approach in her confident grace,
gaining independence so achingly fast,
And to pray for her future midnights.

Dandelion in the spring,
half of your wishes spent;
carried off on tattered wing,
astride hopeÆs last lament

purchased wind that wanting bought,
secured upon dead air
were they wasted without thought,
dispensed without a care?

was each plucked with great concern
did you and Love conspire?
placed in hands that upwards yearn,
where action meets desire

gently to the earth I blow,
down where all the wishes go

Daring to go any distance is frowned upon
Not just so, but thrown dirt on top of
Buried before it takes its last breaths
Disenfranchised
Despondent
Full of unrequited nothingness which provides its shape
ItÆs life
ItÆs new breath
Yet soldiering on like nothing happened
Nothing said
Sheer will beckoning you to move forward
Take one more step
Then another
Willing your body to keep going
Knowing the challenge ahead of you
Knowing the despair
Knowing that what you do will be overlooked
And still
You keep going
One footstep after another
Resigning yourself to what you know must be done
If only to satiate your own sanity and well-being

When the weather was clear
with top-down, dad would drive
his British chariot to work
so happy, so alive
clearly big blueÆs
most stylish engineer

When behind the banjo steering wheel
by scent of old leather enthralled
my mind to enchanted lands would steel
the car was then with wings installed
I was to Caractacus Potts transformed
piloting "Chitty Chitty Bang Bang"
Hunting for the one every child abhorred
the nefarious, cruel candy man

Deep deep down at the bottom of the sea
lie unknown creatures, mountain ranges,
drowned cities and temples - a huge mystery Ś
a library-full of unwritten pages

Crop-circles, I visited one years ago,
peaceful, with incredible geometry ģ
hundreds over the years appearing æjust soÆ
yet most dismiss it all as quackery

If the moon were truly solid, its mass
would disturb earth in its current orbit Ś
scientific echo-tests suggest it has
to be hollow Ś howÆs that for a misfit?

True contact with Nature shapes a different mind,
one open to miracles in what you find.

Lessons in life part 13ģ.dance when you don't want to

The lock was frozen, the key unturned until
Ballroom blitz oiled my mechanism, tumbling
like a mad Yorkie skiting across front room furniture.
Using the Ewbank to reach, I spun the big light,
searching with the sirens of Blockbuster,
the guitar came in to electrify me
and for the first time the gate to music was opened.

The elegance of the Waltz is not lost on me
their grace and style are just too many miles
for my inhibitions to travel, the mothered hand
that pulls me into the North Sea, shin splinted
and knock kneed, shaking like a dogÆs back leg.
I could never do their walk to the dancefloor.

So, youÆll find me at the Barn dance
steeped in apples, rosy as my cheeks,
clapping and stomping midst bales of hay.
The churning circles of earth and moon
generates a basic gravity
that pulls everyone into the room,
flooding the floor with fiddles.

IÆve headbanged my way to the wrong side
of many days, but somehow it seems
to slip away like a lost balloon, let go
at the fairground of lunch time discos
smudged with hand stamped ink,
it all makes me stop and think.

And so, no more will  I say no or shake
my head from a dance hall seat
when all I have to do is stand and walk,
turn disappointment into a smile.
From now on IÆm just going to dance,
whenever IÆm asked or just get the chance.

[ Of Power And Rings ] Palantiri

Information in the wrong hands
becomes ripe for an age-old
type of modern warfare
---dependent upon eyes
sights absent truth or lies
are not so difficult to weaponize
when you merely project an image
and stand back, allowing viewers
to deceive themselves

And despite being one of many
strong willed, mighty men
Denethor was the least of these

My other accounts at DUP are Magnetron , Anarchitect , Psycotic Mastermind , & Mary Walker
Posted: 22nd April 2021 10:55am

For we should reflect the times
Ms. Nina Simone said it best
An artist should use their minds
Then say it with their chest

Poetry's my bulletproof vest
Protecting me from the strays
At times, life's hard to digest
Yet, this brings me sunny days 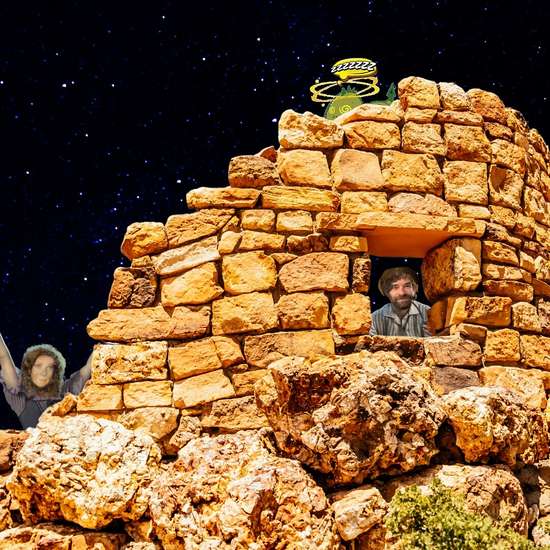 The Dark Knight and DUGlo slept in the abandoned ruins of an ancient  Numeralian watchtower, but Satin was wide awake.

He could not resist peering into the P'lan Tier Three they brought along from Castle Mudbug. When the Muddle Earthenet connection was established, Rosie Grace's face suddenly appearing in the globe startled him!

"Satin Gamjeez! Where in the world have you gotten off to?!" she demanded to know. "We were supposed to be bunkies on this trip!"

"I'm sorry, Rosie!" he replied. "But Mister DUGlo needed me!"

"What about MY needs, hrmmm?" she asked, giving him a stinkeye that rivaled the Eye of DUPon.

"Uhh ... um ... uhh ..," Satin stammered in a panic, just as a new connection logged on. "Someone else is joining the conversation - please hold!"

She was saying something about holding a rolling pin up against his noggin when Salamandar the White appeared. "Hahahaha! Fool! I may not know where you are, but I know with great certainty you aren't with the rest of the Fellowship at Minus Punctual! You have sealed your own doom!"

Satin Gamjeez felt his heart race. He was catching hell from all sides.

More scaly faced individuals in colored hoods logged on and joined the conversation, wanting to know if the Rainbow Coalition of Lizards was discussing when the next Muddle Earth Pride Parade was going to be scheduled.

There were other unfamilar faces as wel - one in particular by the name of TBombadil420 was very animated and irate, complaining that he was completely left out of the NaPoWriMo 2021 script.

And then a pair of what looked to be Frogs with paper bags over their heads appeared. One of them asked, "Pardon meeeses, but would you happenses to have Prince Borrowedverses in a can?" The other incognito Frog cackled hysterically.

Upon hearing the commotion as they marched by, a platoon of Porks patroling Moardor charged into the ancient ruins and up its stairwell.

MOAR!ON entered the conversation at some point, growling, "I seee yooouuuu!" before angrily smashing the P'Lan Tier on his end with Grubgrinder ... and then regretted doing so before ascertaining the whereabouts of his Precious.

Feeling lightheaded, Satin dropped the P'lan Tier before passing out on the cold, stone floor. 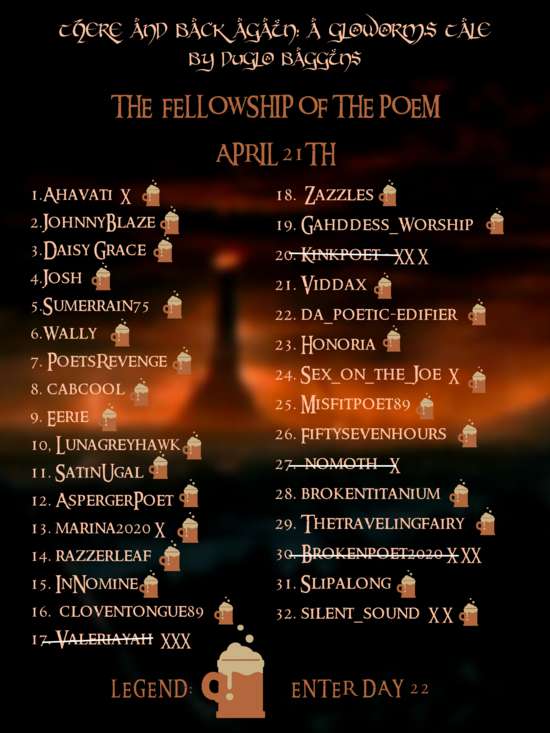 Greetings, Great Poets of the Fellowship! Have a mug of ale while RosieGrace and SatinGamgeez work things out before proceeding into Day 22!

Colorful displays colonize
landscapes, invade
sensory perception
across broad spectrums
of the expected, and yet. . .
Nature, in her benevolence
surprises nonetheless

Total Lunar EclipseŚ
though not of the heart;
but, Spirit. Her proximity
to earth only a miniscule
distance in a grander scale
of space. . .

. . .yet, close enough
her orbit, you breathe
the brush of magic instead

attached at the hip by drug addiction
we were conjoined
twins
I struggle with my own dysfunction
standing alone nobody
wins
sometimes weaknesses prevails
taking us where darkness
lurks
true love is real and it's the only
proven remedy that
works
learning the grass isnÆt greener
because it's on the other
side
but because time was taken to figure out
what makes it grow and what makes it
thrive...
hilarious when I think back now
how I felt back
then
I donÆt feel that way anymore
and I never will
again

Held Hostage By The Blind

The enticement of the moment
And the euphoria of the buy
Making payments on the world
We claim we own, until we die

Interrogated by these demons pawned off on me
Trying to be responsible, feeling like IÆm in captivity
Who am I trying to please, just trying to break free?
Hostage to a blind man, you donÆt know what you canÆt seeģ