Regale me, O surest night
that I am yours, alone and you
are mine with every known I seek,
that I might find if only you can lead.
Earnestly and with our fate in keep
among the stones we step along the weeds
and in your many shades of which to learn
always to your school will I return.
Teach me all I seek to know,
bestow on me every reason
for which by you to softly go.
Regale me, O surest night

It takes a village to feed this greedy soul

Somehow, it’s deemed
inappropriate,
unnatural
for me to care…
as if affection is
a limited commodity
only to be spent on
blood
or
vows.

Well, I refuse to play that zero-sum game
when there are so many friends I cherish.

It’s like I dodged that part of Eve’s curse:
“your desire shall be for your husband,”
For I desire
a host of companions,
intimacy that lights
all facets of my spirit,
and although
my lust remains at home,
I won’t abide limits
on my love.

Fond memory I have
traveling with dad
a long way down the 101
the seemingly magical vehicle to see
father’s mind set to own
the racing green, 1950 MG TD

Parked, rarely driven
smothered under clutter
In a garage in San Diego
my dad and his brother
unearthed the buried treasure
father with glee
hands over the dough
then back to San Jose we go
newest family member in tow

I want to write for you,
drenching the page
with words of love and hope,
to share the life lessons
I’ve learned the hard way,
hidden carefully, anxiously
within the rich fabric
of ordinary moments,
each of all and every one

I want to give to you
the beautifully constructed
analogies and metaphors
woven with expert fingers
into flowing, perfected
lines, measures, stanzas;
I want to inspire you

to move
to love
to risk
to appreciate

yet here I am, with none ~
they’re all tied up
on my tongue,
twisted into things
I never mean to tell you,
and in the dramatic fashion
I’m known for,
I’ve come here to exorcise them
only to find my pen
scratching at the paper
in frustration,
with nothing but my intentions
to show for it

I literally hate you

I’ve been thinking about this for somtetime now
the longer I stay, the angrier I become. Day after day he suffocates me with frustration. Dealing with a man with a wet brain infuriates me, he insults me, he pushes me.

In search of a room to rent
I don’t need much, just a place to put my clothes
and lay my head, Internet and a parking spot would be great.
I pay my bills on time, I am a writer so I need my solitude, no worries I’ll never bother you.

If i never see him again it’ll be too soon. I hate this man,
I really truly do. Not sure what else to say, except I’m through...

i can't think of a dang thing to write
so i will just type
and see what happens
on this tuesday night
day 20 of 30
for this little challenge
its the most poems I've ever had to smalenge
yes i used smalenge as a word
because what the hell else would rhyme
at this point right now
im just trying to get something in on time
sick as a dog and hard to think
may this little hodgepodge make it to the schmink!!

Repetition, either practice or annoyance
Delving deep within oneself to discover
Whether the former or the latter
Is what leads to your truth
Perfectly annoying or imperfect perfection
Without rhyme or reason
Evidenced or not within the mind
Leaving no physical trail
But what it entails
Has lasting affects on us all
Damaging, gouging holes into our consciousness
Healing, sealing and tying up loose ends
Two sides of the same coin, but different outcomes

Oscillating between priorities
Am I lost running in place?
In my aim to get ahead
Have I the patience for an endurance race?

As time plays keep away with the life I’m trying to make
And the more I spend the longer it seems to take
Finding moments of laughter between heartbreak
What is the reality of things and what is fake?

Destination, home again, by the grace of God, I’ve got this…

Uncertain is the world that triggers thoughts of death;
productive gardens give you greater depth … and yet?

Perception is everything
To many, a moon is:
A crescent, or simply “the moon”
Perhaps constructed of cheese.
Tell me, what do you see?
As the shape grows and shrinks..
It has lived through many phases
A luminous globe
A slice of lemon
Sometimes it’s all just a blur
A shadow..
I once thought, the sky was a backdrop
And at its center lived a glowing sliver
“Look daddy, a fingernail!” As I called it
Holding my infant index above my platinum fluff
And yet, to this day
Despite those many names
The moon always, and forever shall be

The fingernail in the sky.

until out of mind, thus
becoming out of sight

Merely shrouded in the mist
of the no longer longed-for
despite repeated insistence
they are missed, those friends
are still present at your side

If you keep them inside your heart
the entire time, you need
not look any further than this 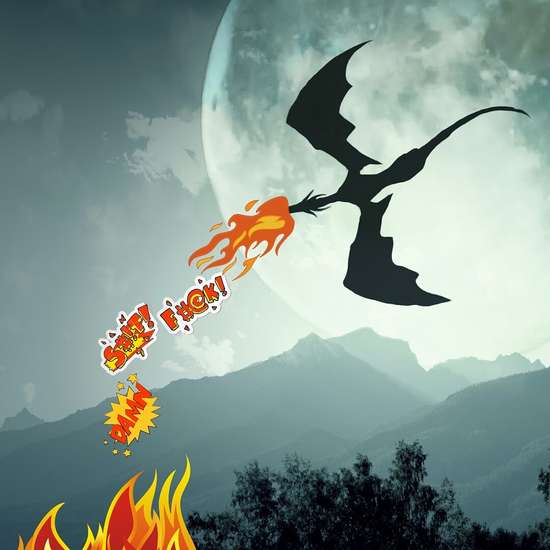 The Fellowship kept a brisk pace on the road to Minus Punctual, until a Fire Drake suddenly descended from a great height. It streamed a flaming torrent of obscenities upon the nearest forest, quickly reducing it to glowing embers.

By the time everyone was done farting around trying to place a name with the face, the Dragon had landed in the road before them!

The Dwarves readied their ink quills, searching for any missing scales in the behemoth's armor to deal a decisive deathblow, while Gimlyroo waited to give them the order to fire.

Riding atop the beast was a woman who said proudly with steadfast determination,

"I am D'Ahavanerys Stormborn of House Grammargaryen, the First of my name, Queen of Assonance, Consonance, and the First Alliterations, Protector of the Seven Punctuations, the Mother of Dragons, the Card Dealer of the Great Crystal Deck, the Unburnt Toast Buttered with Ghee, and the Breaker of Poetry Rules and Chains."

And a man behind her, holding onto the Dragon for dear life, said,

"I am Johnny Snow. April is coming."

Ganjosh the Gray shook his head in exasperation and said "No, no, no. You're in the wrong NaPoWriMo. This is The Lord of the Poems! You want Game of Poems one continent over!" And he grumbled to himself,

Later that day, they arrived at Minus Punctual, but the guards refused to open the citadel's massive gate. Steward Doneitbefore appeared upon the high wall, lording over them, while his council Wyrmholler addressed the Fellowship waiting below.

"WHAT A BUNCH OF MISERABLE VAGABONDS," he derided. "CAN YOU NOT SEE THAT THE HOUR IS NIGH TO CONCEDE MOAR!ON's VICTORY OVER MUDDLE EARTH?!"

"Ugh," winced Summdir. "His shouting in all CAPS is migraine inducing."

"We did not come here to treat with a halfwit wyrmhole the likes of you," said Jaragorn.

"AND WHO ARE YOU TO TALK DOWN TO ME FROM DOWN THERE WHEN I'M UP HERE TALKING DOWN TO YOU?" mocked the Steward's council.

A hush came over the Steward's council, while numerous city guards murmured excitedly, for Jaragorn was heir to the throne of the Western Men!

And coincidentally, a Tolkien Jrr.