oh, to be one of those
ladies gossiping in the kitchen
not allowed to the dining hall
with all the expensive gloves
and laced up silent throats
taut with ribboned ends of ambition
and secrets no one
[of importance] saw

they were the knowing ones
women who knew what brew
could clear a cold, what root
could ease a sleepless night
couldn’t read the words of God
but spelled out lives with leaves
left lifeless in the bottom of
a cup too likely made of bone

Cheerfully I say,
"good morning sweetie!"
A raised hand and stern look her reaction
Am I too needy
expecting similar salutation?
That’s it she hates my guts.
I’m an annoyance, you see?
A washed up, long worthless pawn
whom she wishes was just gone
Losers don’t merit such lively greetings.
What’s this? She’s now texting me,
“Sorry babe, I was in a Zoom meeting.”

Presenting the crowned King of assumption.
Transformer of facts into fables.
Dread Sovereign of split-second presumption.
Exceptional turner of tables

Sit a spell, stretch your imaginations
While I regale you with fantastical tales
of supposed slights
and ostensible denigration's.

Although I walk here often,
it’s clear I still don’t belong.
I long for softer feet,
for a scent that isn’t so human,
so that I can get to know the creatures
in their true, relaxed state.

But no – crows caw their warnings
as a pheasant streaks across my path,
hurrying into hiding.
Deer stop their grazing,
watching me, wary and big-eared as they discern
whether to feign nonchalance and trot away,
or to bound with their tail-flags waving white.
A robin anxiously draws my attention
away from a nest I can’t even see.

If only they all realized
how dumb my human senses are,
they wouldn’t be so alarmed.
If the ducks were aware
of how their panicked quack-flapping startled me -
likely more than I terrified them -
they would know I’m not much of a threat.

But all their instincts must tell them
that my kind is bad news…
and I can’t say I blame them.
So I have to be content with
a last-second glimpse of submerging muskrat
as I go stomping blindly by,
a clumsy human intruding on a world
where I clearly can’t be trusted.

Steer by the Stars

There you are, exactly where I used to be
At the same age and time
Looking at the waves and rage of the sea
Hoping for a ray of sunshine

There you are, standing at the top of the cliff
Staring into the cold abyss
Gazing endlessly like you’re wondering if
All of this will go amiss

There you are, with profound compassion
Delicate fractured soul
Hiding behind a smile with closed caption
Trying to find your role

The answers will come to you in time if you’re patient
You’ll learn to steer by the stars on those darker nights
But remember never settle for less or become complacent
And most importantly, never lose the will to fight

I can see your smile by the light of the new moon
Here you are, you’re almost out of your cocoon

Fighting an uphill battle
Going against the current
This is what’s said to be
Doesn’t get easier
You grow stronger
But doesn’t that mean it’s easier?
Confusing messages
Riled up thoughts
Grappling for the attention
That is my consciousness
Breezing near my facade
Threatening its upheaval
It’s draining... so very draining
How terrible... this mess that surrounds
Envelops and divides
Yet comes together at the end

It takes love, patience and understanding
Because relationships can be so demanding
Demanding our time, energy and attention
Sometimes it feels like an impossible mission

Every moment the culmination
of a million-and-one unknown things,
a self-organising gestation
continuously on the move. It brings

Send me an angel! … I want a word with you
what’s the meaning of this, this intrusion,
this domestication of wild fruit
and free spirits, this sick pollution?

Let there be sleep 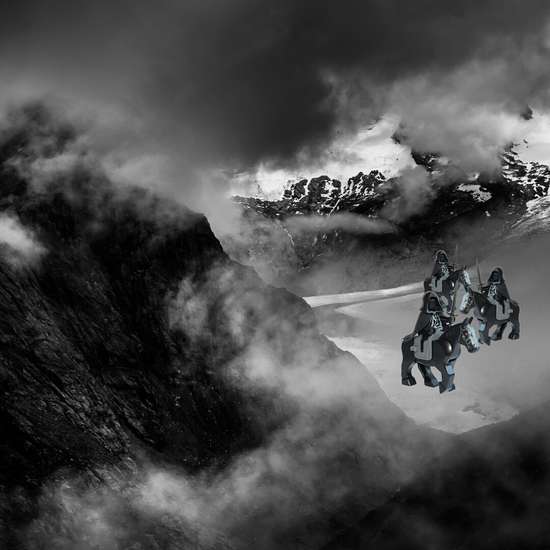 Manmoth messengers harriedly carried word to Moardor that the Eye of DUPon had abandoned her post. Displeased, MOAR!ON obliterated his coffee table with his mighty mace dubbed Grubgrinder. Soon it would be time to wage his final war against all in Muddle Earth who would oppose him!

"Alert all legions to be on the lookout for my Precious!" he commanded.

The Manmoths scattered to notify his minion multitudes that there was mayhem to be made on the horizon.

At that very moment, DUGlo and his companions scaled a little known ancient stairway leading across the mountain chain of Grub Dulgur. Long overgrown with stinkweeds, it was carved into the rock by the Numeralians long ago. On the other side was Moardor, and Mount Dumb further in the East.

"Boy, I sure am getting tired of climbing mountains," said Satin Gamjeez. "One thing is for certain, Mister DUGlo: our abdomens will be chiseled! We'll be in the best shaped of our lives. If we live through this, that is."

The Glowyrm had his doubts when they reached the plateau and laid eyes on Moardor below. Porks marched everywhere about the landscape that was crawling with Beetle Borgs. It would take a miracle for them to reach Mount Dumb without being seen!

To the North, insufferable shrieking erupted again. The Poemwraiths issued forth from Humbug riding through the fouled air on their Smelly Beasts! NaPoWriMo was to be met with all resistance, and with The One Poem ™ nearly within their grasp, the Fellowshippers had not a prayer of even making it to the month of April!

They split up, canvassing the terrain, knowing that the Dark Knight and his grubby little companions would be bent upon destroying the Master's Precious.

The rest of the Fellowship trudged along towards Minus Punctual, the last great kingdom of Muddle Earthian Men surviving from the Ancient Days. It was built by the Numeralians before the stronghold of Moardor was established in direct opposition to its presence.

Having no rightful heir to occupy its throne, the Men of the West were governed by the Steward, Lord Doneitbefore. He was a very unimaginative man with two likewise unimaginative sons, Borrowedverse and Fairlyverse. Convincing them to lead their army into a battle with the minions of MOAR!ON would be no easy task, but such was their only hope in creating enough of a distraction that no one noticed DUGlo travelling through Moardor.

The Dwarves entertained themselves along the way. Honoria abd Sex_on_the_Joe played a game of Slugbug. During a drinking contest, Ghaddess_Worship and cloventongue89 repeatedly fell off their Donkeys.

Zazzles was teasing the Eye of DUPon, trying to make her blink by feigning to poke her with a stick.

"I wouldn't do that," said Lunalass. She pointed to a batch of skeletons in cocoons suspended from the nearby trees. "That's what Sheila and her crew did to the Dwarves during NaPoWriMo last year when they got cocky."

The stick ended up on the road as all of the Dwarves nervously hurried to the front of the caravan.

No one noticed that Smuggle and Duggle had managed to squirm free enough of their duct tape bonds. They fell off of John Ronald and hopped away into the woods. 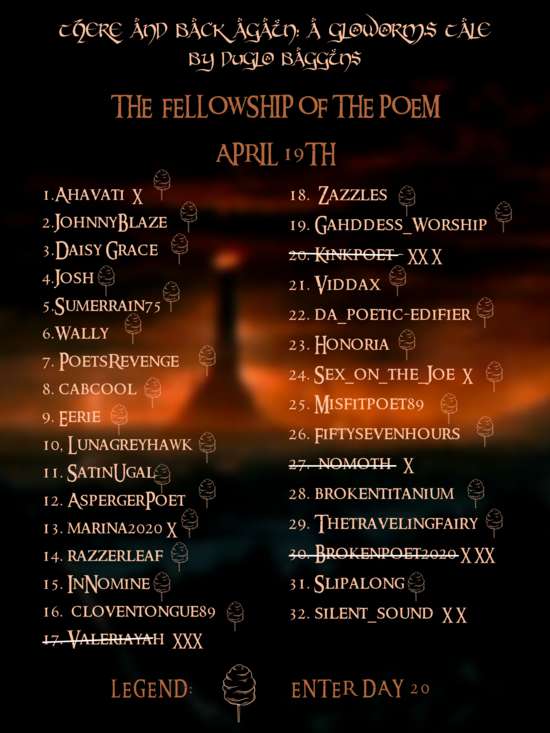 Greetings, Great Poets of the Fellowship! We hope you had  a nice break at the carnival last night! Woot! Woot! You're 2/3rd the way there! Congratulations!

The Curious Case of Euphoric Molecules