the crescendo of
silence,
disjointed, dismembered
deafening
in the
(floating)
black hole space
where
ears play dead on
repeat
repeat
repeat
high-pitched
hushhhhhhhhh
rides smoothly
upon (above, atop)
the broad back
of trembling contralto;
white noise nonsense
flows glissando
in B-flat major,
with relentless
lack of
purpose;
there is only
nothing,
and also everything;
all at once,
an unexpected
cadenza

Heal me, O balm of night;
such blistering words as day has
brought, so you wholly repair.
I only need wake to meet you there
beyond the sunsets orange tawny death
you, in frigid blueness come to life.
You, in coolness lift all strife
and in the beyond where you abide,
a healing rest to all is come alive
to wake me from ills which spread
far, rampant and wide.
Heal me, O balm of night.

A nap in early afternoon
For an hour, maybe two


I miss the days
when kids played outside
playing  Relievio, Tag or Hide n Seek
till the street lights came on.
Back then,
all kids knew and understood
nationwide,
when the light came on
it was time to go home.

“And-god-help-you !”
if a neighborhood parent caught
you outside past the light-curfew
they had no problem grabbing
you by your ear while dragging you
to your parents house.

When kids where taught to respect
their elders, and actually did
and would rather face a firing squad,
than be put on punishment
on a Friday night

Moms woulds invite a neighborhood
friend to stay for dinner,
because she knew
that kid was having a tough
time at home, nobody judged
people just cared back then.

Aristocrats still getting fat while serfs wipe out in waves
Breaking backs for what they lack 'cause the system's depraved
Digging their graves, trying to get paid, as coins trickle down
Treading water in order for their daughters not to drown

It's get down or lay down in the concrete jungle
The only immunity or impunity lies inside a bubble
We all juggle as we try to stay stable on financial grounds
Yet, many are unable to rise any higher than the level of the ground

Choosing to go underground like the Kennedy's moonshine
Caught up in taut, dark web nets as they try to rise and shine
Desiring to wine and dine instead of crying over spilled milk
Even if the consequence is a fence or a coffin lined with silk

Take the pain away

Grandmother was always kind to me
with many...well, most others
she could be quite ornery
but what a joy to hear and see,
when she had the druthers,
to tickle those ivories

i picked you up at three
we ate shwarmas by the sea
followed by NY cherry and grasshopper pie
it wouldn't be long before we both crashed from the sugar high
we napped in the car before climbing Turtle Hill
watching the sun sink and laughing - so chill
not long after, our fun day would come to an end
i drove back to the beast bay filled with love for my dear friend

Awkward tensions of stubborn hearts
The silence leaves room for what’s unsaid
I try to reach across the void to counterparts
But apathy makes believe, we’re better off dead

And all I can do is wait out the cold
For the sunshine to dawn once more
All bets are off and I fold
What are we still fighting for?

At the T-junction there is a main road
it goes to the left and goes to the right
the sound of traffic lures in a strange code …
fixed choices — good and evil, day and night

The narrow animal path, straight ahead
is hard to see, covered in Nature’s green
it leads through wilderness and triggers dread
of the unknown, real life, risk, things unseen

Busy traffic must first be safely crossed:
do so at night when people are asleep:
what you cannot keep is really no loss
as the soft path feels home beneath your feet

If I knock and there’s no answer — so what?
I walk on, joining the vague trail of dots.

It’s easy to understand the rough touch
of an ornate brick, the concrete shoes
that keep me fixed mixing mortar,
listening to my blood pump, drowning out
bird song and expectations.

Any good hoarder worth his pile of
newspaper will tell you that once
the walls are complete we start on the tunnels,
everything we buy from the ground up,
must be saved for future reference.

Above the basic workings of a life not lived
we are the landfill sites for Amazon trucks,
the crust that seagulls flock for, laughing
from their rooftops, the peck and cry of
missed understanding.

The 240 volts of a trialing lead
only feeds a kettle and a single hot plate
long enough for everything to deteriorate.
The soft words pull our pale thin bodies
from the earthquake rubble, the rescue
teams take care of every brick,
but my mind is still running a hand
over a new foundation. 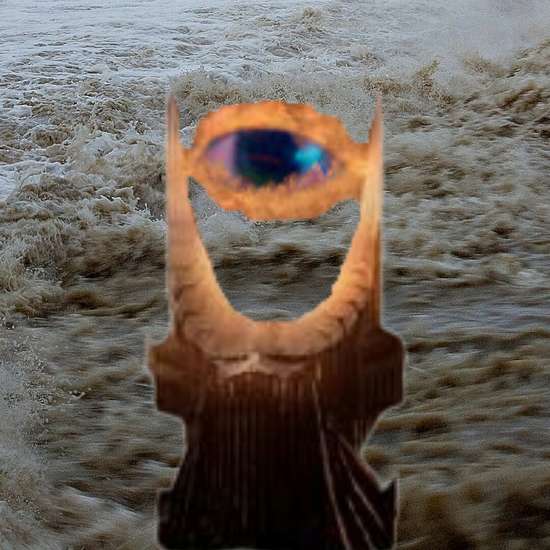 It was within a matter of minutes that the flood carried them all straight towards the Eye of DUPon. When all was done and said, our Fellowship ended up stuck in the massive spiderweb suspended between the Two Point O Towers.

They were out of the frying pan and into the fire!

Out of options, the Dark Knight spread his arms, and used his cape as a parasail. He leapt off a cliff of the Musty Mountain, leaving the Nasty Ghoulies behind shrieking in frustration. Although, with Satin and DUGlo clinging to him, it wasn't so much hang gliding as it was a controlled crash landing.

And an ugly landing at that. They came to an abrupt splash in the Dreaded Marshes not far away, but far enough that they had a good head start. When the Nasty Ghoulies finally made it back down the mountainside to their miniature black steeds, our rogue Fellowshippers were miles ahead on the way to Moardor.

The Eye of DUPon had been preoccupied with the grand surge of water rushing straight for her. She witnessed nothing else! The raging waters had also washed away the Pork guards, giving the Fellowship some time to think up an escape.

Unfortunately, Spiders contracted to keep the huge web maintained and clean of wind blown trash approached from every direction. It was every bugger's worst nightmare come true!

InNomine started thrashing about in a panic. AspergerPoet56 dictated his last will and testament to anyone else who might survive this.

Cool Dude Merry wished to serenade the Spiders in the hopes of currying their favor, but his mouth was stuck shut by the web. Lunalos could not reach her bow and arrow to at least frighten them off. Eerowyn was just thankful that the Donkeys, with the exception of John Ronald, were parked in the shade down the road out of harm's way.

Smuggle wept and prayed to the gods that, should they be set free, he would be a lot nicer to his brother, Duggle. And not plot to kill Wyrmses anymore. And refrain from eating Porkses. And . . .

The largest of the Spiders was the foreman of the crew with the nametag of Sheila Lobelia. Chewing a piece of nicotine gum and adjusting her hardhat, she said, "My, my, said the spider to the fly! What do we have here?"

Then she scuttled up to Misfitpoet89 who was quaking in her boots and said, "Don't worry, little bugger. Do not cry, for you have nothing to fear."

"Really?" asked the Dwarf with a premature sigh of relief.

"Are ya kiddin me?" replied Shiela, followed by a wicked LOL of a laugh. "You're an all-we-can-eat breakfast buffet and my sisters are famished!"

My other accounts at DUP are Magnetron , Anarchitect , Psycotic Mastermind , & Mary Walker
Posted: 18th April 2021 11:55am

Dirty drinker
Street scum
Tangled hair
Stumbling out alone
Until she finds another home
Uses them like garbage cans
After serviced, onto the next
I detest this face of stone
So coldly gray and wrinkled
Shriveled like she’s out of season
History has marked her
Like a page crinkled
Those sapphire eyes, glazed
She doesn’t want me
No..
She wants love
But
I can’t give what I never received
My dainty hands reject the sins
That drinking hands seek hungrily
I’m sorry, dirty drinker
I’ll love you when you’re ready
To clean up, kick the door
And be the woman you should be