The suggestion has been made
that I tend to ignore details I find inconvenient
in my naďve pursuit of a better world…
“But what about the future?”
“That’s not how things work.”
“No one thinks that way.”
“We just can’t afford it.”

But I do see details – if they’re important -
I just don’t fabricate imaginary barriers;
so much of what people value
and cling to keep in their half-empty glass
is ultimately meaningless anyway.
The details I choose to see show me
that the better world is already here
for those with the eyes to see it:
in steadfast friends talking eye-to-eye,
in the old country church welcoming refugees,
in the youth, full of compassion and fire for justice,
in the weathered old man feeding hungry birds.

So my counter-suggestion is
that the glass is not half full –
it’s full to the brim and overflowing
with abundant love and grace for all,
if only we have the courage to let it in
and then share with the neighbour beside us.

I am chipped,
Worn around the edges
Energy stripped

Tarnished to my liking

My pen is dry
Poor and brittle
Soft, yet smooth

My eyes fight to stay open

My subconscious is numb
Operating on fumes
Feeding its misery

I can’t shake this slump


the only thoughts I’m having are second
yup I am, my brain is flat as a pancake
I got no syrup in the house, I am the tin man

I don’t think I care about the trophy
even though it is super cute
i cant go on, i don’t  have it in me

this comp, It’s making my brain bleed
but on the other hand, inspired a short story
but im cooked, stick a fork in me
i’m way past well done

Do you think I am unaware
that my wild lawn needs mowing?
or that my straight edges
are partially concealed
by encroaching, creeping
ungoverned grass?
you’re disapproving,
armor piercing  glare
screams, get off your ass
and start working!

Why subject nature’s
breathtaking medley to order
or the spread of new growth
to borders.

Away with you! Get away from my life
Don’t you think you’ve caused me enough fear and strife
You played my emotions and now you want more
If I let myself loose I’ll just settle the score
You haven’t changed your colors though I can see
Trying to hide your words with sugar, sweet as can be
This time I’m smarter, this time I’m wiser
You can’t gaslight me any more with your lies or
Any trick that would have worked on me in the past
Just remember that the last time was the last

up above vast stretches of dusty rose quarts
roads of powdered amethyst for as far the eye could see
rivers of moving turquoise
take the zipper and peel it back
exposing a peek into the realm of nebula
a bath in star dust before returning back to the desert
the rocks glowing contrasted by the darkest nights sky
a woman dark hair, red dress, crown of roses
lays a tarot spread
she's on our side
a whale breaches at the dock around the bend
i let all my breath out and sink to middle earth
the alarm clock goes off
wait.. where am i

This girl, this beam of bright
As if born of the sun
Could tread where she pleased
Into sand, over moors and grasslands
A perfect landscape
That kept growing faster
With every soft step
Skin of a rose, strands overgrown like ivy
The dye of orchid
Talon nails to mark her territory
No fences, she had zero bounds
If the elements infringed the law
Of blooms she grew, of trees she climbed
Like wind seizes a leaf, there was no chance
Of being tamed
So as the clouds rolled in
As the rain began
She grinned, she laughed
“Let lightning break.”
Her kingdom of light was transformed
Into a hurricane
This was her thunderscape

I haven’t got a Cluedo how I got here

Heavy rain washed over the wiper blades
the car juddered to a halt, steam rising
from the radiator like a Roman spa.
As I looked around for any sign of help, lightening
flashed across the silhouette of large
foreboding house set back from the road.

I started the 60-yard dash, coat over my head.
The solid oak of the front door gave a dense thud
as I banged three times. It opened before the fourth
“come in Reverend” said a well-placed butler
“We’ve been expecting you”, I was about to say
you have me mixed up with someone else,
when I saw my reflection in a large ornate mirror,
I run my finger inside the white collar
that had appeared around my neck.

I was ushered into the Library
sat down on an old chesterfield.
“May I take your coat” asked the butler
exchanging if for a large silver dagger.
“My cars broke down” I said in a distant voice
looking at my reflection in the blade.
“Can I introduce you to Mrs. Peacock”
he said as he left the room.

She strutted in, all her finery and
feathers interlaced with her dress,
“hello reverend how lovely to meet you again”,
I saw the candlestick behind her back,
her eyes burning with a dark madness.
In a flash she lunged towards me,
candlestick high above her head.
I instinctively stood up and raised my arms
causing her to run onto the dagger.
Its sharp blade sliding into her torso,
as the madness drained from her eyes
she tried to tell me something.

I collapsed at the sight of blood
and came-round in thin white room
that smelled like a dusty old envelope
with just the dagger and a sign that said Library.
As I scanned the walls, trying to find a door
I began to panic.
I could hear voices outside
giant footsteps each one called out by its number
I could hear names, rooms and weapons
being listed in different orders.

Then someone mentioned the dagger,
its blade glistened as it spun round
standing on its tip in perfect balance.
Next the Library sign jumped to attention
as if waiting for further instruction.
Then I heard the words “Reverend Green”
the paper-thin walls of the room
fell apart in a blinding white light
and I was stood outside again
back with my car in the pouring rain
blood dripping from my shaking hands.

down the road in earth’s physic dimension
the question of illness loomed on the scene,
that pin-prick which grabs all your attention
in an illusion — but what does it mean?

Then starts the bargaining with God and let’s
not pretend illusions can’t be scary,
we make rash promises and tangled bets
in fear of life … death — the ordinary

Is it about those left behind, alone,
their onward soul-journeys when you are gone?

Pacing myself in the rhythm
Every line I orchestrate
To say everything and nothing
You set the course, I run the gait

Measuring myself
After my approval rate
Thirsting for significance
Hook, line, and wait… 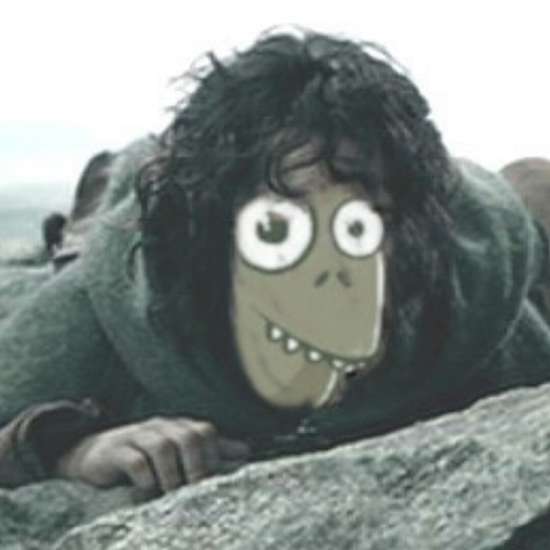 The Nasty Ghoulies inchwormed there way up side of the Musty Mountain, flaming swords in hand. DUGlo, Satin, and the Dark Knight feverishly climbed higher.

In desperation, DUGlo reached for The One Poem ™ hanging from the neck chain tucked underneath his shirt. He seriously considered reading it aloud. Was not the power to tell the Poemwraiths to Back off! at his very fingertips? Would he not become their Master ..?

"Don't you even think about it!" said Satin Gamjeez. "The Poem is pure EVIL!"

"He's right," said the Dark Knight. "The satisfaction of having that power will only be fleeting. Then it will turn your brain into a poe-tayter-tot! Only MOAR!ON is capable of weilding the wretched thing."

DUGlo sighed, reaching for a cliff rock instead. They retreated further up the mountainside, but soon would be able to climb no higher without being seen by the Eye of DUPon!

Larry the Werebadger was about to reach into the waterlogged cell for the first handful of Dwarves to become appetizers when a lone, miniature Donkey strolled in from the woods. It was garnished with a pair of tasty looking Frogs duct taped to its saddle!

"Ohh!" exclaimed bucktoothed Barry. "I call dibbles on the Froggies!"

But when he reached for the panic stricken duo, John Ronald bolted between his hairy legs. Harry shoved his cousin aside and chased the Donkey around the cauldron to no avail until he was out of breath. Smuggle and Duggle were queasy with motion sickness.

No matter how hard the Werebeasts tried, they could not get their clawed paws on the Frogs. John Ronald was too quick and clever for them. And then a curious thing happened as the sun came up: they turned back into the little Animal-Folks they were normally were during daylight hours! Off into the woods scampered Badger, Beaver, and Groundhog.

"Whatever in the world did you whisper to the Donkey?" asked Ahavarwen.

"I only told him to find the Dwarves," replied Jaragorn. "I never expected him to act like such an ass."

Everyone cheered! at their sudden change of fortune, until the reality that they were still imprisoned settled in. The Frog brothers were still duct taped, leaving the Fellowshippers to a fate of hypothermia.

Twenty minutes of brainstorming up an escape to no avail passed when an Ent named Treenuts walked by. He stopped dead in his tracks, horrified at what he saw.

"Many of these trees were my friends!" he cried out in anguish and began tearing apart the dam with his bare branchy hands. Or were they handsy branches ..? "A Werebeaver should know better!"

"Everyone, hold onto your butts!" shouted PRadriel as the swelled up river was suddenly unleashed upon the hillside.

[ Dreamscapes And Nightmares ] One Person's Trash . . .

Solutions to simple and complex
situations presenting themselves
in your dreams often overlooked
for two reasons:

nightly, you don't invest
a few minutes insisting
you will recall what is dreamt

daily, you do deposit
another garbage truck load
of fresh thoughts to contend with
into the vault