Check the clock
Read the problem
Stare at the problem
Read it again
Look in notebook
Write down an equation
Erase - wrong equation
Check time
Move on
Number 2
Read
Stare
Read
Write answer
Look back at first problem
Flip through papers
Find nothing
Move on
Check time
Read
Answer
Read
Answer
Read
Stare
Check time
Read again
And again
Sift through notes
Look at equations
Find one that matches
Solve
Check time
Check over the numbers
Did I get the same number twice?
No
Shit
Where did I go wrong
Whatever, move on

ōListen close, daughter.ö
Wind carried woodsmoke, the green smell
of firstly cut grass, the dancing
of new leaves through the trees
into the clearing.
Smells you only find in this
particular moment of the year:

The bald spread beneath our
feet in every direction. Old grass,
not quite awake, rustled around
ankles and rain air scurried to the roots of
maples in the distance. An open field
on top of our mountain.

I found myself burying
hands in pockets, pulling up my hood.

My eyes scanned the tree line,
marking the places blackberries and wild sweet william
would make an appearance, scouted the best
shade spots for when it got too hot.

Heard the creek whispering the promise
of clean drinks and cool feet as it snaked
its half-moon path around us.

ōTrees donÆt grow here,ö he whispered, pulling the collar
of his jacket up to his chin. His twinkling
eyes betrayed his somber face.

the human touch, is fading fast
nobody knows, how long itÆll last
moms & dads, living in fear
hopes for tomorrow
another year?

some will die, most will live
all will cry, their prayers theyÆll give
natures way, of heard control
earths prophecy
yet to unfold ...

Anxiety is rising and filling up my chest
One decision on each side but which one is the best
I know what IÆve done in the past and thatÆs to be a doormat
But the other is slightly aggressive and I have trouble going for that
No matter what I know things simply cannot continue as they are
For if I do IÆll grow resentful and only deepen these scars
It seems I care too much when others donÆt care at all
But if I move farther forward I am still afraid to fall
I know I can do this but self doubt creeps through my mind
And itÆs in these dark corners and crevices that every excuse I find
But now to take a leap of faith and deal with these matters at hand
I will not be one to sit this out, no, I will be the first to stand

Salt fat acid heat
This four way combo
Makes the perfect eats
Your flavors are so very fine
Especially paired with some nice red wine
Heirloom tomatoes, olive oil, salt and pepper
You really canÆt do any better
Top it all off with fresh shaved Parmesan cheese
A bit of chopped basil
And oh my Gods please

The conflict runs deep Ś itÆs Jesus or Marx,
one believes change yourself first and the rest
follows. The other, gunned direct action sparks
societal change fast, is claimed the best

Will the human experiment fail again?
Will ecology have the final æAmenÆ?

No More Tears to Shed

What can one do, with so much hatred
Built up fury, caged inside?
All my tears IÆve used
Abused
I own no more to shed

If I stole some back, there would be sin
A stain or two, some smears
IÆm afraid IÆd waste those tears again

So tell me, what can one do
To set these vices free?
IÆve carried them so long
They are my property

IÆve tried selling them, through various methods
I call them ōtricks of the streetö
You learn them from other prisoners
Who squandered tears so carelessly
Now that theyÆre in debt, theyÆll do
Almost anything
To make ends meet

ItÆs dangerous when one finally breaks
And thereÆs no more tears to shed
ōJust how do they do it?ö You wonder

If the things that tears can clear, travel to their head
No crying rescues
You should be scared dead
Of the people you meet
With no more tears to shed

Reeling, abandoned by your mother
feeling not a single person
in the entire world
cares

i have doubt it was ever god
who called us b/witches
who silenced, by all the elements
the voices s/he bestowed
for lullabies, for screaming
both grief and pleasure
who declared our bodies
for the purpose of those above us
a swathe of sins
deemed our sensibilities laughable
and dangerous at once

what god would resent credit
gone to common sense or magic
for our resourcefulness
in our recognition of their intricate creation
caring for another through
combinations of mineral, leaf and root
energy imbibed by intent
[we may be vicious sometimes
not always enough for burning]

we will not
leave these walls
unattended
they have become the shelter of learning
temple, fort, colosseum
we chose to green in that barren ground
build with our sins and their sister virtues
rounding out our humanity
and our natural deity which delights
in daughters 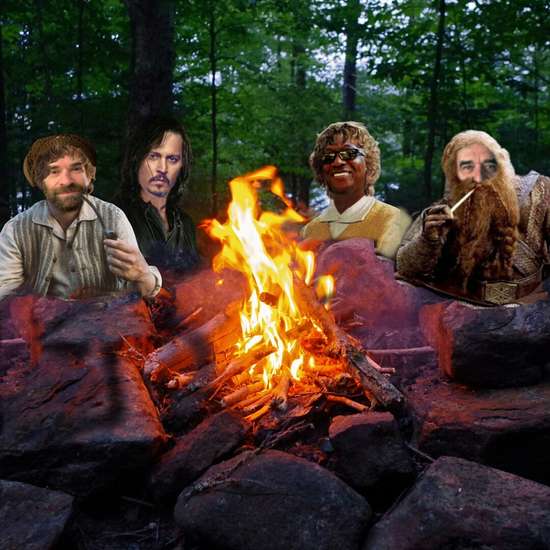 "We can go no further," said the Dark Knight, "or we risk being seen by the Eye of DUPon." So, in the shadows of the Musty Moutains, they made camp within Stanza Valley.

"If only we could become invisible!" said Satin Gamjeez as he built a fire before cooking dinner. "Then we could stroll right into Moardor and up to Mount Dumb without a care in the world. Now wouldn't that be some trick, Mister DUGlo?"

But the Glowyrm was far away in thought. His plan of destroying The One Poem Ö by himself was a bust. Was it really such a bad thing though? During difficult challenges, wasn't it better to be in good company and have a support system? Was it a mistake to have left the others behind?

DUGlo began to feel he had let them down.

On the other hand, he was glowing so darn bright that it was a risk for anyone to travel with him at night! The likelihood of him being found was too great. As it was, he was putting the lives of Satin and the Dark Knight in terrible peril.

"Did you hear that Mister DUGlo?" asked Satin as he peeled a large poe-tay-toe. "Mister Dark Knight says once upon a time, the Spiderweb Mistress was not just one eye, but she actually had eight eyes!"

"I prefer the term Weregroundhog," said the giant, furry creature.

"It's talking!" said Gimlyroo. "Why, this is a thing unheard of!"

The oversized groundhog stood up like a man, put a paw to its hip, and replied matter of factly, "What? Like, did you think I would just be like some animal runnin around the forest grunting, chuckin wood, and diggin holes in the ground? By the way, I'm not "its". Like, I happen to have a real name. Its Harry. No, not Its Harry. Just, Harry"

Smuggle spat out at his brother in a harsh whisper, "Ballses! That's the last time I listen to you silly, stooopid Tadpole brain! You said there was a dark terror living near the Towerses. You said it was a bloodthirsty Badger! Does that look like a Badger to you?!"

"Kind of," replied Duggle, shrugging his duct taped shoulders. "Maybe a bit like a Beaver?"

His brother shook his head in utter defeat. Given every scheme of theirs had backfired so far, they might as well kiss the Precious Poem goodbye.

The ginormous woodland being talked to the Fellowship briefly around a campfire while they waited for the Dwarves to catch up.

Eerowyn noted the creature's peculiar language skills and asked, "Why is he saying the word like so often?"

"Harry is a Likenthrope," replied Ahavarwen. "His ancestors were cursed by MOAR!ON to have great difficulty making direct metaphors. The curse causes them to create comparisons instead."

"He's also a Lycanthrope," interjected Jaragorn. "Originally, Lycanthropes were Men who were afflicted with a disease that caused them to shapeshift into Wolves. The disease was then passed onto any person or creature who survived being bitten. Harry is one of the little Groundhog-folks and someone in his family must have been bitten at some point."

"And being both a Likenthrope and a Lycanthrope makes him Homophonous as well," added PRadriel.

"Alright," said Harry in a huff. "Let's not make this personal." 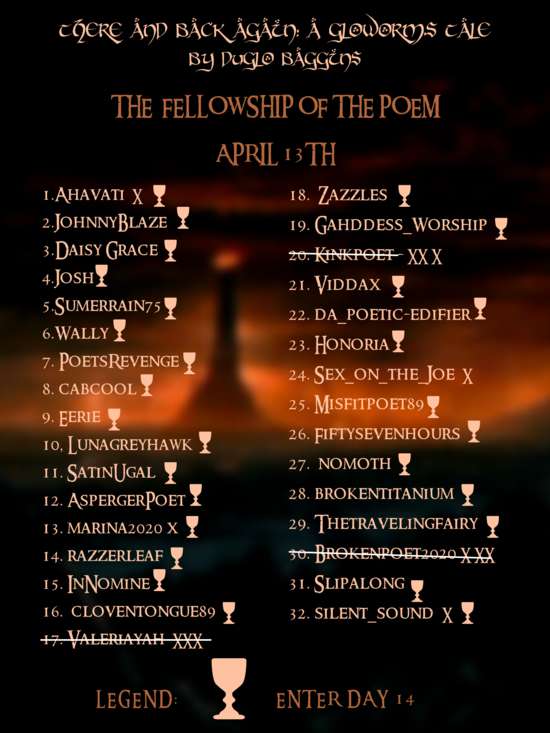 Greetings, Great Poets! You are only one day away from the halfway mark! Unfortunately, we've discovered another poet has fallen and yet another injured.

We know you're tired! If the Wood Elves have provided you a shot of their * special * energy drink to get you to that halfway mark tomorrow, you may proceed energized into Day 14!

If the forward path seems too challenging, look behind you and see how far you've come! You got this; and we've got you! Stay with us now!

Waning GibbousŚ
introversion:Āninety-nine
to fifty percent
( half of a half )
in receding blink of days

Gratitude, ritual
all that was graced
from intention's harvest
stored safely in the cellar
of contentment
now relaxed

We settle with her
quietly dimming the light
. . .

Between A Stone and A Hard Heart

Am I caught between a stone and a hard heart?
As we develope the pictures of our lives
Seeking for a quick fix as we go back and restart
To gain back the ground forfeit for knives

What betrayal of trust but for the wounds of honesty?
When faithfully afflicted of a friend
Can we love the devils out of ourselves?
Will time soothe what otherwise these words won't mend?

Off color remarks, something in me sparks
Lost for reactions and backtracking replies
I'm trying to get to the bottom of the truth
But I'm still working through the sickness of these lies

Rid my heart the rage within
Cure my mind the enticement if its sin
Going in circles, sabotage and start over again
We are more than our impulses and the appetite of skin

Rebuild the breakdown
And refine where it is we want to be
I don't want to lose us for the tension
Don't take your frustration out on me...

We exist despite discrmination
Genetically judged

Once culled by nazis
Inferior unproductive
No memorial or shrine