This poem is totally going nowhere -
the words are all flailing in midair,
stubbornly refusing to connect
to anything meaningful anywhere.

I’m just spewing verbage out of spite:
Castle! Curtain! Kitten! Kite!
Forced poetry is killing me,
keeping me up too late each night.

All my ideas have fallen flat;
smushed on the floor like a headless hat.
This pile of word-vomit will have to do;
out of time, need to sleep - and that's that.

Thus it is with step-mother
who now assumes
a compassionate glow
whom to father, aged and ailing,
shows loving devotion unfailing
and I, the antecessors son
retired the step and call her mom

This transformation,
my dear deceased mother knew,
was bound to transpire eventually
for I hadn’t a clue, on the day that I wed
why I did copious tears shed
while hugging my uneasy step-mom
the answer to this mystery?
I was by emotion overcome
because my mother from heaven,
accepting the other as proxy,
was she who truly embraced me

I GOT A STORY TO TELL

Getting my ducks in a row

Notes to self:
make sure you put a note
in your iPhone notes, saying
where you hid your wallet.

And, don’t forget to check the listings
for available 1 bedroom apartments
oh and, take your spare set of car keys
an lock em in the trunk
I
need
to
move
on
Write a hand written letter saying goodbye,
sell to the the buyer on eBay who said
they’d pay full price
for the diamond ring

In this ever changing world that we find ourselves in
Where the newest thing lands before the last can begin
News travels fast and can leave you in the dust
If you don’t keep on the latest gossip you’ll surely rust
Tiring oneself out to stay ahead of the curve
But who does this intention truly serve?
Not you or I no but the ones tracking ratings
Giving the populace blood to satisfy and sating
The world with a good horror story and the drama which we crave
In which we bind our own ropes and become our own slaves
To mass media and what’s the next sensational story on the block
How can our own little worlds be so rocked

Not adept at sitting still,
she’s always loved to run;
racing to the midnight sky
a step before the sun

lacing up her sneakers tight,
she stepped along the stars;
hid away the afternoons
in flaming House of Mars

the sun grew tired of chasing her,
the way she’d push and pull;
gorging on his gift of love,
she never got quite full

he retreated to the day
and left her to the night,
lacing sneakers of his own,
he ran to find his light

Stay In Your Lane

Stay in your lane, my life's not yours to scrutinize
Maybe you'll see things a little clearer on the other side of kinder tides...

How’s it feel on that distorted high horse
A place you feel in charge
Your life so empty, tight and constricted
Grabbing for power where you can get it
Belittling others for subconscious cheap high
Gives that nervous anxious space inside an exhale
So who was it that was so awful?
Mom or dad?
Who taught you to hide behind those walls
At the earliest ages?
Who were you hiding from or longing more of
Who has inevitably left you mostly destroyed and
Desperate needing to be heard and seen with all
Those accomplishments or lack there of?
Say it out loud

There is a concern of nuances, chanced
upon a greater thought, riding high
on a universal lie — truth bounced, glanced
off a shiny surface of smooth apple-pie

Propagation of seeds is doing well
careful watering the order of the day
a distraction from the manufactured hell —
that crime against humanity, planned to stay

From small seeds grow many varied things
some exude life — others vicious stings. 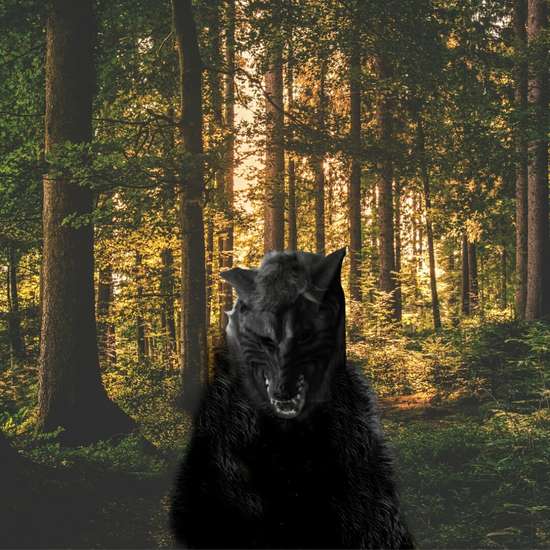 During the journey to the Two Point O Towers, the Dwarves asked many questions. Like,

Why is it so important for The One Poem ™ to be destroyed?!

"Because," said Lady Ahavarwen, "no one should be limited in regards to how poetry is written. An ABAB rhyme scheme in itself is not poetic, but MOAR!ON was convinced otherwise after being tutored by the Dark God, Blogmoth."

Ohhh! The very name sent shudders throughout the Fellowship.

"Yes," confirmed Jaragorn. "Blogmoth was extremely jealous of the wonderfully creative atmosphere the other gods had created in Muddle Earth, so he concocted a way of posioning it all. The Dark God disguised himself as a Poetic Guru who charged MOAR!ON an ungodly amount of gold coins in exhange for being tutored. It was actually a Pyramid Scheme. When it came time for MOAR!ON to pass on the knowledge he had gained, no one was interested. He had been DUPed bigtime."

Lord Melrond continued the tale, for she had lived through the Dark Age of Literature. "MOAR!ON was always afflicted with greed. He thirsted for fame as well as fortune. And when he discovered he couldn't make a fortune selling his verse or charging peope how to craft their own, he forced everyone else in Muddle Earth to write only ABAB rhymes."

"Everything changed for the better when the Spiderweb Mistress and the Dark Knight joined forces to end MOAR!ON's reign of terror," said Gandosh. "Hope was rekindled across the realm. Elves, Dwarves, Wyrms, and Men became united in a common goal to rid Literature of the likes of MOAR!ON and his minions."

PRadriel ended the lecture by saying, "And now that MOAR!ON has resurfaced, he is using the Eye of DUPon to search Muddle Earth for The One Poem ™. His actions will prove to be his own undoing, for liberating the Spiderweb Mistress will effectively blind him to DUGlo entering the lands of Moardor."

"Umm ... guys?" said Rosie Grace. "We lost the Dwarves about a half mile back when they saw something shiny in the Entwood Forest. You might as well have been talking to the wind."

Lunalass grumbled, yet her smirk was unphased, "Ughh ... dealing with Dwarves is like herding cats. Remind me why we brought so many of them along with us?"

"No worries," said Cool Merry Dude. "I will call draw them back here with my magical flute." He pulled out a foot-long reed and played a soothing melody.

Except the only thing that came out of the woods was a rather large groundhog the size of a Greyhound Bus.

Merry snapped his reed in half and tossed the fragments over his shoulders. "It wasn't me," he casually insisted while backing his donkey up.

And when reality finally sank in, they all cried together, "WEREWOODCHUCK!"

Lessons in life part 9….The importance of shoes and shirts

Apparently, trainers don’t do funerals
I said to myself out loud
whilst looking down at dead man’s brogues.
Well your Grandad won’t need them,
you’re lucky he was a size 8,
the soles had segs that clicked
as we carried the coffin,
I thought I might slip.

I missed the days of cherry blossom black
polishing Clarks on the back-door mat,
or the skateboard blow-out of one right sole
and the rain-soaked toe poke
of a worn-through school shoe.

White boots signaled the big hair days,
that snorted at life, burning away my youth
before I was fitted for blue starched collars,
and marched to the gates with unions to follow;
Shirts became redundant,
pungent under arm interviews, my daily muse
that and the depression of dole queues.

To manage all this, I needed a tie
something hard working to catch the eye,
a bigger slice of long-hours pie.
Steel toes were tough enough
to miss the children’s childhood,
trading story time and evening meals
for hours on a clock card.

Now it’s a Polo shirt, loose round the neck
with the joy of retirement for me to accept.
Before the corns come comfortable shoe’s
and the unbuttoned days of a life less confused.
Maybe a slip-on or Sketchers soft foam,
Just something lightweight for the old folks home. 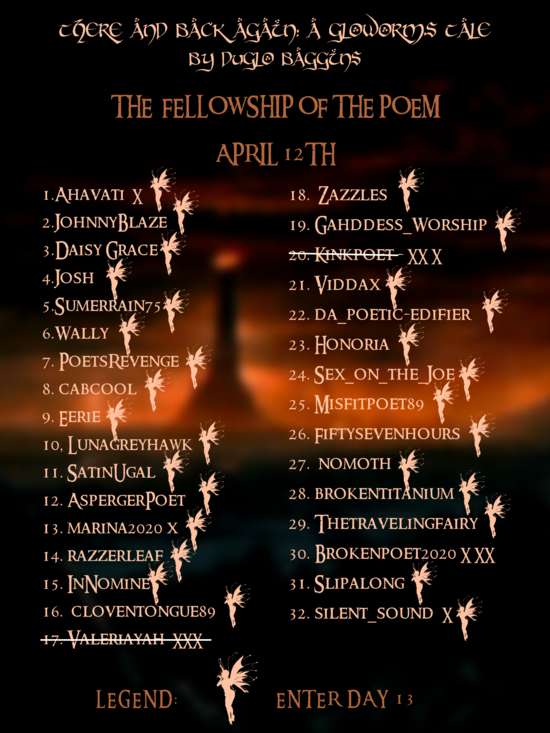 Greetings, Great Poets of the Fellowship! We've lost a fellow Poetess and another still is in critical condition! Take a few moments to honor Val, who is having some personal issues. She put forth a valiant effort, and there is no failure in that!

Also, put forth good vibes for brokenpoet2020, who seems to be AWOL!

If you have a fairy guide, then she is ready to lead you onward toward the halfway mark! You've almost made it, Fellowshippers: the peak of the mountain! All downhill after that!

Part II: Arc of the Covenant

Fluidity shifting, changing
balance in our mind, captivating
activating extremes
beneath our façade

Such limpid fruition
of genuine intention
. . .

[ Of Power And Rings ] Legacy

Monstrous minions
often mimic their masters;
are quite disasterous at being unique
though Free Willed despite

And let us not forget
the Dark Enemy, Sauron
who found it convenient
to impersonate Morgoth
until realization settled in
he was cheating himself
out of one nation
under his Eye
wreathed in fire
and worship from the entire
horrid horde of Mordor
likewise lacking boundaries
in the form of personal space

The Trek to Tyranny