What’s is it about Spring
that after a long harsh winter
brings with it reflection
I often wonder.

I suppose it’s the same
between Autumn & Spring
the circle of life,
it’s daunting as I get older,
and, older still...

My lifetime keeps moving ahead
I’ve almost made it to the finish line
accomplishing nothing more
and less than average.

Sitting in a dark hole right now
I can see the light, but it is bright
and It is blinding, overwhelming me.

Knowing the truth that I’m surrounded
by my own failure, and that I cannot runaway
from myself. Change is hard
mistakes are costly.

Midnight Train Away From Pain

Pendulums sway from blissful to melancholy
They don't hold back punches from anybody
Attacking the holy, the worldly & the wicked
At some point in time we'll all get afflicted

Everything around me moves in a blur
One
Minute I’m working the next, talk to her
After that it’s laundry and cleaning the house leaving no corner unturned no place for a mouse
Then it’s off to cooking a meal for others to enjoy
And cleaning up after it boy oh boy
Time for a shower and then off to bed
Where for a few hours I can now rest my head
All too soon the alarm starts it’s blaring
With eyes too bleary I get around and start caring
For my teeth and hair and put on work attire
This is not what I signed up for not to what I aspired
But for now it is what it really is
And that is all I can ask for this

a small warm light reflects on copper painted walls
the white noise hum of a fan drones in white noise
a sea of book stand tall and lay flat held by pine shelves
hanging wooden crates among a faithful army
of plants, candles, singing bowls
looked over by fairy lights paintings and photos
i breathe in your coziness
on the marshmallow fluff cloud that sails me away to dreamland
every night in this most sacred sleep chamber

Back and forth and in between
I think of what was and I tell myself that I'm over it
Till I'm provoked again and reminded
Beaten up by these thoughts, I take a hit

Rehearsing every moment
From death to death
Exhausting alternative scenarios
As to save or catch my breath?

Hindsight is 20/20 for the inventory taken of what we've lost
And I ponder the same thing of you I ask myself
Was the reward of failure worth the cost?

From broken homes to broken hearts
To reflections of the lost horizons of yesterday
Whether dead or alive
It seems as though everyone is passing away...

Iceland welcomed me well and truly,
the land lives with Nature spirits as the norm
a Minister for Elves would cause a storm
in another country but unruly
developers are stopped by law from newly
building where an elves’ habitat has formed —
such connection would need massive reform
elsewhere to redefine ‘acting cruelly’

January 2020 by hand I
started to dig a deep circle eight metres
in diameter, plus more to grade flat
a scrubbed patch of land near the gate, burnt dry
in a firestorm, managed to complete the
40 tons removal and then stood back.

On The Healing Road 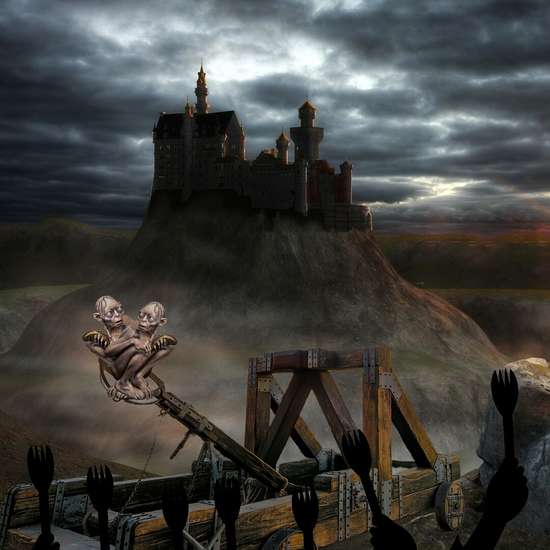 "Filthy Bat freak!" Smuggle and Duggle grumbled in unison. "He stole the Glowyrm who purchased the Precious Poem from the people who stole it from us! But ... we has a plan to get it back, now don't we?"

It was a rhetorical question as they crawled into one of the catapults being aimed by the Pork army amassing around Castle Mudbug. On strict orders to acquire The One Poem ™, the minions of Salamandar commenced with their attack.

The Frog twins gurgled with glee as the were launched toward the castle at 87 miles per hour, ensuring they would be first to arrive before the Porks did!

And within a matter of seconds and inches, they with shocked expressions sailed through the air right on by The Dark Knight. He was ziplining away from the castle into the forest, with DUGlo clinging to his back, and Ahavarwen and Jaragorn holding onto his legs. As Smuggle and Duggle splatted against a crumbling sandstone castle turret, our Fellowship members escaped undetected!

"Hahaha!" laughed the Dark Knight. "You really didn't think I could actually fly, did you?"

"Keep ... running!" cried Gimlyroo, swiftly becoming out of breath as his snail mail armor weighed him down. It had been quite a while since his daily jogs around the Irony Hills. "That Wallyrog is gaining on us!"

They were all heaving and gasping as the giant Demon of the ancient world snarled and flailed at their heels with its flaming critique!

"Puny Dwarves and Fellowship dipsticks!" the Wallyrog growled. "Your NaPoWriMo entries will not rhyme worth a damn! The syllable counts for each line will be inconsistent! Who taught you how to write poetry?! Don't quit your day jobs! And just look at all those mispellings, not to mention typos! Typos! TYPOS! MUAHAHAHA!" Its devilish laugh was ear shattering and concentration breaking! "Just hand me your Tropheees now before you embarass yourselves in April!"

And with that, Ganjosh the Gray Lizard halted in stride, turned, and drove his magic staff into the carvernous ground. There was a thunderous cracking-of-stone noise as he declared with great authority, "YOU SHALL NOT TROLL US!"

Unfortunately, his magic staff struck a waterpipe supplying western Muddle Earth. A huge geyser burst upward, washing everyone up a chasm to the surface.

Fortunately, it helped them escape the Wallyrog, whose flaming critique was doused in an explosion of steam.

Unfortunately, the added pressure of that steam sent our waterlogged Fellowshippers rocketing out of the ground in an almost volcanic like eruption.

Fortunately for Ahavarwen and Jaragorn, the explosion of water broke their fall as the Dark Knight's tights tore loose from his costume.

See how everything all works out when you just go with the flow? You need not worry when it comes to NaPoWriMo, for . . ."

"Oh, no you don't, Mister Narrator!" shouted Eerowyn to the heavens. "What about my #$@%ing Donkeys?!" 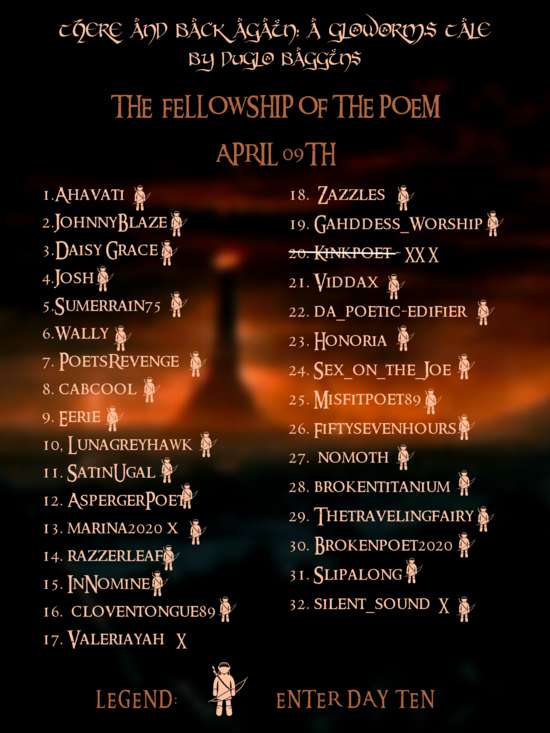 Greetings, Great Poets of the Fellowship! You are officially one-third of the way through!

If you've landed safely, then your Elf-Guide is ready to lead you through Day Ten! If not, make sure you adhere to the rules for last posting!

Part II: Arc of the Covenant

[ Of Power And Rings ] Power

without beginning or end
once embraced
---you may refuse to let go;
its hold only as strong
as the belief that you can't
live without it

Fools Gold;
an attractive prospect
often presented in the form
of an unremarkable, metal band

Today, after almost two years
I finally got the chance to visit your grave
The pandemic has stopped me
From visiting you last year
It feels like a decade have passed
Since you left us
Though it was only four years ago


On fabled Mirrowmere where stars appear
that crowned the king for which legends sing,
Whose the tower sat above the endless stair
the mightiest Dwarven kingdom ever sat there.

Where we mined the metal Mithril bright
in splendid seams, our heart's delight;
the metal's true name kept secret and hoarded
only a Dwarf's great fiend is it rewarded.

Yet all that glitter beyond gold
made us be too greedy and bold
and so we lost might Dwarrowdelf
and its boundless precious wealth.

Ode To Night I

“We are all like the bright moon, we still have our darker side.”
-Khalil Gibran


Cry with me, sultry night;
pray for the sentient things
crawling ‘neath your sight.
Glow your moon’s pale light.
Illuminate those whom pine for all
to be right and the fields of things
who count not the hours,
but wave in the wind endlessly
and futilely.
Pass me under safe care tonight,
let the voices lead me softly along:
a muted song.
Cry with me, sultry night.