The chemistry of cocktails requires planning,
the band provide the base, the floor space
of a wide-open glass filled with swirling fruit,
a subtle blend of syrup and elegance.

The tall tail feathers of courtship
bob like fishing floats, hands hooked
on the mouth of a would-be bite.
The pale mood bathes in half-light,
we step outside to exhale
the warmth of our fire, to steam
like racehorses after the chase.

The madness of desire constrained
by the cotton chains of etiquette,
my glance exposes your milk white chest
the rise of a thousand stars
reaching out for moonlight, falling silent
behind the promise of deep blue clouds.
On nights like these we dream as castaways
lost on the ocean, our small boat
drifting with the tide. We slip inside
for one more dance. 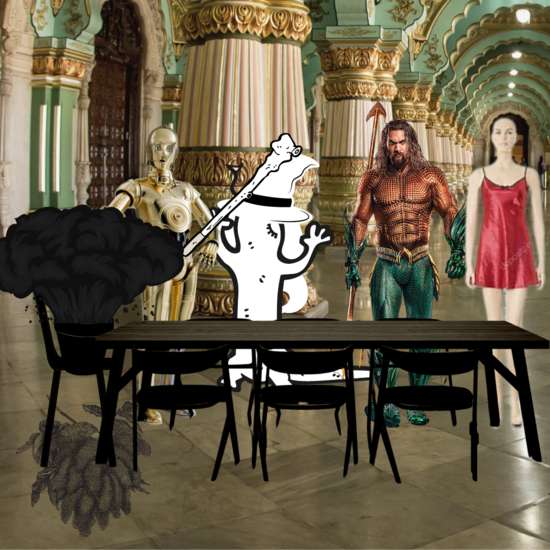 The White Lizard angrily stood up, aimed his magic staff as if a rifle, and loosed a magic fireball across the council table. When the smoke cleared, the potted cactus was nothing more than a pile of ashes in its chair.

Salamandar laughed and with an animated wave of his hand, said to his guests, "Oh, that little prick had it coming!"

He scratched himself inappropriately and wandered around the table. "Now, where is the rest of the Rainbow Coalition? I don't see Iggy Iguana with you. Charlie Chameleon? Nate the Newt? And where is that dratted Blabbergassed the Brown? He still owes me twenty gold coins! Cheapskate. All jabber-jaw talk talk talk, but never has anything in his wallet when it comes to picking up checks or tipping waitresses."

The Fellowship stood there listening to his rambling. They were the first real company he had in years, having had nothing more than inanimate objects and plants to chat with. Or so they were led to believe.

"Whatever!" The White Lizard scowled, surveying the group. "Is there a Dwarf convention in town? Or did I miss the Renaissance Fair this weekend? What are all of you people doing here anyway? You're interrupting my think-tanking!"

"We are in need of your P'lan Tier 3 Earthenet connection," replied Ganjosh. "A search for the Dark Knight must be conducted because only he knows how The One Poem ™ can be destroyed."

"The weapon of the Enemy has been found?!" exclaimed Salamandar. "Well, why didn't you say so! Please, walk this way!" And the White Lizard used his magic walking staff to steady his feet in entering the Grand Library. The Dwarves followed, doing their best to imitate his feeble movements.

There it it was on an absurdian pedestal - one of the few remaining P'lan Tier 3 Stones in the realm. Lady PRadriel breathed heavily onto the crystalline orb and polished it with her sleeve. She then gazed into it while her mind was firmly fixated on the Dark Knight.

And there the little Glowyrm was, smiling and waving, with his nose pressed up against the globe. Oddly, he was glowing much brighter than usual.

"Why, Mister Baggins!" cried Satin Gamjeez. "Whatever are you doing inside that stone and how the heck did you get in there?!"

Rosie Grace sighed and said, "Bless your heart, Satin." And she thought to herself, It's a good thing he is easy on the eyes.

Through the intermittent static of the stone's connection, DUGlo excitedly replied, "Two crazy Frogs tried to steal The One Poem ™ . . ."

"Ugh," PRadriel grumbled and slapped the stone. "Lousy signal strength. Does anyone have any tinfoil?"

"It looks like DUGlo is safe!" said Cool Dude Merry. "And if I'm not mistaken, the coat of arms hanging on the wall behind him belongs to the abandoned Mudbug Sand Castle located on the Muddle Puddle Sea coast!"

Salamandar scooped up the P'lan Tier 3 and pitched it down a long hallway. There was a loud crash sounding of dishes breaking. Puzzled at his bizarre behavior, they all looked on confounded.

"Fools!" huffed the White Lizard with a toothy grin of disdain. "I expected Ganjosh the Gecko to be much smarter than this. You played right into my hands. MOAR!ON, my new master, will be pleased that after a thousand years of searching, you have have handed The One Poem ™ to him on a silver platter!"

And before anyone could utter a reply, The White Lizard disappeared in a flash of light and smoke.

"Well, now whaaaaaaaa---." Dwarf Razzerleaf began to say when the trap door beneath the Fellowship's feet opened and everyone tumbled down a chasm. 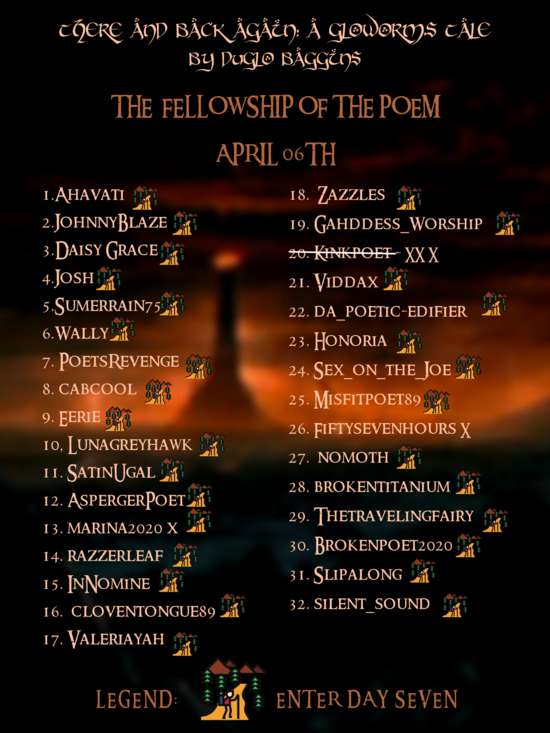 Greetings, Great Poets! If you've reached the Yellow Brick Road you may proceed unscathed into day SEVEN! If not, then you need to correct your entry prior to your 24 hour editing limit to remove your X. Elsewise it will remain, and the accumulation of two more will mean disqualification from the challenge.

You're 1/4 the way there, Entrants! You're all doing an amazing job! We've had only one casualty thus far, which is remarkable given the difficulty level of this challenge!

When you think you cannot continue, look behind you and see how far you've come! If you need encouragement or are experiencing doubt, reach out! Team NaPo is here to assist you over that finish line.


hanging In, Holding on

sweep the dust`s unwanted words,
the bariatric fat.
Not indulge in lumps of cake,
fit the guts restrictive band
in my vain attempt.
In that garret cold and wet,
the leaky roof that drips,
would be, the pail half full.
This could be your Holy Grail
So shear the rock face,
ache to find next footholds,
dexterity so not to slip.
Mind and fingers numb with frozen quotes.
The precipice so steep
Your hopes, burned toast.
Each stanza shooting from the hip,
or try to free a sticking zip.

Part I: Anatomy of a Cycle

We seek to unravel mysteries
of how we were created—
a timetable of our beginnings;
how we lived, where we went;
our extinct teeth unearthed
from swollen gums of dirt

But, despite earthly findings
it is Universal mysteries
that capture our attention:
moon cycles in bone markings
carved 32 000 years BC, answers
in ancient formations of caves


Four paws of peace you brought,
With hymns of silken pur,
Calming nervous systems
With playful tooth and claw.
Mischief maker, storm breaker,
Whole white loaf of bread taker!
Could eat the chicken and not wake her
When you did they’d give you more.
Handsome and regal
Face like, a little old man.
Reminiscent of samurai
In ancient Japan.
Loving and sweet,
Yet, could never be meek.
Stretched out you seek
To, hold onto her hand.

Life's reality
Is cruel, harsh and harder
Than you imagined

The Doubtful Benefit of An Over Active Imagination

Giving away the hours
Meandering gardens in my mind

Walking miles in fields,
fertile in wildflowers and ornamental grass

Running and plotting my escape
I would cherish a return
to innocence,

alas, it won’t happen-
too many false tales
Of that I am sure

What’s on the lesson plan for today I asked?
The professor smiled and spun the wheel
It landed on snakes and arrows
That’s when suddenly I began to feel…

The barrel of my pen grew and soared then became a feral sword
With words ready to burn and slay in a progression of chords
A thousand cuts I once bled with dread healed and lead me here
Saying: I have to keep on fighting without the sorrow or any fear

sonnets among my scribbles


when earth gives birth to light, a new day dawns
—the opening of a single giant eye
that watches, like a telescopic spy,
the busyness of mortals on her lawns.
her golden hour shifts violets and blues
beyond the gaze of local peasantry,
revealing novel shades of gallantry
that paint with orange, red, and yellow hues.
the world wakes up from laziness and sleep
to make its hay before fleet time dissolves;
a parliament of challenges revolves
around the grind of care that none can sweep

under the rug when evening shadows fall,
ere comes night with its dark, foreboding wall.

Focus on the sunny day's when the rainy days won't dissipate
Days when the weight on your shoulders feels like 2 ton crates
Make no mistake, they'll be rain, sleet, snow and hail (Hell)
It's during those times when your strength gets revealed

A Self Imposed Imprisonment


Beneath the mountains, deep in Khazad-dum
Unknown to us, we went towards our doom
Our resting place, not a mine but a tomb
Killed by the cursed creature of fire and gloom.

Our ancestors had mined too far deep
Awaking a fiend from its' foul sleep
The price of greed, it was set to reap;
Our lost kin and king for which we weep.

Lost to us the kingdom under mountain
Many an expedition sent in vain
Fated to be flame and shadow's domain
Until a time when Durin wakes again.

As the Prophet goes by THE MEASURELESS AND THE IMMEASURABLE

In the grand stream of things
you are a stone being tumbled
worn smooth not of imperfections
but of that which slows the water
as it flows around, so that your life
becomes much smoother, rather
than keeping events long desired
at bay with current deflections

And it may take hitting
rock bottom once in a while

Or it may take several
lifetimes passing you by

Taken away, gone by day;
every dream would not replay
even if it had the chance
it lost itself to one last dance.
We assay, to fate allay;
it rolled by in better days.
Somewhere, so long ago
we bared all we’ll ever know.

Yesterday, you were my fear,
now I know I am a gear
turning in your mechanism
holding fast in a cataclysm.
When, but now do I assess
all that speaks to my duress.
When I rise to meet a ‘morrow
merging with what is such sorrow.