Write a poem about the scariest experience of your life. All types of poems are welcomed.
Hi everyone!

Its been a while since I've posted on DU so I've decided to kick things up a little by hosting a competition.

Top three winners gets certificates via email and featured on my blog and Instagram! (this is optional)

Last week, as I walked home alone late at night,
I came across a dark figure in the shadows,
When it came in full view under the streetlight,
It was a woman dressed mostly in black clothes.

She had pale skin, jet black hair and red lips,
Like a luminous scarlet with so much appeal,
But this chick had curves, according to her hips,
I could tell this woman didn’t miss her meals.

“Are you all by yourself?” she said in a low tone,
With a raspy voice I thought she’d ask for a cigarette,
“Yes” I responded, “but my lady is waiting at home”,
That’s when she revealed a tight crimson corset.

“Wow, look at those” I said baffled inside my head,
But it seemed as if this person could read my mind,
“Look into my eyes” she said filling me with dread,
I felt a chilling shiver up and down my spine.

She smiled and that’s when I noticed something vile,
Her incisors were getting longer by the second,
Her smokey eyes now had a more cunning guile,
This woman was a vampire, I began to reckon.

“Come closer” her voice was casting some spell,
“I don’t want to” I said fearing for my life,
She said: “I can summon demons out of hell!’
And I replied: “Bitch you don’t know my wife!

…She will have my nuts in her hands
The moment she smells the likes of you,
And if that’s something you can’t understand,
If you bite me then I am royally screwed!”

“I am six hundred years old!” so she claimed,
Her voice was unsettling and so dang drastic,
“I can take anyone I want!” she exclaimed,
To which I said: “Great, that’s just fangtastic.”

“Look, here’s the deal, I know I’m just another meal,
You’re kind of hot and I’m just some poor old goof,
I’m not in the best of health and so I must reveal,
My cholesterol level is through the roof…”

Before I could finish my sentence, she lunged at me,
Sucking at my neck while I screamed “WHAT THE FUCK?
Bitch! I did not consent to this, it’s 2020”
And that’s the reason why I think vampires suck.

Then I had to go home and explain the bite marks.

Next week: She-Wolf Shenanigans
Written by wallyroo92
Go To Page

I was walking home alone late one night,
With cool clear skies under a pale full moon,
Thinking to myself: Why am I walking again?
I really need to get my car repaired soon.

And sure enough as I was passing by the park,
A sexy woman came out from behind some trees,
I said to myself “motherf… I’m in trouble now”
But I tried to play it cool and remained at ease.

“Hey, do you have a light” she said coming closer,
“I don’t smoke m’am” I replied when she was near,
“Are you alone tonight?” she asked curiously,
“Not again”, I thought but this time I had no fear.

I said “look, last week I got bit by a vampire,
I’m not trying get in trouble with my spouse,
The last encounter was surreal so please,
I don’t want to get put in the doghouse.”

“Why did you say dog?” she said upset,
Her eyes were beginning to glow in the dark,
And I, entranced by some magical spell,
Felt my feet failing me to get out of the park.

Just then the moonlight shined on her face,
As she began to writhe, thrash and convulse,
“Are you OK?” I said watching this take place,
Then the veins in her temples began to pulse.

“I don’t think that's a sign of Rona” I said softly,
I mean I was social distancing though I wanted to run,
However I was trying to be a Good Samaritan,
So I said “You’re having a stroke! I’ll call 9-1-1!”

Then she let out a blood curling chilling scream,
More like a howl, or a growl deep from hell,
And I like a dumbass stuck around trying to help,
Until her face and upper body started to swell.

She looked up at the moon, her features distorted,
Growing hair everywhere as if she was a were…
No, it couldn’t be, not two weeks in a row?
As she transformed it gave me a good scare.

“Fuck this I’m out” I said trying to run away,
But I felt her chasing me through the park,
And when I turned to look at her again,
Her eyes were now glowing in the dark.

By then her nails had turned to huge claws,
As she jumped and pinned me underneath,
The pretty pout she had turned into a snout,
With a salivating mouth full of sharp teeth.

There I was on floor ready to go see the Lord,
When I felt a small tree branch by my hand,
I picked up the stick and hit her in the nose with it,
Then she tilted her head as if trying to understand.

“You want the stick, stick, stick, stick stupid!”
She sat with her tongue wagging, it was just my luck,
I threw it into the street and she went after it,
But she got hit by an oncoming speeding truck.

I heard her yelp, but this time I didn’t help,
Instead I ran my ass home as fast as I could,
I still had to explain to my wife why I was late,
But hey it’s Halloween so she understood.
.
.
.
What’s this? A scratch…
Written by wallyroo92
Go To Page

There's a spectre haunting me
a ghost of a man from the past,
his death seems to have confused him
he thought his life could last.

He also thought that off to work
he was set that fateful day,
but someone had fixed him, but good
had made his thought all gan awry

Now a garage is a drafty place
so he shut the door down tight,
and waited, with his patient grace,
to be driven into the night.
Written by Insiderew (Rew)
Go To Page

copy and paste this link and listen while reading and as always, thanks for looking 🤗 https://youtube.com/watch?v=zczFoOBe1eQ

I yelled and I screamed
get-out you must go
they laughed in my face
then screamed NO__!
we don’t think so!

they said we are not leaving
we are here to stay
then it all started
they began to play!

Jumping, trashing
destroying my place
Imagine the horror
that showed on my face?!

paralyzing fear it
surged through my blood
OH MY GOD
I NEEDED A HUG!

so I thought quick
and grabbed my wand
banishing those demons!
forever begone! 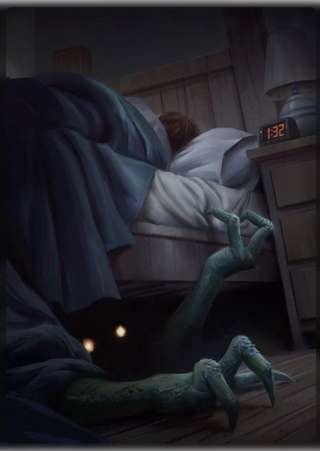 How cold and grey, clinging like a static charge
the mist it swirls and clears.
Muffles every sound, as my pace, and heartbeat
quicken. Pause, and for a second;
realise, that somehow I have a foreboding; enveloping a deep
suspicion.
My hands feel cold like clammy seaweed
dragged by the tide, and stranded on the shore.
My mind replays each horror film, that I have seen before.
Re-live every stricken victim's nightmare
the dark intent behind a mask.
The evils served upon young flesh
and just how close is that impending step.

Echo's bouncing off the alley walls
trapped in my fear, to turn or flee
to face the rape or go on bended knee
the  broken stalactites of realisation shearing,
in caverns ever deeper, quivering subconsciously.
In that brush. it hangs just like graffiti
vivid scrawled for all to see
Shaking like a setting jelly,
it's imprint ever stay with me,
stamped with all my unguarded vulnerability

Joined 1st Jan 2018
Forum Posts: 670
Thanks so much. a touch outside my norm and thank you again for the appreciation Regards Slip