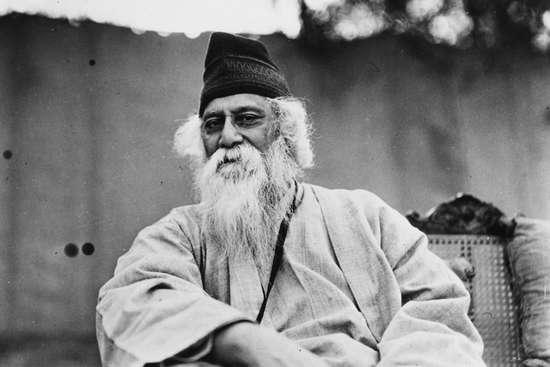 Part XXXVI in an ongoing series introducing serious writers of DUP to the most well-known poets, both classical and modern.

Rabindranath Tagore  ( born Robindronath Thakur, 7 May 1861 – 7 August 1941 ) was a Bengali polymath who went on to become a Nobel Prize-winning poet. He played a leading role in Indian cultural renaissance and came to be recognized, along with Mohandas Gandhi, as one of the architects of modern India.

Although Tagore prioritized poetry, he also made notable contributions to literature as a dramatist, novelist, short story writer, and writer of nonfictional prose, especially essays, criticism, philosophical treatises, journals, memoirs, and letters. In addition, he expressed himself as musician, painter, actor-producer-director, educator, patriot, and social reformer.

Referring to the variety and abundance of Tagore’s creative output, Buddhadeva Bose declared in An Acre of Green Grass, “It would be trite to call him versatile; to call him prolific very nearly funny.” Bose added, “The point is not that his writings run into a hundred thousand pages of print, covering every form and aspect of literature, though this matters: he is a source, a waterfall, flowing out in a hundred streams, a hundred rhythms, incessantly.”

On his 70th birthday, in an address delivered at the university he founded in 1918, Rabindranath Tagore said: “I have, it is true, engaged myself in a series of activities. But the innermost me is not to be found in any of these. At the end of the journey I am able to see, a little more clearly, the orb of my life. Looking back, the only thing of which I feel certain is that I am a poet (ami kavi).”

- Write a new Poem honoring Tagore inspired by only one of his poems.

- While you are allowed a maximum of 2 entries, only the best of your entries is considered viable for the trophy.

- Do your best to make us feel as though we are reading poetry by Tagore.  The more we feel you "capturing his essence" in "your own words" , the higher you will score. This scoring will involve choice of wording, delivery, subject material, formatting, target audience - a wide range of factors.

What is the "essence" we are looking for? It will be a combination of the poet's personality, emotional investment, and message delivered in the inspiration poem you chose.

1. Two entries per DUP persona allowed. Keep this thread clean of everything but entries until after the awards announcement is made. Comment on entries directly to the member's page if you feel moved to. Post any questions or concerns about the comp in the Classic Corner Discussion thread @
https://deepundergroundpoetry.com/forum/speakeasy/read/10855/

4. Any form is acceptable ( but studying the poet is advised ). While we accept Spoken Word and Visual Poems, please include a text version in your submissions.

5. You MUST tag your entries with the theme #RabindranathTagore. If the theme is currently not available, be sure to add it before the competition expires.

6. In your poem's Author Notes box, provide a title and a direct link to the one poem by Tagore that inspired yours. Without such, we have no way of determining if you were truly inspired by Tagore or simply swapped fresh words into his existing poetry ( which is a form of plagiarism ). This is a requirement regardless if you include a copy of the inspiration poem along with your entry or borrow its title. Failure to not include this information will automatically disqualify your entry.

7. You may edit your entry up until the moment the competition closes and is locked for judging. In fact, we highly encourage you take a few minutes to review your entry to ensure that it is error free in terms of spelling, grammar, and punctuation, and adheres to these guidelines.

Seeking interpretations of the poem
"The Last Bargain" by Rabindranath Tagore,
Mister Sykes navigated the classroom
as if Alladdin floating on his magic carpet.

Susie Speckledbottom zealously raised a hand.
It's about how power always fails to deliver
on it's promise of alleviating your hardships,
symbolized by the King in the first stanza
flaking on hiring a man desperate for work.
Proud of her answer, she beamed, riding
upon a ninth cloud of her own self worth.

yet hardly satisfied with the intuitive response.
Why is that? he queried, quite down to earth
now in his pacing, same as anyone in his shoes.

Johnny Proudfoot couldn't help blurting out:
Because Money is Power; the more you spend
towards easing burdens, the more you expend
time and energy earning it back! This is evident
by the man counting gold in the second stanza
who didn't want to toil in the afternoon heat!

Sykes, feeling a migraine developing, rebuttled.
Neither did the narrator turning down his offer.
He rubbed his temple as if it were a genia's lamp
wishing for the nagging feeling to go away
while meandering through rows of desks
occasionally glancing at the overbearing clock.

Ann Architect timidly raised her hand.
His poem is about doing what you love
for the sake of enjoying yourself at play,
without expectation of anything in return.
Thus, you become truly free of obligations
---no longer is there need for money or power;
time lost and energy exerted is inconsequential.
The final stanza is very self explanatory.

However, he suddenly whirled about
with a crazed look in his eyes reminiscent of
Victor Frankenstein or Gene Wilder or both
simultaneously grappling great mysteries of Life,
hands slamming hard upon Bobby Rottenbrain's desk!

But what of Stanza Three that reads:

"It was evening. The garden hedge was all aflower.
The fair maid came out and said, "I will hire you with a smile."
Her smile paled and melted into tears, and she went back alone into the dark."

Can anyone tell me what this means?!

Bobby sort of wet himself, while the remaining
students nervously glanced at one another.
The entire classroom was deathly silent.

The teacher sighed in exasperation, defeated.
I was hoping you could tell me, because even
I don't know.

The bell rang.
Children more than less fled the room.
On the way out, Abby Rhodescholar
handed him an apple from her bookbag.

Don't worry, Mister Sykes,
she said with a smile wide beyond her ears.
Now that you've asked the question
the answer will surely come
when it is time for you to know.

A beautiful call from deep in your soul, I listened but did not hear.
My anger rose at your simple requests and you left with an ache in your heart.
When your love burned to bright I hid in fear of being blinded.
Now, I sit alone in the dark in painful regret for what might have been.
Written by anvinvil (Anvillan)
Go To Page

The absence of the anxiety of the unknown is what I wish for all my people and the loss of the ponderous weight of uncertainty of things to come.
Let false dreams in the nighttime of future realities and potentials be ignored.
May the curse of eternity pass us by.
Stay the course though the way be hard and the end be infinity
Vanquish the journey charted by fate, fixed and prescribed.
I wish for a world of individuals without constraints, free to be themselves, outside of what may be acceptable to some cosmic force from the sky
Written by anvinvil (Anvillan)
Go To Page

For the life is in the blood.**

From an early age, I'd an aversion to blood-
pooling plates from the rarity of steaks;
tinged lips bathing in the carmine river
of conquered meat between teeth

By teenage years, I understood blood;
it struck chords within my solar plexus—
a many-pointed star of immense knowledge
resonating amid a lost recollection of Love

Nothing ever dies: it survives in crawlspaces
of life, beneath the skin of each birth;
its ichor passed down from generations—
awakening within the proximity of itself

We do not choose those we truly love—
only what we receive from each offering;
we celebrate a reunion of joy—
or, suffer the agony of letting go

Walk onward in this world. . .
yet, such recalls are not only human

They're loyalty between a bear and wolf—
unlikely pairs whose alliance is forged
by unexplainable phenomenon beyond
our homo sapient reasoning: bonding

between a kitten and duck; a dog and fox—
because the soul knows what a mind forgets;
blood is the life, the mechanism of flesh
fueling every sentient being on earth

It is no mystery to preceive one another
after death;  your sub-conscious waits
rather than settles for less; it's innate—
instinctual when honed by life after life

and could never be explained in words—
only felt within its vast array of cells;
those immortal red and white messengers
carrying eternal scrolls of ancestors—

~
Written by Ahavati
Go To Page

In hurriedness and clamour

A sculptor.? Make such pale cool limbs
with beauty and such curves endowed.
Could I pause, in hurried clamour
whereby pray to likeness.
Shallowness to skin and spirit warm its core
a mortal cloud, plucked from the dawn.
In supplication knelt before; I knew.
by whatever, the everyday and commonplace,
to blink and rub the eyes.
Find and hold the Buddha's countenance.
Transcendental ingot borne.
Heart still beat the pulse.
Handed, gifted on the thunders clap,
refreshed in quietness.
The pool beneath the waterfall,
the weight of beauty from the rush,
after all in love our hands are clasped
Written by slipalong
Go To Page

In conscious moments, my fabric is forgotten;
the spirit is no longer fine within me. I am nothing,

dust of the earth, fashioned by the One who blew life
into this soul- what have I to offer? These hands are

empty, this heart is broken, my eyes have fallen away
in tides of deceit; I've abandoned the one true Love.

It is in my house of foolish affliction that I hear Your still
voice, and a yearning for grace washes over me.

Divinity does not ask for ascetic actions. The asking
is of love and goodwill, truth and courage. In my

hollowed cup there is room for You to pour Your
mercy; I have found favor with my Beloved.
Written by Eerie
Go To Page