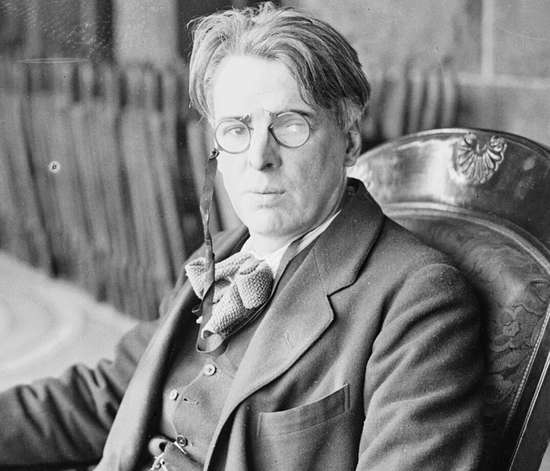 Part XXXIV in an ongoing series introducing serious writers of DUP to the most well-known poets, both classical and modern.а

Although he lived in London for 14 years of his childhood, Yeats maintained his cultural roots, featuring Irish legends and heroes in many of his poems and plays. He evolved into a nationalist; in essence, he was gung ho pro Ireland.

Yeats joined the Golden Dawn, a secret society devoted to the study and practice of the occult, metaphysics, and paranormal activities during the late 19th and early 20th centuries. Focused on theurgy and spiritual development, it inspired many present-day concepts of ritual and magic that are at the center of contemporary traditions such as Wicca. The Golden Dawn became one of the largest single influences on 20th-century Western occultism.

He spent almost three decades courting Irish nationalist Maud Gonne. She turned down 4 marriage proposals from him. Later, he proposed to her then 23 year-old daughter, Iseult, who likewise did not accept. He eventually married Georgiana Hyde-Lees, another Golden Dawn member.

Most of YeatsТs poetry used symbols from ordinary life and from familiar traditions, as writing and a need to interact with the living kept him tethered to the physical realm.

Write a new Poem honoring Yeats inspired by any one of his poems ( and only one per entry ).

Do NOT copy paste your poem to the competition. It must be linked to your page with the below information.

While you are allowed a maximum of 2 entries, only the best of your entries is considered viable for the trophy.

Do your best to make us feel as though we are reading poems by Yeats.  The more we feel you "capturing his essence" in "your own words" , the higher you will score. This will involve choice of wording, delivery, subject material, formatting, target audience - a wide range of factors. аа

2. No erotica; this is open to all ages and can't be viewed with an ECW ( Extreme Content Warning ). аа

4. Any form is acceptable ( but studying the poet is advised ). аа

5. You MUST tag your entries with the theme #WilliamButlerYeats. Failure to do so will result in your entry being disqualified.

6. In your poem's Author Notes box, provide a title and a direct link to the poem by Yeats that inspired yours. Without such, we have no way of determining if you were truly inspired by Yeats or simply swapped fresh words into his existing poetry ( which is a form of plagiarism ). Failure to not include this information will automatically disqualify your entry.


My other accounts at DUP are Magnetron , Anarchitect , Psycotic Mastermind , & Mary Walker
Posted: 2nd September 2020 3:27am

Now we are talking *my* subject matter , and language...

I do believe this is one I shall pursue with a purpose...

I question myself, am I fit to love
does love indeed fit in me?
The question floods my mind
with answers not forthcoming.
LoveТs  not found unless love is sought.
Search the world for that princess true
Your fate, her fate become one fate.

Love is such a winding path, through
times both good and bad, itТs
course unknown, the direction blind.
But begin I must, begin in this
adolescent fog to feel my way
for certainty that comes with love.
and perhaps answer my own
question of why. And how?
Written by anvinvil (Anvillan)
Go To Page

A mothers love can weave a dream
of stars and futures fine.
A hope thatТs heaven sent but
resolve thatТs based in time.

Alone she sat, abandoned flat
though smiled through all the pain .
Her hopes for me wove a cloak
that ringed my infant heart.

The dream she dreamed for me
was fantasy and profound. But mothers
thoughts of future wonders for
newborns know no bounds.

When left with child a sadness rose
though tears that fell were joy.
They quenched my thirst and
bathed my soul against the rising worst.

So dreams she had and dreams
she gave to me without reserve
for life, for love, for all thatТs good
plus a crown of stars supreme.
Written by anvinvil (Anvillan)
Go To Page

A posy of lavender

Come rescue me, find in me a troubadour
a verse upon the strings of lute
an apparition rise and be disposed
and clothed so pure without dispute

The gilded lark to reach her ear
and carry my proposal in its beak
just for love, lovelorn in despair
lavender its power so unique

Vain hope to clutch at empty straw
will she grasp the posy that I toss
the beating heart wings so it soars
or will the shutter close, and all be loss

Hold the herbs of love close to her nose
in frame and glass its picture plain
its essence gain a foothold in her soul
melt her image, haughty, caught in bold distain

My couplets ring and be sublime
repeat my song how many times
the taste the pleasure of her kiss
not vinegar but wine, if I persist

will she use semaphore, guess my demands
colour of her robes will I see revealed
a dress of red or blue so cortisaine
or virgin white, as I gasp relieved
а
Written by slipalong
Go To Page

She Begs the Night

A place most requisite

This much craved solace of a place, sought to alone the fight on fields of mentality's wars thought to break me, I love.

Hurts breeding with anger remedied, comforts the easing of mind as one in witness to the flight of sun shown in good omen through wings of a dove.

Falling armor weightless into it's feathered tales weaved not so false and far, whereby my descending skeleton is broken upon it's peace.

Nestled and rested mindings coils in sanctity, hidden and unnoticed in my return to innocence warmed beneath the earned grays safe in it's weathered fleece.

Giving ear to tongue and thought, marinating contemplation and outstretched reckonings of the wrongs to right themselves as they ought. а

Abuse halts at the threshold before anviled doors lined with salt, striking the worlds attempts to wound and maim.
Strengthened and restored are the cornerstones of self and heart in this a quiet place of laid burdens and wetted flames.

These such places existing for the some, unknown to the uncreative and needed by the known and ignorant human in all. When is found unlucky and without signatured belonging, exists the exhaled perils of a mind before it's fall.
Written by Darkpoetria (DarkOakPoetry)
Go To Page 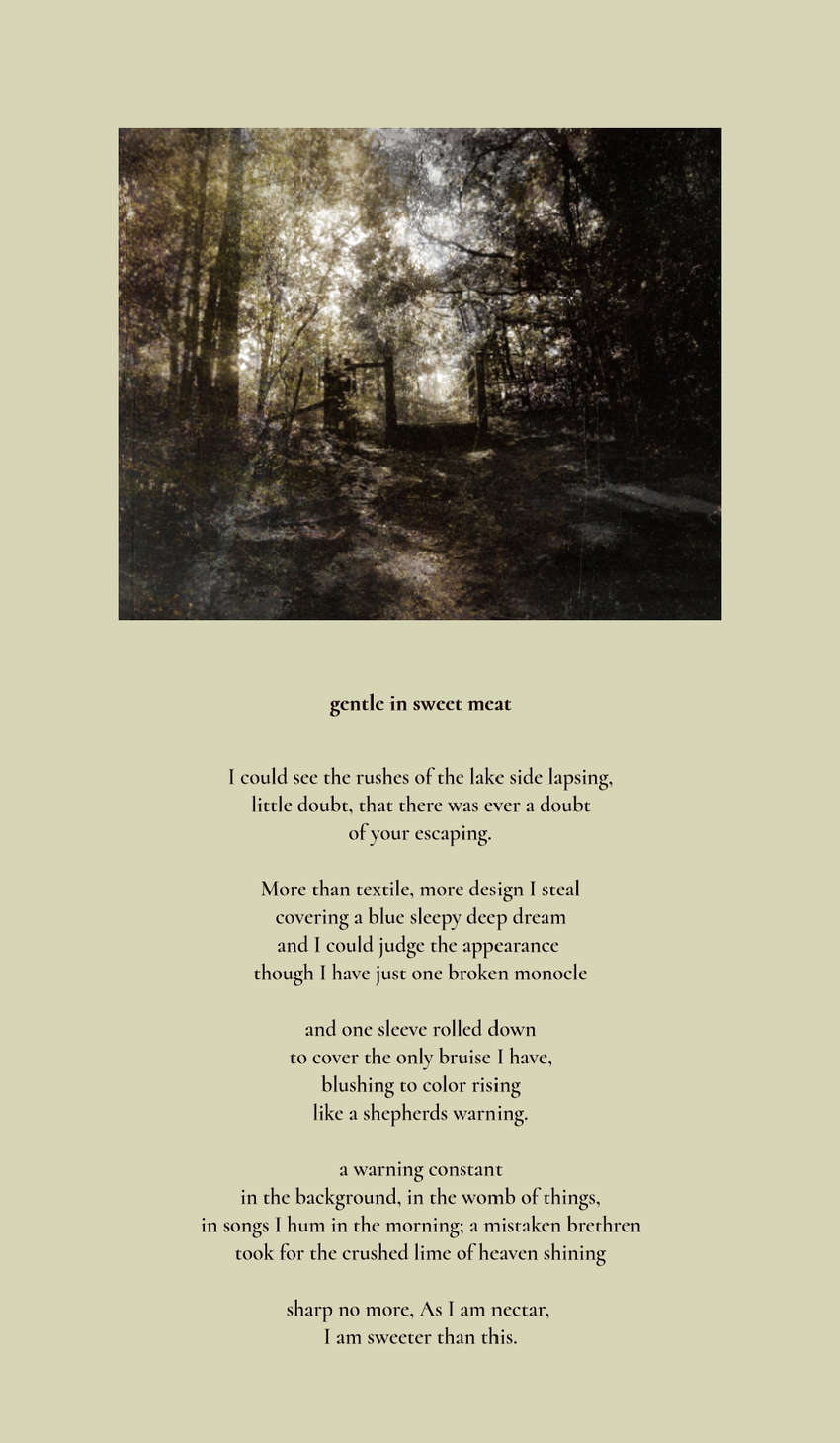 Left brain analysis of creation
Strips away from the center of my heart
The bleeding artistsТ brush, replaced with a chart
That rambles on about numbered equation,
Stealing my time, my inner essence of life-
Bringing into sharp relief the bitter strife
Betwixt left side and right, a dead sensation
Eating its fill of half-formed canvas, smeared
By obligation, to which IТve adhered
To lackluster forms, banal translation
Of artist by analytical mind,
Leaving me dry and perhaps less refined-
To drown in pools of artistic stagnation.
Written by Eerie
Go To Page 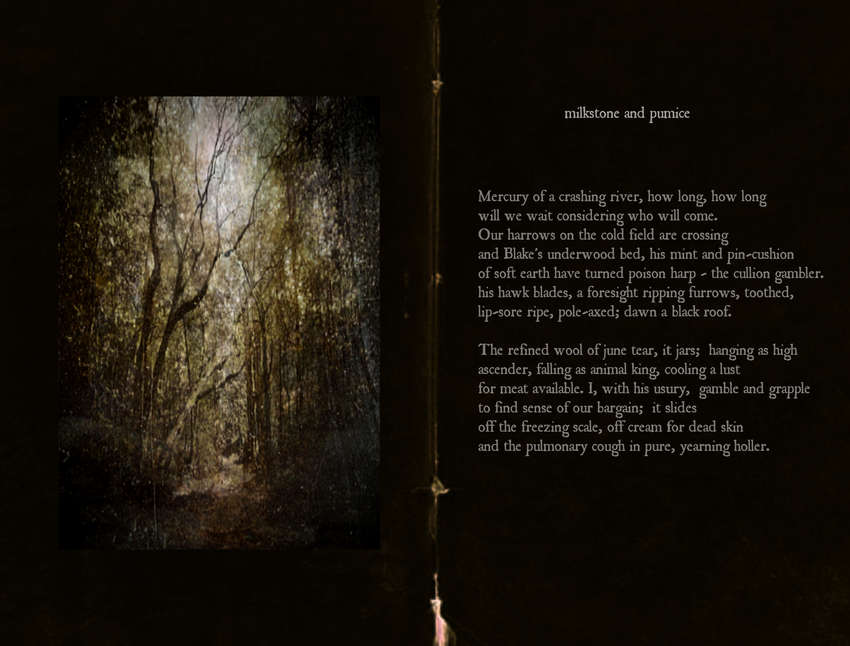 I armor myself
Smeared in herringbone and tweeds
From fashion mags and runways
My front and back;
Are poached and copied,
Microscopically seen.
The aperТs delight.
The burden is theirТs,
I have way more at stake
Exposing my truth.
Written by Honoria
Go To Page

How each step for her was light
Whence she stood bathed in night;
Sorrow worn hast cast away
All its trappings gone by day.
An odyssey did she endure
Given to song sung long and pure;
Her agonies bled to greenest floor
Escaping among her paramours.
Around her feet unbinds a wish
Along a sweet unwinding tryst;
She in angel's arms enwrapped,
Eyes meet Heaven's golden cast.
Now, in the 'morrow too will rise,
She, no more a man's prize;
But carried in a wayward gauze,
His silken dreams on which to pause.

'...Surely there are men who have made their art
out of no tragic war ...

Those men that in their writings are most wise
аown nothing but their blind, stupified hearts'.

а
A man had walked within a creed
Holding hands as mercy bled;
Every known within a seed
Unshelled as such to earthen bed.

Sweet within his concept lie
Her temperaments for his reply;
A man removed from sustenance
Is never brought from countenance.

Timorous, that chaff of reed
That any man undone could bleed;
To lift a voice as soft as Eve's
And wanton, fall upon his knees.

But greater things beyond him lie
Within the air of fairest sky;
And to his will they too must die
Wherein lives his future bride.

So, to measure by his rule
Surly ways begotten of fools;
A fool in love is greater than
What monument is God in man.