Poetry competition CLOSED 1st May 2020 11:03am
A public vote has been requested
Go to page: 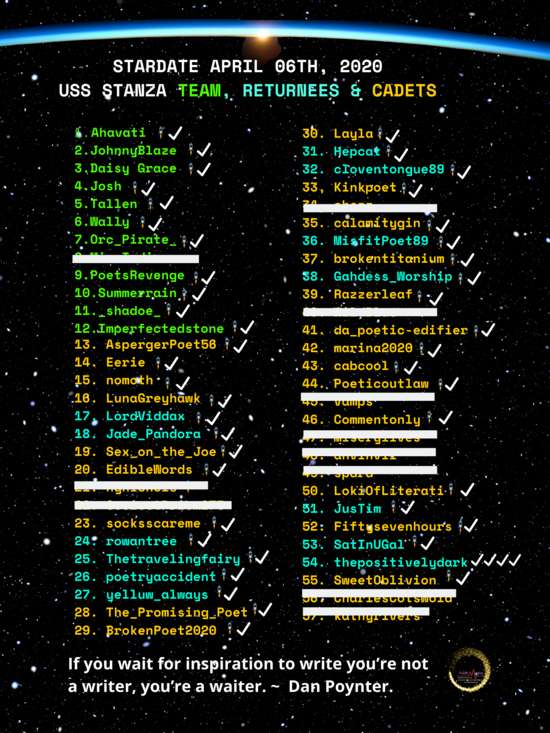 Good morning, Participants!  Congratulations, if you see a check beside your ( invisible ) little rocket ( or lollipop ), you've successfully made it to day seven, which will bring you 1/4th of the way home if you make it through! 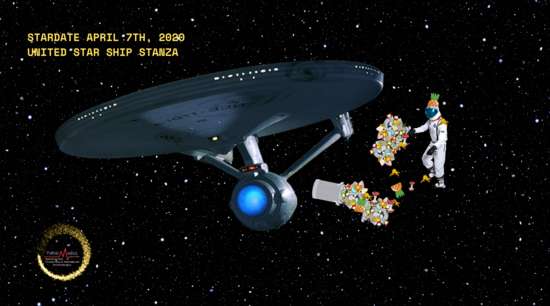 "Have no fear," said James T. Blaze in his duct taped Captain's chair. "We can engage the Warped Drive and be on the other side of the Universe in a few minutes!"

However, Spock-josh was apprehensive about taking any unnecessary risks.

"But Captain, without a properly calibrated End Stop Mechanism, there is a ninety-three percent likelihood of punctuating the fabric of Space and Time and creating a wormhole."

Rear Admiral DUG was very excited by the prospect!

"Sir, it's not that kind of a wormhole," Warfyroo whispered in his ear.

Dispirited, DUG sank back into his chair.

"No buts, no guts, no coconuts nor glory!" Blaze declared and hit the BIG GREEN BUTTON.

Being color blind, he pushed the BIG BLUE BUTTON instead and emptied the trash compactor. A few moments later, T'PoetsRevenge returned from her spacewalk covered in upside down pineapples and fostered banana peels.

Commander Deannavati - aware that Poetry waits for no man, woman, or worm - pushed the actual BIG GREEN BUTTON and the USS Stanza lunged into Typer Space.

"Goddammit!" hollered Poppykat through her communicator. "I'm still on Rhymulus! Is anyone going to beam us the fuck up?!"

Just then Redshirted chezz disappeared down the throat of a giant Venus flytrap on the other side of the sign that warned DO NOT FEED THE PLANTLIFE.

And it was AFTER doing a u-turn in the parking lot of the Typer Space Bar, returning to fly over Rhymulus, abd beaming aboard Poppykat - then Then THEN! the Poet Wardens were FINALLY on their way to recovering the twice stolen Muses and once stolen Webmistress.


My other accounts at DUP are Magnetron , Anarchitect , Psycotic Mastermind , & Mary Walker
Posted: 7th April 2020 11:58am

Echoes of her left
through frayed privet, along desire paths,
in a painted flowerpot filled with soil as tea.

She sails, freedom oozing out of her low legs,
pinecones kicked - hard as footballs,
baked open in Spring Sun.

Bundle of wonder
orders plastic hippos in and out of terracotta pots.
She plots a new game.

I miss their sway, skin against infinite lapping,
another life, a bluer journal,
a stranger muse.

"Let's go." She calls joyfully and I go
because I can,
have no other plans.

We thought they had died off,
like the Sunday lunch invites
spooned into gravy, smeared over lamb,
relaxing after with a good red
while the dog cried for leftovers.

There's parts of our garden
I haven't visited in a while,
too much work, too many weeds
but today there's a southerly breeze
that takes me back to that table.

Just for a moment you are with me
and I hear the kitchen clatter,
see your faces, each in its own place.
I follow that path and find you
not gone at all, just out of sight.

I shout to the house
"Guess what? they came back"
crush a handful and inhale
as if to store more moments. "Thank you"
I whispered as if the leaves could hear me.

you know what I mean
the mythical thinking of what if
what if I was a fire that never went out, never budged an inch
a hiss from the crack in the sunburnt sidewalk
mid summer where every street corner is another possibility
you squandered

But It Was Good

While at the local five and ten
We’d drop a rival with a dime.
But it was good to know you when
It was spent youth with all its time.

It seems forever since we talked;
How girls were jealous of your friend.
Because on Facebook you don’t block,
But it was good to know you when.

A cousin also uses this site under the username Heaven_sent_Kathy, so please check out her writing. — Charles Owen Lawson: “All poets, I believe, are scientists in disguise.”
Posted: 7th April 2020 3:35pm

Chaos is the order of the day
Overcrowded hospitals and overworked frontliners
Volunteerism is called out by the Government
Individualism is discouraged,  Unity and cooperation is required this time
Deaths are increasing in number day by day

No country is prepared for this pandemic
Isolation and social distancing is the norm now
No stone is left unturned in fighting this virus
Every possible drug has been tested and tried
To Cure this dreaded disease
Each one is responsible in stopping the spread of Covid19
End of this plague is not yet in sight, staying at home helps to keep the virus at bay
Now, more than ever we need to be strong and healthy and to keep praying for the world, for our life today

safe warm
secure in the egg

or
dead
or
am i both?

is life or
death affected by
an outside observer?

(quit  staring at me quahog)

is the kitty
alive
or
dead
or
both
or
neither?

does it matter
if i look in the box?

does the fact that
i take a peek
affect the outcome?

if i sneak a look
and the cat is dead
did i kill her
or was she already
dead?

if someone else
looks is the
creature still dead
or alive?

is the contents
of the box
a realm

of infinitely
possible kitties
or is there

only one poor
lonely/dead
kitten?

does it matter
or wave?

if you want/need
to know
why haven’t
you
opened the box?

hurry! the
kitty is waiting
or not

Double posting because of internet failure causing me to miss April 3rd to 6th.

Aunt Rhody is a woman
Who sees a lot of devils in a lot of things.

But also in men -- especially those drunken and
Slurring words daylight,
Calls of the flesh --
Carnal she says,
And in this city
There are many, she told me --
Killers, and thieves, and
Men and women like Lily who
Comes and leaves as they please and
Then she jumped
To stories of clown freaks, costumed freaks
Night stalking.

Aunt Rhody warned me.
Her home is my home for now,
That's the thought, and what
She told me.

Loud and vicious in their attack
Of each other --
A learned move,
A learned tactic --

A booming echo from my childhood
Reverberating
My new shell --

The pulses of my
Skin and bones hurt me;
This was no home.
It was her voice --

It was Aunt Rhody's.
There were days where what would
Travel through the walls
Were hushed vitriol, slowly dripping acid --

And most where their mouths
Were deafening cannons to my soul and
Probably theirs.

It was Aunt Rhody.

Idiot, dumbass,
Fucking waste of space --
All these spat to your face --

There was a numbing
Through the years, I guess.
But 'til now,
A heavy unpleasantness.

The children whine and cry
Again
Like yesterday and all the other days,
And expertly point their fingers,
Expertly pull each other down.

Aunt Rhody's hell was taught
And passed down and
All her kids are now
Giving each other their little hells.

Aunt Rhody was a woman
Who saw a lot of devils in a lot of things.

As I walked my way to my classes,
Out of their hell cluster --

No one knows its name,
Perhaps it doesn't have one,
But what most knew was --

The havoc it brings
When it escapes out of its cage,
When it sings.

Mr. C's desk was almost full,
But I managed to
Put down my papers,
Stacked neatly, quietly.

But the bird, the bird
With its cage beside me --
Decided that today
Was my day.

The bird flew out and
Pecked at me, made
A mockery of my neat stack,
Clawing and cawing,

As my legs tried to
Carry me away from
The chaos the darn bird was
Determined to give me.

Oh city, what more hell must you give me?
Is there no pardon for a girl --
Sleepless with little sisters bawling,
Toxic and eating away --

What fresh grass had I hoped for?
Here I was running down corridors --
The bird still in pursuit of me --
Good god, why me,
A turn right to history, and then --

A wall, no a solid chest --
A man just out of his office.

Then, feet failing, arms around me.
Up --
Eyes of green,
Of grass,
Of that first day.

The man --
With the hope and the dance,
Here he stood,

A feet away,
The bird landed and squawked.

Sleepless Nights in The Devil’s Playground
The 4 Horseman

The Every Day: Anatomy of a Migraine

“love is another soul recognizing when your own is weary and aching, and then endeavoring to act.”
-Anonymous

when the weight
of my own shoulders
makes a prison of my bed,
love meets me in the dark
where it finds me
-wandering, lost-
and it tries it’s best
to carry me out
into the brightness
of the daylight;
love is devotion,
followed by action

love is
the first sip of hot coffee
made exactly the way I like,
set quietly on the bedside table
as I stretch lazily
under warm blankets
on still-crisp Spring mornings;
it is an invitation to come and play
while the sun shines,
waiting eagerly
to see me smile

being loved is
padding out to the kitchen,
remembering the trash
you forgot to take out
and finding it already gone;
the napkin under my cup
with it’s hand-drawn heart,
will be discarded
long before the the memory
of its enduring message

connected
to (my)
impermanence?

Perhaps
it’s a resolve
which might
be
irresistible
immovable
& open to
interpretation?

hopefully
(always)
leading me
to kindness.

i am, all of me,
void of self-image
impermanent

an illusion
on this orb

burn away the
dross of me
and all that
remains
is
love.


“If you want to find the secrets of the universe, think in terms of energy, frequency and vibration.” ― Nikola Tesla
Posted: 7th April 2020 5:40pm

There wasn’t anything extraordinary
of the moment, mother calling me in
to have that talk which every girl for
generations have known,
the inevitable change to womanhood.

Although, the day was as bright as ever
and sounds outside clattered with same
flittering tempo, comfortably allowing
ripples of echo.  Her voice was quieter
and the words were wisely measured
“It only gets better with time and in time
you will learn one must make choices.”

She had loved once and once was enough
in her lifetime.  Blooming in hands tender
yet, strong.
She rouged her lips, perfumed her skin
dressing in red because it was the color
he adored and she adorned his desires.
My father cherished her and the luck
bestowed, fanning the spark
to never cease the fireworks.

I’d watch them from the corner of my eye,
in disbelief.  Happily ever afters do exist.
But—how could I tell mother that I’ve split
more wishbones than one to free the bird
with broken wings rattling in cage of bones
who no longer recalls, the songs of the heart.