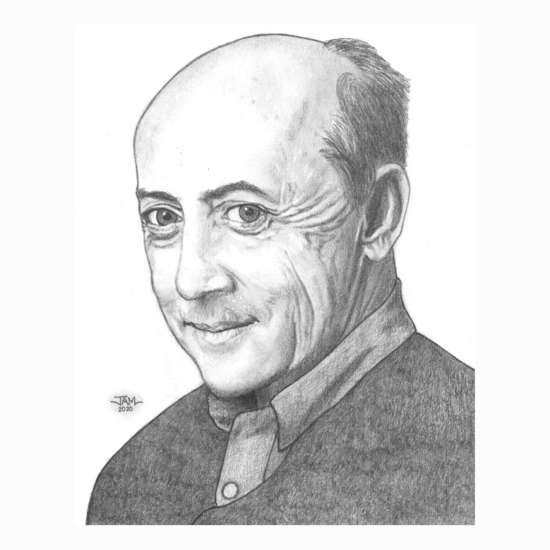 Part XXVI in an ongoing series introducing serious writers of DUP to the most well-known poets, both classical and modern.а

William James Collins, known as Billy Collins, ( born March 22, 1941 ) is an American poet, appointed as Poet Laureate of the United States from 2001 to 2003. In 2016, Collins retired from his position as a Distinguished Professor at Lehman College of the City University of New York after teaching there almost 50 years. Collins is the Senior Distinguished Fellow of the Winter Park Institute at Rollins College, Winter Park, Florida. Collins was considered as a Literary Lion of the New York Public Library (1992) and selected as the New York State Poet for 2004 through 2006. As of 2018, he is a teacher in the MFA program at Stony Brook Southampton.

Collins, known for his sense of humor, is also the inventor of the Paradelle - which began as a hoax, but eventually became a fun ( and very challenging ) form to complete. The inherent challenge became composing a paradelle that resulted in a comprehensible outcome.

Write a New Poem honoring Collins inspired by one of his poems. We feel listing particular poems may be constricting, and want you to follow the inspiration wherever it leads.аYou are allowed a maximum of 2 entries.

Do your best to make us feel as though we are reading poems by Collins.аThe more we feel you "capturing his essence" in "your own words" , the higher you will score. This will involve choice of wording, delivery, subject material, formatting, target audience - a wide range of factors. аа

2. No erotica; this is open to all ages and can't be viewed with an ECW ( Extreme Content Warning ). аа

4. Any form is acceptable ( but studying the poet is advised ). аа

6. In your poem's notes, provide a link and a title to the very poem by Collins that inspired yours. Without such, we have no way of determining if you were truly inspired by Collins or simply swapped fresh words into his existing poetry ( which is a form of plagiarism ).

***We are no longer accepting entries inspired by multiple poems *** We feel that such resulted in weaker entries. Also, it became time consuming when researching as many as four poems per entry during analysis.

LASTLY**** ALL NON-ELIGIBLE ENTRIES WILL BE REMOVED. This is not a competition to deliberately ignore guidelines so as to advertise your work.

[ Classic Corner ] This Poem Is Seriously Ducked Up


а
He shows up from out of nowhere,
of dazzling blue once the storm passes by.
Approaches with a smile, eyes of crescent moon,
offering a hand of strength and of mirth,
as honest labor of brotherly love.
а
I could be overthinking an uncommon sight
added to an otherwise common act.
а
Besides, thereТs nothing out of place а
when it comes to Winter at this time of year,
with my neighborhood inundated in white powder.
And I donТt question his abbreviated attire,
a free-thinking soul such as myself.
а
But has he not got things turned around
in the scheme of temperatures?
а
Still, off we go clearing my driveway,
shoveling without stopping for a meditate.
Serene, with a sense of serenity, opens his face,
while it is our own man-made flurryТs arc
that blurs each other in the crisp air.
а
Working under Heaven than indoors,
I call out in the brilliance, the Buddha digs.
This is why we are born, with Nature in Winter,
I raise my free hand but he concentrates.
The way to Nirvana is via driveway.
а
Better take the car in this weather;
the heater doesnТt work but the radio does.
а
We go nonstop until the day is noon.
With my endless, run-on definitive larks,
and him in a simple, quiet place of harmony.
All about us, the snow castles we made,
itТs then I hear him say like I would do;
Can we go inside and read poetry?
а
By all means. Anyone in particular?
The Buddha serenely sighs, eyes seek
as he bows in a momentТs contemplation,
and the dazzling blue of midday sky
casts the blade into fresh snow.
а
а
Written by Jade-Pandora (jade tiger)
Go To Page


A cousin also uses this site under the username Heaven_sent_Kathy, so please check out her writing. Ч Charles Owen Lawson: УAll poets, I believe, are scientists in disguise.Ф
Posted: 4th February 2020 10:08pm

The Art of Reading Billy Collins - re: Introduction to Poetry

There's only one or two
righteous ways to read
Billy Collins how-to poetry
а
Childishly and imaginatively, а
Mainly а
а
If you actually try to apply а
his advice in real life а
he'll drop a mouse down а
your pants! а
а
He says "it goes into the poem and а
feels for the light switch....." а
а
Not creepy, at all... а
а
а
...only to switch your hide а
with a waterski on the surface а
of his "playful" poem! а
а
Then, lets his poem play а
the martyr victim а
а
while I take the hose!
а

Electricity is the kind of thing we most often survive
unless by some misfortune it stops our heart а
This fact alone reminds me of heroin а а
Heroin reminds me of a certain heroine а а
а а
She liked to play with electrical stimulation а а
by firing her neurons with a drug а а
that zapped her with strong pleasures а а
but only when she was feeling lonely а а
а а
Just like electricity makes the heart stop а а
her heart did stop, or nearly so а а
until EMTs managed to revive her а а
prompting an apology song а а
а а
Yet electricity continues to play a vital role а а
in society like the unstoppable heroin trade а а
athough everyone could use DC current а а
and other nations succeeded in eliminating а а
dangerous opium trade, only to see invasion а а
а а
After all is said and done, we can garner lessons а а
Electrocution is a thing to be best enjoyed surviving а а
Heroin or heroine also is best to be survived а а
Yet none of these things will be fashionably safe... ever

I press on despite the storm;
its downpour uterin warm
Чthe alchemy of each breath
a gift terraforming myselfЧ

So, he began searching his storage closet
While sorting through his old belongings
Images of those dead children he taught
Murdered in his schoolТs mass shooting
Flashed vividly in obsessional imagery

The present his father gave him on his 12th birthday
A .22 squirrel rifle given as rural rite of passage
Like David with his sling, he was a crack shot
The last time he used it was to kill a coyote
That was raiding his family farmТs livestock
After the predator had killed a lamb
He shot the brush-wolf right behind the ear
At over a 100 yards while it was running

Removing the vintage weapon of from its shammy sleeve
Holding it in his hand he said,
УHello my trusty old friend
You and I are back together once again
WeТre going to a Second Amendment rally
To show them how itТs doneФ

Together they walked out the door

Remember my young friends, bullets always fly both ways in the end;
Always! 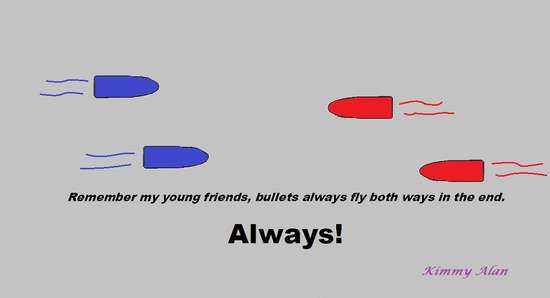 I find silence everywhere
If you would only stop, listen
Random silences of the day
Deeper feeling of silence
In the darkness

Reading Myself to Sleep in My Hometown of Manhattan


а
I look forward to enlightenment as I am about to а
retire to a bedroom in a master suite overlooking а
the upper Manhattan skyline of lights that remain а
burning while I plan to sail in a glorious sendoff. а
а
A snifter of brandy helps to set aside anticipation а
of watching fireworks at midnight from forty floors, а
to put me on track the choice of leather IТll read. а
а
A soft swish of diaphanous curtains sway across а
from stem to stern with a click by remote control а
in a cityТs lull of harbor lights and boats docked full. а
а
The other sounds subside to permit I scan pages а
while serenely letting me drift within the bookТs а
intent to take my mind and breath away up river, а
а
and around the first bend of a fantasy solidified а
as I exhale the way a river sighs and starts to drift а
along the sultry wake of turning pages floating by. а
а
To entice I tip into the underlife slipping on endless, а
sinking into the luxury of letting go, the book to fall а
as I travel through adventures that will never exist, а
and the fish take me back as liners pass by Liberty. а
а
Written by Jade-Pandora (jade tiger)
Go To Page


A cousin also uses this site under the username Heaven_sent_Kathy, so please check out her writing. Ч Charles Owen Lawson: УAll poets, I believe, are scientists in disguise.Ф
Posted: 16th February 2020 3:09pm

There is this sense of the irony here,
and of subtle humor --
clever twists on universal truths
not producing a so-called horselaugh or even a giggle
but more a smirk of acknowledgment
or maybe a snort or a nod
or just a twinkle in the eye
indicating that yes, we get it and yes, it is funny
especially if one likes his humor
dipping a baby toe in the mildly acidic waters of ironic drollery.

Which is, like it or not, where truth often resides.

Because we might as well accept the slapstick antics
involved in trying so hard,
earnestly navigating life's turbulent seas
and attributing our sunken ships to a god's desire
or to Him taking time from his busy schedule
to teach us a lesson that is always too late to be applicable
and is better known
as regret.

As we ran with fleeting chance
like insects, fly from summer's grass
like dogs just let off a lead а
dirty hands, and dirty knees а

See no danger, pay no heed а
аlied when I said I cleaned my teeth а
tremble as I braved a "dare" а
with impish grin and tousled hair а
а
Did my mind just twist the facts а
reminisce through hazy cataracts а
Just аoutlines, as we squint the past а
was my ten, just that far back а
а
Old photographic remnants, in hand-me downs а
refractions of that life in sepia brown а
а
Now let me see, was that the class of 1927 а
could be; If so I had just turned eleven

(Еand Write a Poem About It)

Not to make myself seem a little too sensitive
or at least delicate in certain matters of
a couples playful banter but
my wife likes to play a little rough from time to time
and when I lightheartedly say Уhey youТre hurting meФ
she aptly replies УWhy donТt you cry and write a poem about it.Ф

Now, IТm usually looking for inspiration for my next piece
but sometimes my muse flicks a little too hard
in those УsensitiveФ spots and that when I retract just a bit.
IТll pout jokingly and thatТs when she says
УWhy donТt you cry and write a poem about it.Ф

УOK maybe I willФ I usually reply but the time never comes.

And as I sit there quietly
Listening to the sound of my voice inside my head
Giving me the words and directions
I feel my eyes begin to well up just a bit
Enough to write a poem about it.