I couldn’t brew a soft spot
even when the water touches the bag in the coffee pot
Never wet or soggy to loves regrets
I have no feelings
Frigid cold
weather proof
Fool proof
No fears
Spook proof
But when the 31st comes
Around
I go and hide
From the Candyman
Flames in my eyes
Coming from the furnice in my heart
This sex is blood art
He wants my treats and will do anything to trick me
So I can lay up in the sheets
Backseat
Bench seat
Concrete
He’s a beast within a beast
He’ll even take it on my monthly
Under the twilight
He’ll suck the sin from my neck
I can’t help but to scream
Candyman
That’s twice
I hate this time of year
I tried to call for my soul to be saved
But no phone was near
A puddle full of lies I’m standing in
Sanguine brown tinged blood
Smeared across the path of escape
It was obscured by his shadow
There he was behind me
Stop!
I was tormented by red sin
Every Halloween I would let him in
Falling for his tricks in the light
He was charming
In the darkness he was the devil
I was his darling
My tongue spewed out his name Candyman
The fight couldn’t be settled between
My mind and body
I hated Halloween my flesh was a commodity for him
After that night for 30 days I wasn’t spook proof
I would contemplate emptying my mind off of the roof
For the next 331 days I would pretend my heart was a bulletproof vest and my mind i’d keep in a kennel for sanity
Because
Every time I sat down at my vanity
I would see the reflection of hell in my eyes
My mouth whispering
Ears,
It’s just a matter of time
Before you become a sacrifice again
Covered in Oudem

I think you just delete the original one or edit it to something else here or just wipe it out blank. 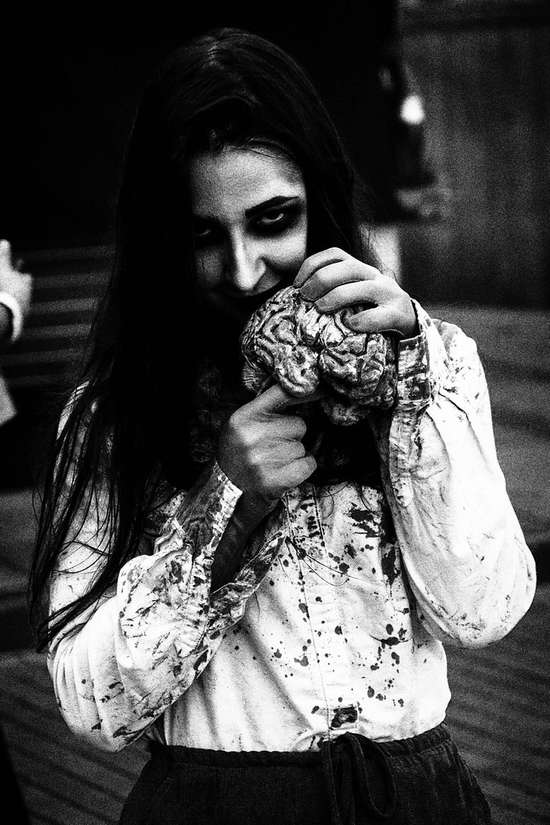 My depravity
has molded me fiend
or perhaps I.... became
conversely

whatever the order of distasteful events
I Am
and that Sir, you should find terrifying

As I dwell there...in your weakness
forever hungry
pacing the terror dome of mans heart

Imagine, that you’re waiting with a friend,
The room is warm with chairs and magazines.
You hear some footsteps then a sort of scream,
A name is called, you answer, it’s not yours.
You stand, and walk a red line round a bend.

And suddenly you’re running down a hall,
You’ve passed the passage that you want to take
But cannot stop; There’s something in your wake
That makes you turn, you turn and nothing’s there,
You’re running and there’s nothing there at all.

You turn again, this time you turn knowing,
It is still there behind you: as your chin
Turns back across your shoulder; as within
Your face starts to feel the fear it's showing.
You must go, but don’t know where you’re going.

And still you run, but now you want to hide,
You’re fast but never far enough away.
You want to stop, you want to stop and say
“Why me?” Then slow enough to understand
You’re really being followed from inside,

And cannot turn the hand or eye within
To pick the vicious molecules apart,
Or separate your tortured heart from heart.
And still you run, and still your heart is raw.
You know because you’re running through your skin.

You know because you’re running down a vein.
You see the desperate massacre of blood,
You feel the brutal slaughter of the god
That fights vast battles for you every day.
You try to speak, you speak but you’re insane.

You try to think and then you try to scream.
You’re lying in a coffin wrapped in wire,
The music ends and now you hear the fire.
It burns in chords which echo through the steam.
You’re suddenly awake. It’s not a dream,

Because once more you’re waiting with a friend
In such a room with chairs and magazines,
You hear some footsteps then you hear a scream,
A name is called you answer, it’s not yours.
With time, you’ll know exactly how it ends.

Time will tell exactly how it ends.
Written by StaveleyJ
Go To Page

Congrats to Jade-Pandora for successfully winning the dark stanzas competition. She really inspired as to what a dark nightmare is and as requested to win. Please check out your certificate and let me know if you'd to your poem to be in my YouTube and podcast at stories behind eyes...

This was truly a hard competition to judge and decide who should be the winner. I enjoyed all darks writing as all impacted my eyes as saying wow and knew it be hard to pick the best poet.
With time was decided and made certificates for truly earned for real nightmare dream inspiration.

I have my runner ups decided and what I all felt is and feels like it is a nightmare truly dreamt. The runner ups are as follows and as for the rest that didn't make the running places I'd like to congratulate them as well for great dark poetry and also I'd love to add their poetry to my YouTube and podcast if ok with it to announce all who participated in this dark competition I created. Inbox me or let me know here your decision.

Thank you all for participating 🤗🤗🤗🤗 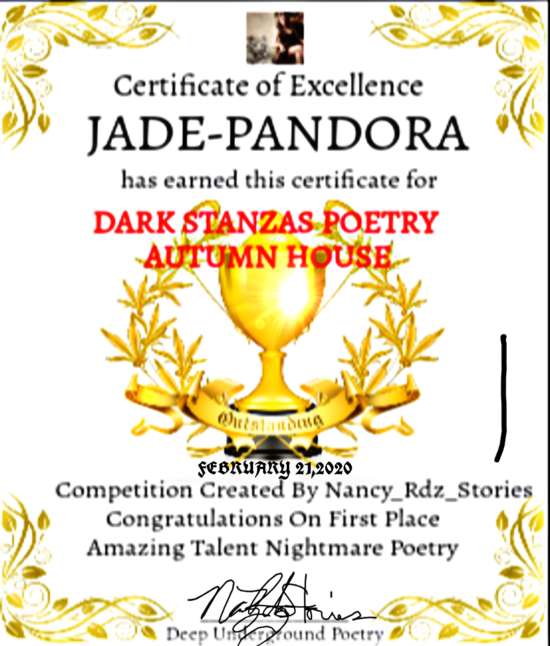 HERE'S YOUR AWARD SIGNED BY ME 🙂 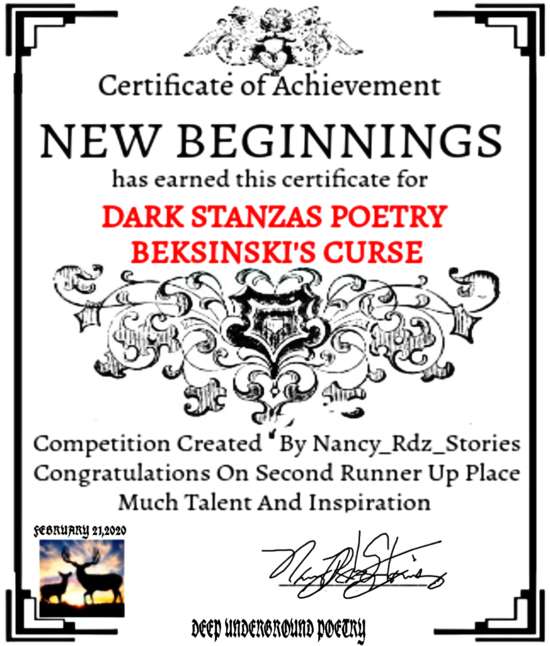 CONGRATS NEW BEGINNINGS ON YOUR RUNNER UP SECOND PLACE...
YOU DID AN A GREAT JOB AS I LOVED READING YOUR DARK POETRY ALL THE WAY.

THANK YOU FOR SHARING AND PARTICIPATING.
HERE'S YOUR AWARD SIGNED BY ME 🙂 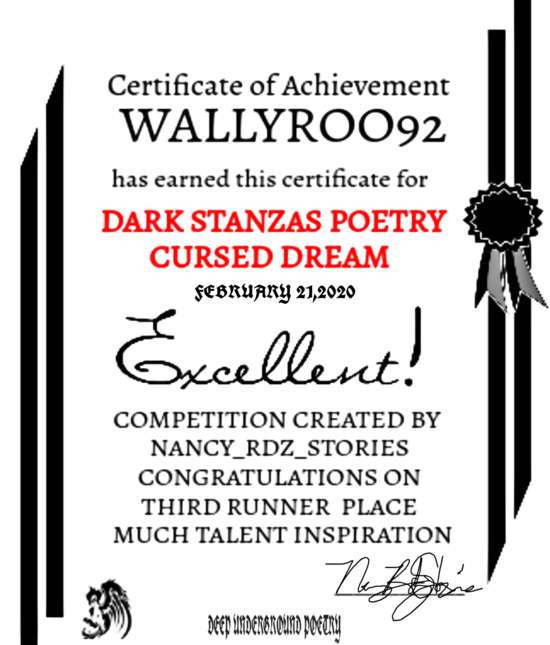 Congrats WallyRoo92
For a great dark write and that inspired me in what a dark dream is truly like. You are very talented and thank you for sharing and participating.

Here's your award for third place signed by me🙂 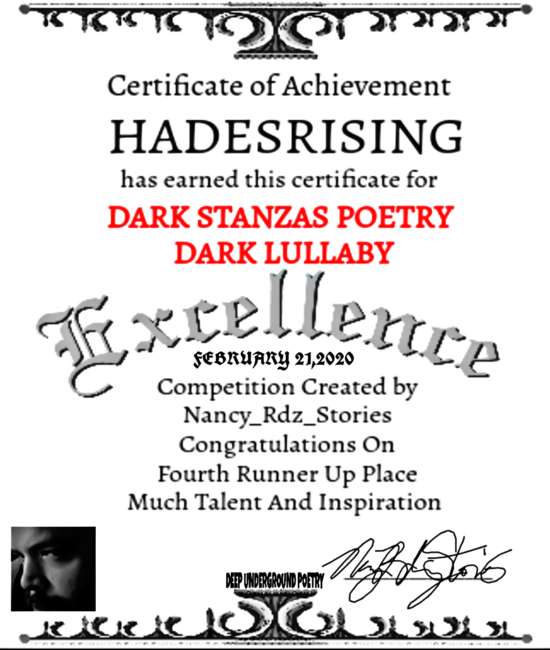 Congrats Hadesring
For a impacting dark poem that even scared me reading but enjoyed it's dark stanza innocent writing. Thank you for sharing and participating.
Here's your award signed by me 🙂 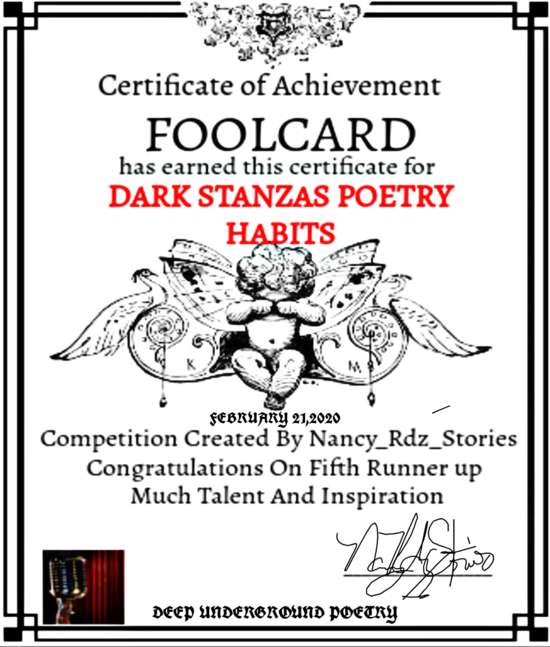 Congrats FoolCard
For your dark poem that I really loved reading and visualizing it's dream. You have lots of talent and love how you write. Thank you for sharing and participating.
Here's your award signed by me🙂 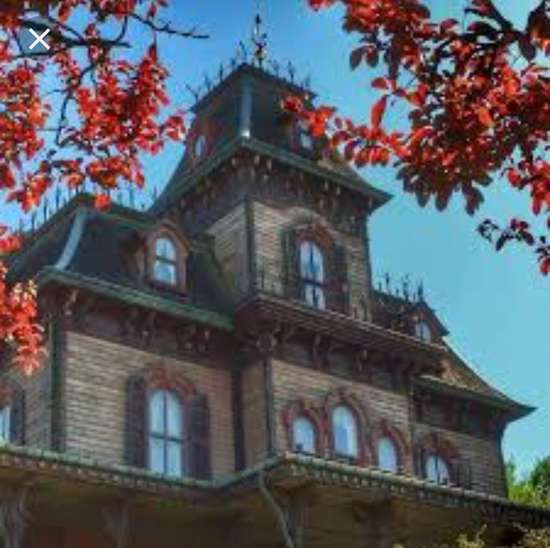 Thank you so very much, to host NANCY_RDZ_STORIES, I’m honored and weak in the knees for such stellar words of congratulations... and the beautiful certificates you made, with wonderful sentiments and personally signed by you.

This was a fine, dark challenge.  And I in turn congratulate the skilled members who were also on the podium with their certificates & ribbons as runners- up!👏🏻👏🏻👏🏻


A cousin also uses this site under the username Heaven_sent_Kathy, so please check out her writing. — Charles Owen Lawson: “All poets, I believe, are scientists in disguise.”
Posted: 24th February 2020 11:35pm

Joined 11th July 2012
Forum Posts: 1012
That is a cool award Nancy! Thank you very much for the honor!
My congratulations to NewBeginnings on standing on the podium with us and to Ms. Jade for taking the trophy on this one. It's always a joy to read everyone's work.

Hey Jade thank you so much and I'm glad you loved your certificates and the rest I made. I do it cause I want to cause it comes from me and makes me happy to know others value what I do for them. I enjoyed this competition, it was hard but loved putting all my love and attention to it. I'll continue to do more further ahead once I feel I can again and do the same way awarding cause it's how I love doing things when I know they earned it.

Thanks for your great inspiration and words.
🤗

You very welcome Wally it was a great honor reading all's deep inspirational writings. I could see the huge talent in all's poetry.

I'm glad you love the award it truly comes out of me to do for all and I'll continue to do the same in future.

Thank you so much 🤗