Writing myself in a text reflection
Based in my relative self perception
Calibrating lines into alignment
From honest lies to the truth of who I'm called to be
Divided against myself, cloven verses of the life and death of my identity

Something like a man yet with the hope of being something more
Is it so much a matter of what I'm writing about or who I'm writing for?

Vainglory spouts from the same fountain of an eternal legacy
Of light and of shadows, the dawning hope of so much more than me
One moment my mere relatable best guess at reality
The next, the truth, that despite every bondage, I am free

All things prewrit, prolific prose of the poetic prophetic
Diamond lines amidst the coal
Fine tune to dismiss the static aesthetic
Every word in process of mining out the soul...
Written by cloventongue89 (Nathaniel Peter)
Go To Page

Bee to the blossom, moth to the flame;
Each to his passion; what's in a name?
—Helen Hunt Jackson

she joined the staff of moe
on my eighth anniversary
but no one stepped in as her guide
and so i snuggled to her side
mentor-mentee relationship
was no less novel, no more hip
because she would not even eat
unless i also sat at meat

one day i had to send her mail
whose speed was only like a snail
she had a digital address
but i had none, i must confess
so when she said j-s-g nice
it made me promptly realise
initials with an adjective
was all i was required to give

since she was nice i could be cool
with no threat to the golden rule
and so we thought of it and laughed
both satisfied with my first-draft
from that day thenceforth, we have used
jsgnice and stood amused
that c-a-b cool was the cure
for my snail-mail discomfiture!

© Copyright 2019 November 27
by Clyve A. Bowen♫
Written by cabcool
Go To Page 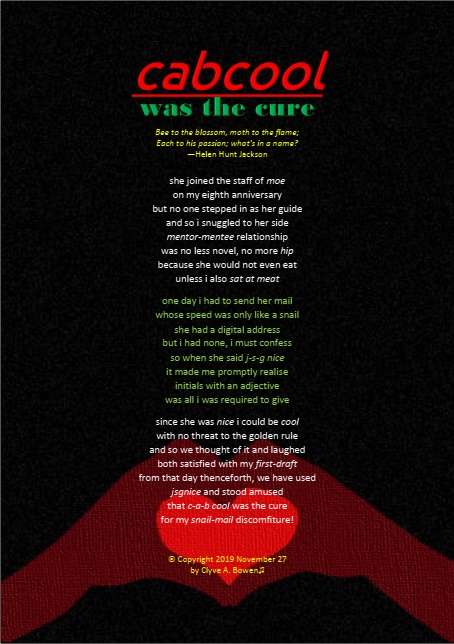 Exactly what it says on the tin - "Underdweller" because this is "DeepUndergroundPoetry". Uh...

Please excuse me, KGERICD, but are you certain that you have posted this in the appropriate forum?
How does it explain your pen name?

Twelve thugs on drugs packin’ mad heat were about to shoot at me,
They was talking smack when I clapped back carefree and happily,
I was young but then again I was seventeen just like my magazine,
‘Cause my glock nine had more speed and rhyme than they had ever seen.

They started spraying but I was praying the Lord to afford me aim,
Suckers took cover like little bitches when they saw my tracers flame,
One drunk punk got hit in the junk when a bullet ricocheted,
And the prick yelled “Ah! My dick” then they all quickly felt afraid.

They fired uninspired while I was wired without dread or fear,
The lame brains saw that the aim from my pistol was crystal clear,
They stopped trippin’ cus I was pickin’ ‘em off one by one,
Ninety two bullets missed my mullet until they I said I won.

I’m just bullshittin’ –
Wally has always been my nickname, I know it ain’t that cool,
Roo just rhymes with ‘92, the year I graduated school.
Written by wallyroo92
Go To Page

Joined 11th July 2012
Forum Posts: 1113
Congratulations to Carpe on runner up and to gardenlover on winning the trophy. I'm honored to stand on the podium. It was certainly a fun and interesting comp seeing the origins of names.