Find someone new!
Mi Copa:  My apologies for the confusion that was caused with the"hiding" of certain poems in the October 2019 competition ...

I've always felt that this competition, more so than others was a chance to highlight not only established writers on this site, but new and emerging voices as well.

With that in mind, I tried to keep the competition winners to one poet per calendar year whereby no poet could win more than one month in a given year, thus the running winners list as a guide of poets that couldn't be nominated.

Somewhere in transcribing the rules from one month to another this addendum got dropped, and with that I found the competition became the same group of devoted poets nominating the same poets over and over ... and over

In no way am I disputing the quality of the writing nominated, because quite frankly most of the winners are poets I follow (and or are kind enough to follow me) ...

With that in mind, if the same people keep nominating each other and then voting for each other ...  how's that a literary competition(?).

What I'm looking to do to close out the year is to keep nominations to (1) those who have never won Poem of Month - SO PLEASE DO NOT POST A PREVIOUS WINNER FROM 2019 or 2018 (it just clogs up the page and makes it harder to get to the nominees ...

and (2) ideally nominate poets who have less than ten writing wins.

There will still be no self nominations in either format.

You have three weeks to nominate no more than two of you favorite poems from another DUP poet!

1. Self nominations are not accepted. The great majority of the competitions here are about spotlighting one's own work on a particular topic or theme.  This is a chance to nominate that poem that you wish you had written but some other great talent here beat you to it.

2. Please limit your nominations to TWO poems. You can nominate a single poem for two different poets; but the nomination maximum remains at TWO (no matter how many pseudonyms they have).  The majority of competitions on DUP cap nominations at one or two poems so there's no need to go beyond that.

No DUPLICATES. If someone nominates the same poem the entry will be deleted. If you like it that much wait and vote for it!

Any genre except erotica or pornography. This is a Facebook feature and we must adhere to their guidelines.

Any member who is banned or disables their account PRIOR to the win will be automatically disqualified.

Any nominated member who wishes to opt out of the competition may do so by messaging a MOD. I will contact the person who nominated you and request an alternate nomination.

Nomination Duration is three weeks followed by a week of site voting!


“The greatest part of a writer’s time is spent in reading, in order to write; a man will turn over half a library to make one book.” —Samuel Johnson
Posted: 31st October 2019 1:27pm

An effect
of the altitude
bites hardest at night

Despair—
while waiting till dawn
in its
savagery

A long
wait that comes
too soon

blocks
a natural bridge
if ever there

Penance—
the deep
frigid of blue sky
is blinding


A cousin also uses this site under the username Heaven_sent_Kathy, so please check out her writing. — Charles Owen Lawson: “All poets, I believe, are scientists in disguise.”
Posted: 31st October 2019 1:32pm

The Echoes of Music 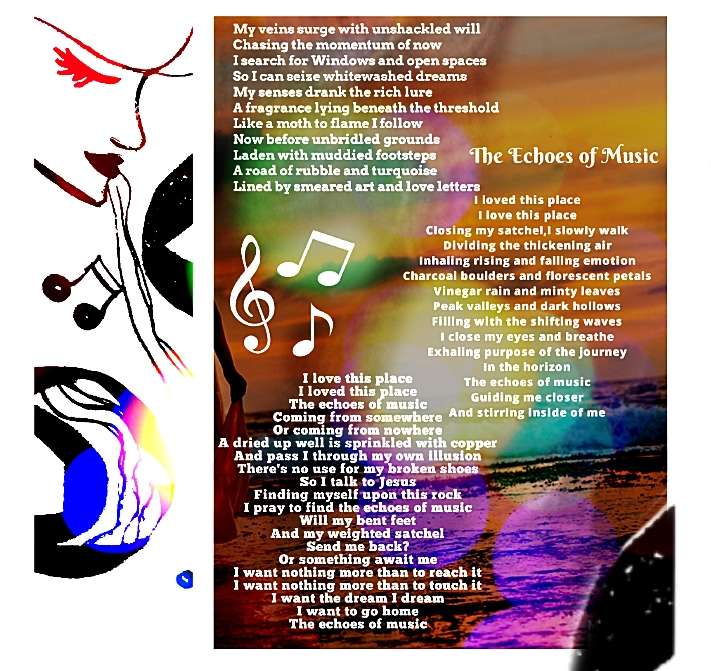 
“If you want to find the secrets of the universe, think in terms of energy, frequency and vibration.” ― Nikola Tesla
Posted: 6th November 2019 3:32pm

These thoughts
feelings
always ever buried
shallow but deep

Painting the blankness
perhaps with something sage
that won't smudge


Written by LilDragonFly
Go To Page


dunn want to clear off the cobwebbing chaotic universes
of the sleepless eyes ….they tremble as racing tuning forks
craving maddeningly in endless salivating strings ….syncing
with this weird thudding heart gone rogue tonight ... from
shattering avalanche unto those once clear corridors, under
heavy border patrols on either side of this wavering geometry


no... would consume all &  utter not any more this silent moment..
else these depths of serpentine memories..mining as deadly thought trains

evoking a whaling moringal hunger.... of a wetty~gummy secreting ambergris
..such musky resinous fogginess marring eyes in thickly sweating tears… yet, the
walling eyelids in airtight locks lets out not the seeming apparitions.... in no

...need you as the needling  firming “I’s” all across this porous substratum
coring in as fully zeroing nullness …we, this Us, are compounding gardens
of seeding abstractions..afloat as majestic achenes of faithful conception]

...would never be felt
(perhaps wholly superceded by prematuring etherealities- oddly
in shady lights under such invasions)

dreary morning in a truck stop off I-70


doughnuts made by
the sick hands of
dirty angels

doughnuts given the
names of long dead
movie  stars:

the Gable
the Bogart
the Monroe
the Dean

wash off the human
race

nothing left here but
coffee, cream, sugar,
the music of the spoon
against the sides of
the cup and one
last taste
Written by buddhakitty
Go To Page

It's not that you are living a lie

You've been lying to yourself
for decades, never fully
tuned into the truth
of who you were

through no one's influence
on the dial but your own

The real struggle began when
I can became I can't
because ...

and for whatever the reasons
continued, train of thought
gained momentum in direction
counter-clockwise to desire

yet going nowhere
except in frustrating
roundabouts

Believing you are capable
is one thing;

practicing
I can
is a whole 'nother story

Here is the next part of yours
---you are the author

I cut the cricket bat from a plywood sheet,
wrapped tape around its rough handle,
used an old beer crate as a wicket.
The summer had delivered a perfect evening
poised over a memory that set the scene
and started to roll the cameras.

The cliche version would have been
on location in an American suburb,
father and son playing catch on the front lawn
mother filming from the wooden porch
all fit, white teeth and healthy,
sunlight would glisten on the lens.

But this was a concrete back yard with high walls
and a gate that opened onto broken glass,
Dad was a spin bowler due to the short breath and run ups,
each innings uncoiled him, took its toll.

I began to worry, watching the colour slide
down his face, a novelty pen turned upright
to reveal a naked body.
I pretended to miss, and listened to the clink
of empty beer bottles as the ball clipped the crate
relief shouted,out, across his face.

The director wasn’t happy wanting to go again
but the star was already leaving the set,
desperately seeking his trailer, exhausted from
his fifteen minutes of acting, it wasn’t long
before smoke draped its silk jacket over his shoulders.

We toured with that film, I did all the pro-mo
while he snorted oxygen shipped in cylinders,
always away from the public’s gaze.

I was asked once what it was like
working with such a professional.
I lied and talked about his better days,
paid tribute behind a filter of blue and green.
I held his hand for the final scene
but couldn’t find the words at the after party.

I asked you to stop breathing
cease the bellows rhythm,
end this fake goodbye.
Body now trespassed beyond retreat,
basic in function,
rise and fall,
rise and fall.
You waited until I slept,
I missed your reply.
Written by Razzerleaf
Go To Page

Strange that it had grown
on the side of a sandstone slab.
A huge knarred hand reaching out
to touch another world,
held by an underground prison.
I thought of it as old,
generations had played at its wrist,
swung from its finger tips.

The rope had been robbed
from a coal mine,
It gave out black blisters
and was hung by a rumour.

The pendulum effect was magnificent,
motion sickness spun from its canopy
to the creak of a rolling Galleon.
Exposed roots collected skin and blood
from thin boned boys on summer days
that shared a look at dirty books,
before they chanced the rope
and felt the kiss of bark.

They chopped off its hand
with no one to hold it,
broke up the slab,
sealed the wound with tar,
built houses over its tomb.

I walked up the hill to see it gone,
my clothes grew with each step,
until I stood as a small boy
remembering,
how I once learned to fly.
Written by Razzerleaf
Go To Page


a circle of friends should be picked

for the color of heart,
scent of words

not the hue of skin
nor stench of thoughts

Written by Amorous_tryst
Go To Page

top of the mountain


i have
waited
a long
time
for nothing...

it's been
the
greatest
achievement
of
my life

Written by buddhakitty
Go To Page