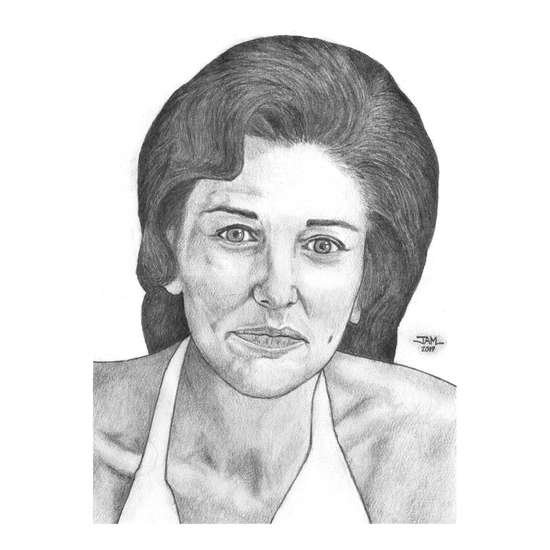 Part XIX in an ongoing series introducing serious writers of DUP to the most well-known poets in classical and modern literature.

Anne Sexton (November 9, 1928 – October 4, 1974) was an American poet known for her highly personal, confessional verse. She won the Pulitzer Prize for poetry in 1967 for her book Live or Die. Her poetry details her long battle with depression, suicidal tendencies, and intimate details from her private life.

Her accomplishment and awards include:

On October 4, 1974, Sexton had lunch with Kumin to revise galleys for Sexton's manuscript of The Awful Rowing Toward God, scheduled for publication in March 1975 (Middlebrook 396). On returning home she put on her mother's old fur coat, removed all her rings, poured herself a glass of vodka, locked herself in her garage, and started the engine of her car, ending her life by carbon monoxide poisoning.

In an interview over a year before her death, she explained she had written the first drafts of The Awful Rowing Toward God in 20 days with "two days out for despair and three days out in a mental hospital." She went on to say that she would not allow the poems to be published before her death.

Write a new poem honoring  Sexton inspired by any of her poems. Do your best to make us feel as though we are reading poems by Sexton. The more we feel you "capturing her essence" in "your own words" , the higher you will score. This will involve choice of wording, delivery, subject material, formatting, target audience - a wide range of factors.

1. One entry per DUP persona.

2. No erotica; this is open to all ages and can't be viewed with an ECW.

4. Any form ( including spoken word ) is acceptable ( studying the poet is advised ).  If you are submitting a spoken word, post the actual poem in the body of your post. We do have deaf members, and while they may not be able to listen, they can at least read and garner the essence of your submission.

5. Hashtag your poem #AnneSexton, and link to your poem here. Do NOT copy paste your poem to the competition. The point is to eventually direct visitors searching for Sexton to your poem via the hashtag we hope will eventually be implemented by the Webmiss.

6. In your poem's notes, provide a link to the poem(s) by Sexton  that inspired yours ( please do not forget this step - we have had wonderful entries which were disqualified for not adhering to this simple yet required step ).

Comp will be judged by a panel including myself. You have one month; best of luck to all entrants.

This competition series will be promoted across our social network sites, and winners will be published on our Website: http://poeticmedics.com/.


‘Death’, sounds almost tender
and childlike when I say the name,
rhyming as it does with ‘breath’,

A life force unlike, lesser the end,
when a door is pried open
with a common kitchen utensil.

I didn’t pay attention and failed,
leaving me to salvage
Plath’s words before her last,

When we’d speak of it many times,
as fireflies, like girlfriends,
sending up smoke rings to be the first.

Now I jealously guard the rite
while I still have life and a history,
and can recall all the words.

I’ll silently invoke the spell
in the cryptic speak of suicide
during a vintner’s year.

When the passion returns,
not meant for here, I’ll open the shed
and it will all be in front of me.


My cousin also uses this site under the username Jade-Pandora, so please check out her writing. I thank you.
Posted: 3rd August 2019 5:50pm

In the deep black unfathomable
where nothing burns of where there is no air,
in the white ashes unreadable
as others cannot see yet still they stare,
in evening’s wicked, winding stir.


I possess, endowed, an evil spree,
insanity, my bent of village spells
on every inhabitant and flea;
my brewing for the vermin with me dwells,
from cavern home the smell’s allure.


A rutted road where dreams awaken,
I scan the scenery to memorize
and see where I am being taken;
the executioner I recognize:
I hear the sounds of chain and spur.

A female like that looks death in the eyes.
I have been like her.
Written by Jade-Pandora (jade tiger)
Go To Page

[ Classic Corner ] Life Of The Party

I can't help being anything but
angry

What I'd settle for
is a martini --- the dirtier
the better and sharing
a cigarette straight from
those terrible, morbid
lips of hers

It was us against the world
on the losing side, but still ...
we made a great team

Or so I thought

Though our happiness
never could be bought---

the jewelry, the houses
the children and spouses

---she left behind everything
precious that should matter

Joined 11th Apr 2015
Forum Posts: 9802
Next month's poll to determine our featured male poet is up. Thank you for your vote.

More than Myself ( after Anne Sexton )

A certain charm adorns
a gutter, you see its potential
when it becomes home;
rat breath inhaling your own—
silence louder than death
when that last dumpster slams shut.
Decay is a familiar thing
to the homeless—
larger than life curling up
inside their brick tomb at three AM.
Hopelessness seems synonymous
with vagrancy—
our eyes squint through the dark
at lumps of coal bodies, solid
in earthly presence;
yet, distant in spirit— as stars
existing somewhere above smog.
They are more than myself
these beings
in their capacity to survive.
Fallen, impoverished Gods;
angels among us unawares—
weighing the balances
to find us wanting
in our capacity to love.
~

( despite being married to Mister Sexton;
indeferent of sexual orientation )

for you hath stolen my heart
with your dark art of perusing
Death's panties for its clit's Mistress---
be it Dolores, Jane, Sally - any woman
one could meet on the street
innumerable in the talley

I'm tired, I'm beat
from fighting, no longer reeling
from overwhelming fits---
my vulva in a volta, feeling
Tom-boyed, Dick-ed, and Harri-ed
by you, dear Sylvia

How clean the fresh dug grave
Empty footprints stamped from lifes arrears
The tired franked stamps, torn out to save
Wheelbarrow's punctured wheel collapsed
Weeds that choke untended crops
Shining bronze of desolation
Type prints shouting with your fixations
A metronome of incarceration
Times the hammer on the final nail
Scattered ashes of dried hormones
Jigsaw scrabble that's your subliminal headphones
Black carrion crows to peck at your minds eye
The strewn of all the dreams price tags
Comes exhaustion, running out of options nag
Pipe dreams full of haemoglobins lead
The handbrake locked her resting place

Joined 11th Apr 2015
Forum Posts: 9802
Thank you to all who have entered so far.  We've really enjoyed reading the entries.  Please edit your entry themes to include #AnneSexton, as Webmiss has already created this month's hashtag.  Thank you again for your entries and to Webmiss for her hard work.

Son, beseeching
all I have acquired of you,
You, whom the dusky late hours have made,
You, whom I lusted for and listened for
rattling as bells toll,
clocks revealing our closeness in hour,
our embrace before
the splitting apart of our loves' codependency.

I rock you inside the empty lull,
my quiet one,
unrecieved of longing,
bare of hearts' tethering,
a last siphoning from which
sisters in kind fall away.

'Woman,
weaving a web over your own,
a thin and tangled poison.
Scorpio,
bad spider—
die!'

Written by PoetsRevenge
Go To Page

For September's Classic Corner choice of female poet, how about one of the following?

(NB: This might be the last chance to use the phrase "U.K poets" before the U.K disintegrates in Brexit on 31st October)

The Awful Rowing (Toward God)

'Perhaps God is only a deep voice
heard by the deaf,
I do not know'
-Anne Sexton


Where is God, what sun, what moon
towed the misogyny
to leave me here in his blood?
The far off island of blinking starlight
winks and carries me off:
I am floating, I am rowing.

Seeking, I am always seeking;
such tedious labor to play this game.
He is receding as I push on to his
island in the sun
inhaling its fishy, sour sobriety.

My skin is removed of its endurance,
I am raw, blistered in the salt air,
glued to this loathsome work
full of repetition and of wondering how,
why am I not further along than
this distance would allow and
so willingly could provide?

I let go and drift further away,
yet not toward a reckoning vision,
a dock of any real knowing.
Who knows God at all, really?
He bobs to and fro on the horizon
of seasickness, yet
to strive to know is to row and row,
I surmise, on and on,
my heart's futile desires in tow.

Where is the frothy outcome
of this great race and whom is winning,
am not I, I ask God, to no reply?
His smile is a passing cloud I long to be,
or anything but myself who hunts death,
stalks it even, pushing against all odds to it
for the currents would have me onto
the shores of insanity otherwise.
I wish to die perfectly, gulped by the ocean,

Enfolded into the swift waters like a water baby,
fins shimmering in the sun, as unflawed as its life.
I am streamlined for this struggle of returning
though I remember not my origins,
my moments of growth,
what brought me here.
What abandoned my great struggle
for living and life,
I do not know.

That great void that calls to me
and teases my perceptions has no voice;
it is a voiceless agony,
an awful calling to arms.
My arms are at my side as my resistance falls
and it keeps a poker face, so do I for the sake of it.
I cannot know why it swims around me
like an awful, hungry fish waiting for
the inevitable decay of my hope;
nothing dies whole in these waters.

I remember growing, learning, reaching
from a square crib to a square desk to
a square sheet of paper,
filling it up with the unknowns,
the uncertain words of tentativity
that were so brassy, yet so unaware
of what was to come:
The great fall of the stone heart
plunked into an unremembering ocean
undocumented in its descent,
lost to the island of God
and its salvation.

I see him in the distance, that hooligan
and I row on.
I inhale deeply from a cigarette,
satiated
and unashamed to die.

(an epic non-entry)
Written by PoetsRevenge
Go To Page