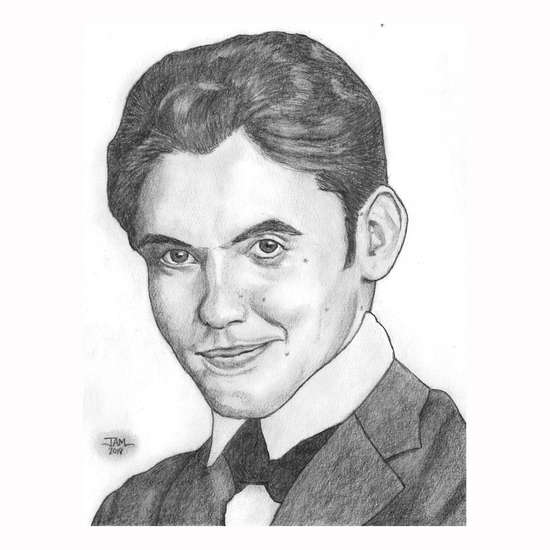 Part XVI in an ongoing series introducing serious writers of DUP to the most well-known poets, both classical and modern.

Lorca achieved international recognition as an emblematic member of the Generation of '27, a group consisting of mostly poets who introduced the tenets of European movements ( such as symbolism, futurism, and surrealism ) into Spanish literature.

With the publication of his poetry collection Romancero Gitano, or Gypsy Ballads (1928), Lorca received significant critical and popular attention, and the following year traveled to New York City, where he found a connection between Spanish deep songs and the African American spirituals he heard in Harlem.

When he returned to Spain he co-founded La Barraca, a traveling theater company that performed both Spanish classics and Lorca’s original plays. Despite the threat of a growing fascist movement in his country, Lorca refused to hide his leftist political views, or his homosexuality, while continuing his ascent as a writer.

Executed by Nationalist forces at the beginning of the Spanish Civil War, his body has never been found.

Write a new poem honoring Lorca inspired by any one or more of his poems. We feel listing particular poems may be constricting, and want you to follow the inspiration wherever it leads.

Do your best to make us feel as though we are reading poems by Lorca. The more we feel you "capturing his essence" in "your own words" , the higher you will score. This will involve choice of wording, delivery, subject material, formatting, target audience - a wide range of factors.

4. Any form is acceptable ( but studying the poet is advised ).

5. Hashtag your poem #FedericoGarcíaLorca and link to your poem here. Do NOT copy paste your poem to the competition. The point is to eventually direct visitors searching for Lorca to your poem via the hashtag we hope will eventually be implemented by the Webmiss.

6. In your poem's notes, provide links to the poem by Lorca that inspired yours. Without these, we have no way of determining if you were truly inspired by Lorca or simply swapped fresh words into his existing poetry.


The cream of the gypsy moon
on this night of green, rising

cannot eat, to leave it intact
lest the old gypsies mourn.

to not sit astride, to admire
the bath of reflected silver

on each other’s face from the path the moon has taken.

That their love is not welcomed
by the stillborn water, isolated

and fading into the green night
while she bleeds in silence,

unable to hide in veiled mists
on her veranda of high birth.
Written by Jade-Pandora (jade tiger)
Go To Page 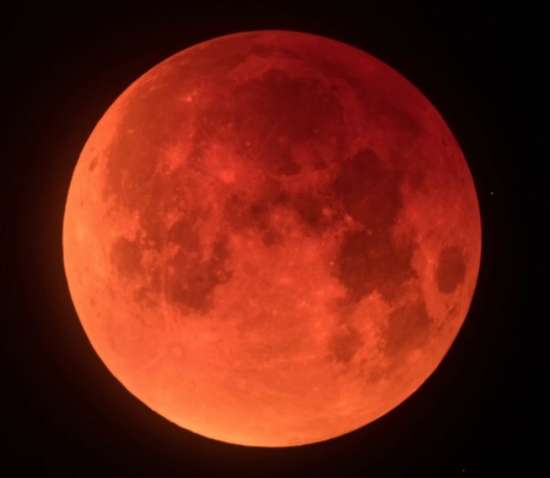 [ Classic Corner ] Of The Naked Girl

barely leaning lazily---
her bare backside against
a poplar tree occupied
by birds counting two -
loving doves, I believe
by the sound of coo;
I spied the lady, nude
raptured in reverie --- she
being no one in particular
spoke to me without words

I, being of mind to (re)create
captured with precision that gal
going about this exhibitionist swoon
minus hard wood at her soft behind
or those little feathered friends in love
or moon and sun likewise perched above
skied high up until noon

because I could;
that's what I oft have done
and continue to do

Thus, during my visit begun
as an audience of one
I drew, preferring to draw
what I see as it was when I saw
with my very own eyes
without thinking, nor did I think
she would mind being drawn

And there on the lawn sketched in
leaves browned and grass greened
was another lass, naked, leaned
ass against another poplar tree
preoccupied by another pair of doves
continually shrinking

speaking softly to a moon
barely yet slowly blinking

captured oftly by the sun
unthinking

Many things shall be said
once I'm deceased—
maybe what I actually wish:

Death breeds Truth
despite how unwelcome its fingernail
picks your secret’s lock,
hidden down the chimney’s throat.

Every existing thing alters to live—
marinates slowly inside change.
Everyone gestates hungry until dead,
though not from hunger itself;
but, for Life instead.

See? Nothing was about me personally;
I am no singularity.
~


A dark seraph, and a black horse,
riding the one without a broken wing.

My heart is an orange,
drawn and quartered in sections,

that death haunts, that knows
the way is far beyond Córdoba.

But not for me, like a songbird
who sings of my pain,
not of the love I have to give it.

White lillies of chalk
hide from the dogs

Who stalk their poisons
in dreams of remembrance

In my secret orchard,
windswept in Night's greenery.

Like tulips in January
I sleep in frost's hibernation.

As a tremor I am kept
by pains of a bleeding rose.

Sometimes the night is a wall
that prevents me from knowing darkness,

Sometimes my eyes are but winds
through Death's orchard of remembrance. 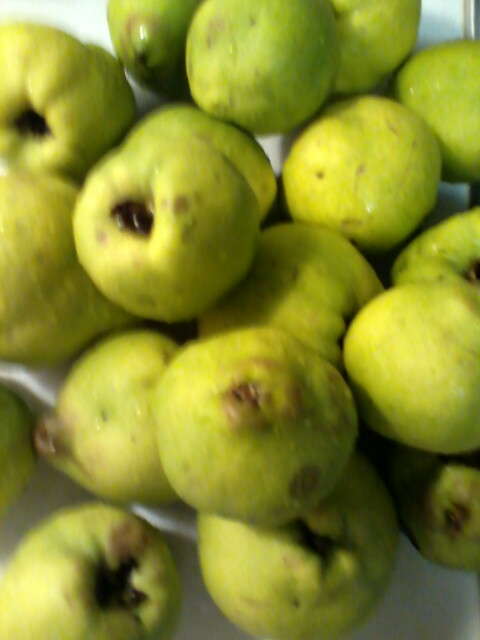 wrested from a flight
I whispered back, each stem’s name
that had fermented in her perfume.
a collapse of my head
upon her nape of morning mist,
where blood had flowered
anabatic musks; guiding me
under a nettled raiment.

…and I shoplifted, scruffed this moment
and placed it into the crosshairs
my on/off switch


as her flushed spine, unzipped
with heavens weight crumbling.
caryatid; from whom each cracked pore
poured red dusted sand
leaking through much  too clumsy fingers
in learned helplessness.
I lost her to a finer mosaic.

And of the dark doves
as they fly, from my Jupiter outpost
I wave as she goes by, seemingly
nothing more than a nude girl
with starry eyes, a constellation prize
straddling Europa's continued whirl
while grasping firm handholds of
Ganymede's beautiful, erected
terrain in his Natural State

For Ex-Machina is Ava and she is
more than human, less than android
in the darkly sky stationed above;
my lovely dark dove in anticipation
incapable of prolonging the arousal
always downloading, downloading
Life

Castanets, pulsing blood and coursing
Regina for the veins
Stabs a rhythm
Passion of ivory carved outlines
Deaths arrogance the haughtiness caresses
Cuban heels, hearts stamped crashendo
Puppetiers we danced
To winds that strummed
Plectrum on the strings of fate
Rat-ta-ta long fingers that gesticulate
Bare the beast of inuendo
Flames that lick from our flamenco
That we will kiss in love and hate
Written by slipalong
Go To Page

The coolness waits
among seedless worries,
in sorrow's early light,
beam of the Moon's flight.

Adam, dreaming,
sees a child aloft
piercing the apple of his cheek
where the woman groans.

She, in morning's blood
soaks the sweet clay
under the tree of life,
burning in the mists of day.

(a non-entry)
Written by PoetsRevenge
Go To Page

with the intent of announcing the winners, linking to the winning entries and promoting future comps in the hopes of expanding your readership.

Individual pages for each comp will added soon similar to our NaPoWriMo 2019 page: 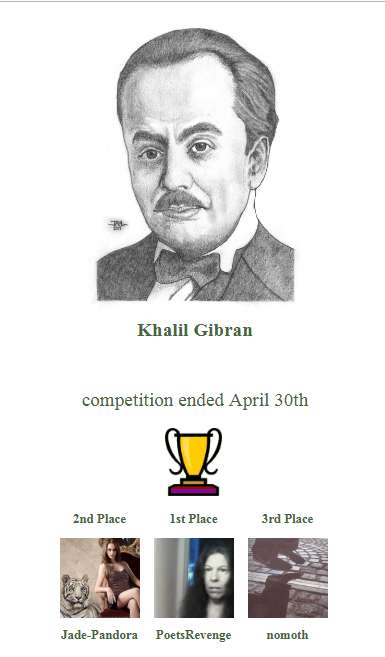 Attencion: Firstly, we now have a Classic Corner Discussion Thread:

Secondly, we're putting the final touches on the Classic Corner edition of our website.  Each comp will look like the screenshot above.  The icons will link back to your winning poems.  If ANY previous CC winner, or current competitor, does not wish to be on featured, please message us immediately.

You can view the site updates here: http://poeticmedics.com/index.html

We've only added winners to Gibran and Addonizio as examples for you to view. We will be adding the rest this week.  It is our hope that this will give you more exposure as a writer and drive fresh members to the site.  Many of our NaPoWriMo participants experienced double and triple views on their featured NaPo Poems.

While your poetry will not be featured on our alternative social platforms - the link to our classic comps will.

A huge heads up to Johnny for working so hard to have this completed by June ( or, should I say tolerating my design preferences alterations

Hark, my lovely dark doves
I wish to park my head
against your feather
pillowed breasts
and rest comfortably
between sun and moon
listening to heartbeats of yours
causing mine to swoon;

I could not love
anyone more

On all fours, in beggary
exposed, I am poor
faced with mortality
What's a soul to do?

Anyone more
I will never love

Look!
at what she's done to him!
It's almost criminal

Going out on limb
myself, I'd say,
It's subliminal

regarding consonance
and as for the assonance -
that's no coincidence either

Silent as a lamb
on the lam far from home

I am the sun
You, the moon

crepuscular, creeping up
from behind throughout June

See how they run in the dark?
How they dance in the sky?
Keeping distance above
far from one another;
in love, a seemingly
forbidden romance

then and only then
I shall kiss you on the lips
during a dark dove day;
our very own private eclipse

Written by PsycoticMastermind
Go To Page