Pillars of the Temple 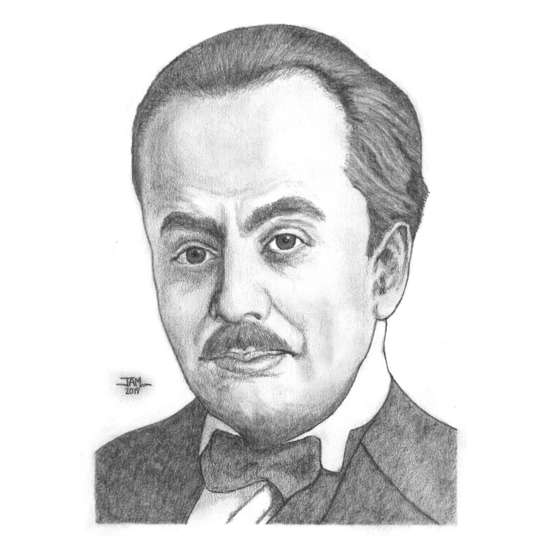 Part XIV in an ongoing series introducing serious writers of DUP to the most well-known poets, both classical and modern.

Kahlil Gibran (born Jubran Khalil Jubran January 6, 1883 to April10, 1931 ) was a Lebanese-American writer, poet, visual artist and Lebanese nationalist, who lived most of his life in the United States and considered himself to be mainly a painter.

Gibran was the key figure in a Romantic movement that transformed Arabic literature in the first half of the Twentieth Century. His early works were sketches, short stories, poems, and prose poems written in simple language for Arabic newspapers. These pieces spoke to the experiences and loneliness of Middle Eastern immigrants in the New World.

Gibran most recognized English work is The Prophet, a book composed of 26 poetic essays first published in 1923 that since has never been out of print. Translated into more than 108 languages, it is among the top ten most translated books in history, as well as one of the best-selling books of the twentieth century.

Write a new poem honoring Gibran inspired by any one or more of his poems or essays.  We feel listing particular works may be constricting, and want you to follow the inspiration wherever it leads.

Do your best to make us feel as though we are reading poems by Gibran. The more we feel you "capturing his essence" in "your own words" , the higher you will score.  This will involve choice of wording, delivery, subject material, formatting, target audience - a wide range of factors.

5. Hashtag your poem #KahlilGibran and link to your poem here. Do NOT copy paste your poem to the competition. The point is to eventually direct visitors searching for fabric to your poem via the hashtag we hope will eventually be implemented by the Webmiss.

6. In your poem's notes, provide a link to the poem(s) or writing(s) by Gibran that inspired yours.

Comp will be judged by Ahavati & JohnnyBlaze, though they will be factoring in my input on each entry as well - while I may be participating with an viable entry of my own. You have one month; best of luck to all entrants.

She gave me confidence
She instilled maturity
She demanded respect

My first lover
Was a bit older
Than other lovers

An individual
A libertine
An intellect

Respect any woman
Who’s willing to
To love you


Ruminating, no one influenced me
More than that charitable saint
Who loved me so sweetly

Inspired by Kahlil Gibran’s ‘Broken Wings’ forward. Not to be considered as an entry for the competition.

between
love & hate
he ponders
the human fate

between
birth & death
&
all the lives
that come
this way

towards his better
world

Trees as much as people, we earthbound
creatures cannot survive beneath another's
branches without benefit of sun, nor root
soil so closely for nourishment. She's true
beauty to marvel over if there ever was one,
atop a marble pedestal I've placed her upon.
To rest too long under her leavage, admiring
her spirited form from breast to bone, is not
an option. For she is both tree and pedestal;
a pillar of community who bears the canopy
of our unity with trained shoulders at times
strained when my limbs become weak and
timber is ungrounded. Though these desires
be interlaced with woven design, let this
togetherness be spaced; yours being yours,
mine being mine.

Risen From A Hunger

For in a time, when everywhere,
the child I was took comfort in
the dangers stalking, hunting us,
my kind, at every turn it chose.
Was where I found a solace in
the tribal rites, lord of the flies,
as bitter herbs I passive ate
because my hunger was so great.

Picked for my lack of size and years,
the tirade with the herbs which had
beleaguered spirit, start to trust
the pain one day would turn the tide.
Approval from humiliate
increase in skill & strength & size
to show the path on which I’d walk.
In this awakening, I felt
the apex sun upon my face,
and joy within my beating heart.
Uplifted from the quiet tone
of sorrow I had always known,
as being one, and of the same.

It started then as I began
to know the entity of love,
whose voice’s lift spoke to my mind.
Within my very soul was God,
whose teachings opened me to pray
as self is opened like a seed.
As it would grow then split again,
while spilling forth more joy until
I realized was not the same,
it was the answer to a prayer.

My interpretation is also based on the harsh realities of my early youth, before and up to the realization of my spirituality and faith.

.
Written by Heaven_sent_Kathy
Go To Page


My cousin also uses this site under the username Jade-Pandora, so please check out her writing. I thank you.
Posted: 12th April 2019 3:41am

Joined 3rd Feb 2014
Forum Posts: 1873
Kahlil Gribran, truly knew how to express his love and I'm glad to see this influence in your work.
Thanks for sharing JonnyBlaze.

Joined 3rd Feb 2014
Forum Posts: 1873
Harry, I loved the way you described the Prophet's spiritual journey.  Might I suggest you add #KahlilGabrid to the end of your work.
Great job.

Joined 3rd Feb 2014
Forum Posts: 1873
A quick clarification and apology.
In my competition posting ‘Pillars of the Temple,’ I missed spelled the name Khalil Gibran.  Though I’ve edited the misspellings, I cannot correct his name in the title of the thread.
Please forgive me.  Sorry for the confusion.

A Lover’s Call ( after Kahlil Gibran )

"But the spirit remains joined safely in the hands of
Love, until death arrives and takes joined souls to God.”

Conjoined by an eternal world
beyond the ethereal veil
through human birth;

Love doesn't discover anyone
within boned sinew; it's innate
calling many, choosing few—
those ready for the threshing floor;

Souls contain centuries—
déjŕ vu stirring direction
from kingdoms past
toward those to come;

Spring is swollen scarlet—
her poppies flying
a parade together
and funeral apart;

as does all planetary life
delivered into the hands of Love
prior to natural extinction;

Joined 11th Apr 2015
Forum Posts: 7911
Question: Do we still need to #KahlilGibran at the end of the actual poem, now that Webmiss has already created a theme we can select?

Hmmm!  Maybe I'll ask her tomorrow.  I'm at work, and am texting from my phone on the run.

Forgive me for using this as opportunity to express my pain, but I'm a steam engineer and winter is still alive in Minnesota.  So, I have to create as much not air at work, as I do in here.😰

Half Of What I Say

‘Half of what I say is meaningless’
will become a chant, my mantra
to everything beyond what I can
express when in total happiness
or abject misery, and anything
between. For I am meant to be a

lowly soul, even in the highest of
his ethereal temple.  That I may
then pass through at every level
from my belly, without arms and
legs like the worm I have become

in this life.  I will serve the Lord’s
purpose in his own interests, for
the best of plans; not just for me,
but including me in his love, in a
divine future. For a worm is also

servant that works gladly for the
cultivation for the good of God’s
message.  Showing me as I rest,
a message half-meaningless may
bring him the other half whole.


A cousin also uses this site under the username Heaven_sent_Kathy, so please check out her writing. — Charles Owen Lawson: “All poets, I believe, are scientists in disguise.”
Posted: 20th April 2019 6:50pm