Content Warning : Do you want to continue?
This forum post contains content which some readers may find disturbing.
It is unsuitable for children or anyone who is easily offended.
YES
I am over 18 years old, I have been warned and I still want to read this forum post.
NO
I don't want to read this type of content, take me back to the previous page.
Poetry competition CLOSED 22nd September 2018 5:42am
WINNER
LobodeSanPedro

In The Oval Office

Historical Subjectivity
Take one President, excluding the current occupant and paint a picture. It can be negative, positive, either or neither. You can use cold hard facts, and/ or feelings. The tendency is to draw narratives that place those we like on a pedestal and those we don't like are made into villains. Where do you fall with your evaluation? It has also been suggested that there is a distinction between the ability to forge a successful campaign and productive governance. What say you? Feel free to mention the current President in connection with the individual you choose just try not dwell on the sitting president. (not meant to be an argument)


I never voted for any Kennedy.

My judgmental innards, smugly
believed
that perhaps you deserved that bullet, but
I’ve deserved bullets, too.

I stood, knee deep in oceans, praying,
watching search planes and boats
frantic—
looking for your son, when
he perished in the waters
those years ago.

“O Lord, won’t you find him
before
the dollar-eyed scavengers, do?”

And I meant it.

But you—
my disdain became less
upon viewing your belongings
at the museum, cold, foggy
on Boston shores.

A groomed golden-boy
you were, lacking
for naught, but
you would have been happiest
just sailing—

We are all cogs in our fathers’ wheels,
becoming
what they insist.

Joined 4th Aug 2011
Forum Posts: 101
Like the way this is prefaced with the skepticism of the clan in general and the ending.

The Bill for those Rights

In looking back at the discussion at Monday’s Professional Development there were a number of issues that left me, frustrated, angry and confused.


My confusion lies in our use of the Bill of Rights as a springboard for a discussion on morality and ethics …? At the core of it, we’re talking about a document that was written by a group of murderous, slave owning thugs (aka lawyers) with rules that were written to protect their criminal, and morally devoid enterprises. Is there any wonder why the words “morals” or “ethics” are not to be found anywhere in the Bill of Rights? Nor is there any mention for protections for women or children; or any mention of proper health care, or education for the masses.


As for the issue of slavery not being signed into the Bill; history has repeatedly said Jefferson wanted to include an amendment but he kowtowed to the South.  The southern delegations basically told him, “Look Jeff, we know you’re getting your salad tossed by that Sally Hemmings gal, but don’t fuck with our territory, and how we run it!” (The classic negotiation tactics of gangsters.) So, is it any great wonder that the great majority of the BOR deals with the rights of the accused in criminal activities, and not the fundamental welfare of “the people”?


And while there is no provision for education in the BOR, even at a fundamental level, we as a country must keep “a well-regulated militia”.  With these founding “principles”; there’s no wonder in the fact that this country only spends 2 – 3 % of its’ revenue on education, and some 15 – 20% of its’ budget on the military.  Likewise, since November 2016, the stock value of the three largest U.S. defense contractors has risen by 20 – 80%.  So, while it may be nice to “write a new constitution” that gets rid of assault weapons during a PD, that shit ain’t gonna happen, because we as a country would rather spend money on bombs and bullets, rather than backpacks and books (as written in 1791).


Just needed to vent.
Written by LobodeSanPedro
Go To Page


Many thanks! to Cold Fusion for sharing this!

Tippy canoe and Tyler too
Of all our presidents
This one could drink
By far the most booze
And when it came to sex
He couldn’t be out screwed
He liked to have fun
With girls who were young
Which is why, though he died in 1862
He still has two living grandsons 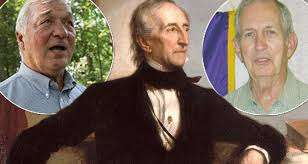 (Re-posted in proper entry format below)

"He's ineffective!"
their invective
was framed as
history

Government will
not be gentle
when politics
are such a dump

Joined 4th Aug 2011
Forum Posts: 101
Thank you for the words about Carter! Even the harshest presidential historian most likely applauds Carter for all he has done post the Oval Office.

You're welcome. Always felt a kinship with him.

"He's ineffective!"
their invective
was framed as
history

Government will
not be gentle
when politics
are such a dump

I tend to lean to the left, even though am I righty,
Because the views from the right are too extreme,
Conservatives think they’re in with the Almighty,
But W in the office? It still makes my blood scream.
I mean who puts that guy in the White House?
Oh yeah, never mind, Florida liked to rock the vote,
I’m still a little pissed over those missing ballots,
And with brother as governor, politics are cutthroat.
Not even a year in as prez and he was put to the test,
When evil showed its ugly face on America’s door,
And oddly enough, a lot of it didn’t make sense,
But then we all had a clear reason to go to war.
It felt like a ruse, an excuse to fuel our anger,
A lie to the American people and that was wrong,
“Fool me once, shame on – shame on you, fool me”
Fool! Won’t Get Fooled Again is a Who song!
But I don’t want to go into all the Bushisms,
There’s too many to point out to tear apart,
Maybe it was him, maybe it was his speech writer,
Because from the podium he didn’t sound too smart.
He was the dumbest president this country ever had,
With George W. Bush it all felt like a disaster,
And just when I thought it couldn’t get any worse,
In today’s America, I kind of miss the bastard.


They found him in a pool of someone else's blood

there was no need for concern

this was just part of a strctly adhered-to health regimen.

Dick felt, and still feels, that this bathing technique

is essential in preserving his "human" biology far past

The only real diversion from the 17th Century

recipe is that Dick doesnt immerse himself in Virgin's Blood,

because, lets face it, where can ya find a Virgin

in the States these days?


Say what you want about him,

but the man does Buy American.

counterpart. The young girls AND boys are thoroughly

screened for disease of all kinds before their blood is

drained and properly processed by Haliburton. An ass

crack staff of skilled plumbers have been hand picked

by Dick himself for his custom system of source pool, pipes,

This unique apparatus is housed in level seven of the

from the stem-cell farm in Room H-3, directly across

The Organ-Growing Room is located in another wing. It's

quite large, with dimensions similar to any big-time

A tour through this Human Tissued Fountain of Youth is

quite fascinating. There are sections for every bodily

prostate, You Name It, all in various stages of development

are proudly displayed throughout a labyrinth of petri-dishes

It's rumoured that slipping a Twenty to the Security Guard

on duty will get you an exclusive peek at the actual

Tonight we can all sleep easy knowing that we'll still

have Dick Cheney to kick around for the rest of our