Lord of the Poems: the Fellowship of the DU

Write a poem based off Tolkien's work 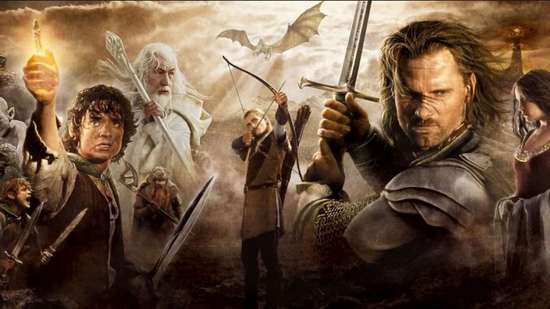 Hello everyone! I'm a huge fan of Tolkien's work, and I've noticed a few people here are as well. I invite you all to write based off of this incredible world, either for a specific character or an event that occurred in the lore. The rules are the following:

1. Maximum 3 poems per participant
2. No collaborations (ironic on my part, but it's for the sake of choosing a winner easily)
3. Please clarify on who or what you're writing about
4. No word limit, but please don't make it terribly long (that's what short stories are for)
5. Have fun!

If you have any question, feel free to message me.

Running, I sprint
dashing into war
not in want to make a name for myself

Leaving such a fool's misguided folly
to the unrequited sycophantic

No opportunity for despair
fewer moments to spare for melancholy

Unwavering is the gilded blade
I wield impossibly in the frantic

A weaving of mist, ash, fume---
I choke for breath in the woolen air
before me as if a bloody, swollen wound
nursed without any tender care

Their fate?
An eternal sleep
blanketed by this awful burial shroud

Now you shall taste
the deadly kiss of this blade
Far from timid lass
I am no servant maid
The mold of my destiny
long ago was cast;
forged for battle
I was made

you will have died

hear it loud
suffer me now

I am no man

[ Tolkien ] The March Of The Ents

the decision is moot

The wrath to avenge our planted
friends of acorn, nut, and seed
---take it not lightly, nor for granted
as we move with little speed

And though we may be hewn of every limb;
from biting axes, sap may bleed
Tell the wizard we've come for him

a warning he should seriously heed:

From Fangorn we march, drawing near
to tear apart and smash and rent
the largest cog, the smallest gear!
Accursed, black stone monument!

Spells from Isengard may be our demise
Flood every trench, shaft and vent!
Drive out Saruman once White and wise

To Sauron let this message be sent ...

[ Bad Raps ] As The Nazgul Raps

Witch KING?
This KING
One of the Nine
servING the Dark Lord of BLING
R-I-N-G;
that's spells RING
Listen up, GolLUM -
let me TELL you SOMETHING!
What is your WRATH
COMpared to the MIGHT of a WRAITH
who lives to CREEP in the DEAD of NIGHT?
Impaling hobbits in their SLEEP
scar'UM to death with FRIGHT
BREAK their FAITH
MAKE'UM WEEP
while I TAKE deLIGHT
A wreath of iron THORNs
ADORNs me with a crown of DREAD
Just you try to PUMPING me FULL of LEAD
Getcha SUMTING AIGHT;
A MORNing STAR upside the HEAD
Yeah, that's RIGHT
That's what I SAID,
beeYOTCH
yo-YO-yo-YO-yo
I'ma a NazGUL
Nasty ass FELow minus a SOUL
Bat outta HELL
riding a FELL BIRD with a stinky CROTCH
SO foul and SMELLY
Flying fast and furiousLY FAR
straight out of AngMAR
Mister G
WORD
Written by JohnnyBlaze
Go To Page

While the dance builds, a moon eclipsed,
Blood rises this summer solstice.

A melodic cauldron is stirred,
Dulcimer strings and fidd’ler's bow,

Of warriors in the clannish hills,
Forging new swords, bathing the blades

In the falls’ crest cascading down
Toward the rolling emerald valley,

Where dragons, circ’ling low, await
The feast they know will come tonight.

Starlit eyes stare long at their flight,
Yearning a journey ‘cross the sea.

Where friends seek, darkness is at bay,
Wizards, unaware of night's crawl,

Travel through ages of magic
To summer nights, when fireworks

Shaped as the shadows of dragons,
Are the only sorcery seen.
Written by Jade-Pandora (jade tiger)
Go To Page 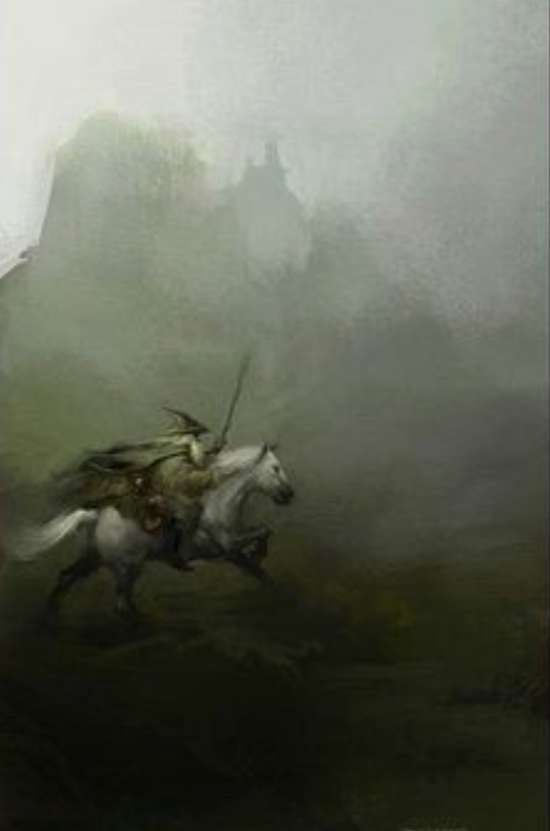 The attack went on throughout the night,
Neither man or dwarf, nor elf got sleep,
And as they endured the drawn out fight,
They started losing hope at Helm’s Deep.
Then many orcs broke through the doors,
When the onslaught came in a great heap,
The enemy advanced by great scores,
Hope seemed lost defending Helm's Deep.
But then Aragorn remembered the words,
"On the fifth day, at dawn, look to the east,"
At first light they gathered their strength,
Hope had revived to defend Helm’s Deep.
"Ride out with me" Aragorn told the king,
"Ride out and meet them" without retreat,
For the people the king agreed with faith,
For the horn will sound again in the deep.
Theoden king and many of his companions,
Charged outside the doors in a great leap,
Slaying the enemy at the gates,
Taking one last stand at Helm’s Deep.
And as they counterattacked at the bridge,
The glimmer of hope became complete,
For in the distance stood a beacon of light,
Coming to the aid of Helm’s Deep.

Gandalf arrived on the back of Shadowfax,
Eomer gathered the Rohirrim in a great fleet,
"For the king!" they thundered,
Coming to the aid of Helm’s Deep.
And as they charged down the hill to fight,
The sun rose behind them blinding the enemy,
Led by the wizard Gandalf, clad in white,
Dawn and hope had come to Helm’s Deep.


A wizard is never late…nor is he early.
He arrives precisely when he means to.

Thank you for your entry! I enjoyed reading it.

Joined 20th July 2014
Forum Posts: 433
Are we allowed 3 entries per account or just 3 entries per human being with multiple accounts?

I do have more poems I could post, beyond the 3 I have already posted.

I do have more poems I could post, beyond the 3 I have already posted.

Hold me in your hand

Such an ordinary metal band
i am
so shiny
G O L D
reflected
in your eyes---
cool, its touch
upon warm fingers
as wraithing hands writhe
in desperation, sensing
POWER that still lingers;

Little Halfling
bring me to Him
and Our armies will sing!
songs reveling about you

Let yourself fade away to black

[ Tolkien ] The Doom Of Man

Hear the drums beat
ground shaking beneath feet;
the very earth is coming alive!
Pulse of ten-thousand strong
marching swiftly along
without break in rhythm
or mistep in their stride

Fueled by hatred
Inhumanity crossbred
---tormented existence
wretched, despised
Whips lashed against backs
Rank and file tracks
as they press onward
in the chill of the night

Man and Elf together
embrace the horror at hand
fighting side by side;
testament to dark days
as volley after volley
of flaming catapult shot
shatters collapsing towers
upon bodies left to rot
Battlements overthrown
fires raging hot

and on through the maelstrom
beat the war drums

All the while the White Wizard laughs

and on through the maelstrom
beat the war drums


Written by Magnetron
Go To Page


Less comely they, than some
the ruddy folk from Anduin
curled on end and end
grown by stream and sweeping hill
full and free
and round with song

A hope in gray
cloaks fasten as fellows fail; and fall
adrift in gifted elvin grace
with faces staunch, black from havoc
ringlets snarled atop such low, but noble heads

Written by AtoMikbomb
Go To Page

Joined 27th Dec 2017
Forum Posts: 469
First off, a huge thank you to everyone who participated in my competition! I'm so glad to see other Tolkien fans here, and it was quite difficult for me to choose a winner. Alas, here's my explanation:

MaryWalker: Your entry, "Eowyn's Song", is absolutely brilliant. Eowyn is strong and respectable, not afraid to defy the social norms of her time and country. The descriptions you've used provide a fantastic imagery of the battlefield as Eowyn slays enemy after enemy, finding the will to continue on even though her kin die around her. She was meant to fulfill her destiny prophesied by Glorfindel centuries before. For you, shield maiden, I offer thee a shield trophy.

AEMelia: I adored your poem about Melian the maiar and the most notable events of her long life. I felt the magic that occurred when she first met Thingol and the love they instantly felt for one another. The love and grief that Luthien brought them in life and with her death. Melian's life is bittersweet, and you've captured that element excellently.

AtoMikbomb: Hobbits are such innocent and cute creatures. I personally think that they've been grossly underestimated, and the LOTR trilogy proved it. It's a shame the trauma that Frodo had to go through to the point that he had to sail to Valinor just to life out his life in peace. Gandalf said it best in the first Hobbit move; "Saruman believes it is only great power that can hold evil in check, but that is not what I have found. I have found it is the small everyday deeds of ordinary folk that keep the darkness at bay... simple acts of kindness and love. Why Bilbo Baggins? Perhaps it is because I am afraid, and he gives me courage."