Write a poem about, or with, acronyms. 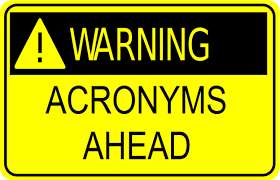 Acronyms; you either love them, or like me, you hate them.  Regardless, we need to recognize that the English language is being acronymized.  Soon we'll all be speaking with an abbreviated tongue.

So, for this challenge write a poem about, or with, acronyms.

Poem will be chosen by a vote.

I’m caught up with the D.A.Y.S.
Even though I’m young, I don’t belong with my generation
I don’t know what people are saying when they send me a message
Deciphering the contents take up most of my concentration.

I start off my D.A.Y.S. with bed hair
No matter how much I comb it, it still looks like a lion’s mane
I’m also paranoid about getting fat; why can’t we just survive off air?
I’m often admired for my beauty instead of my brain.

Omg, lol, brb; what is this mysterious code?
I know people are lazy, but this is just ridiculous
Whenever I use common grammar, people look like they’re about to explode
I’m stressed about performing well academically while other women want to look fabulous.

People call me “odiosa” just because I’m comfortable to stay by myself
I don’t feel the need to constantly talk just to hear my own voice
Many people don’t like me because I “break the spell”
That keeps people in la-la land; on the contrary, they should rejoice!

“People often appear bright until they speak”
That saying is so damn true and I’ll point it out
My quiet personality deludes people into believing that I’m weak
On the contrary, I’ll ignore your provocations and leave you to pout.

I don’t know why I must suffer the D.A.Y.S
Men often boast about their dicks and how much they’ve grown
I’m socially awkward enough as it is
But even I’d try to make a conversation instead of looking at my phone.

Ttly, Shar; wtf is that?
Oh crap, I’ve just typed like the droning bees do
So many of my generation act like spoiled brats
They don’t say my full name; they don’t even spell out “you”.

Thank God I’ve passed through puberty
The physical changes were awkward enough, but I couldn’t stand the girls my age
Hormonal teenagers would often use the empty space by my locker as an opportunity…
To have an intense make-out session; our ideals are not on page.

Bullies are vicious, and the competition is tough
I mind my own business, yet people want to stick their nose in mine
People commented that the reason why I don’t have a boyfriend is because I’m rough
This is what I have to deal with my D.A.Y.S, though I don’t like to whine.

It’s hypocritical of me to use an acronym to describe how I can’t stand them and other things
Though I suppose eventually I’d get caught up with some norms from my generation
Women my age may only care about the bling
Maybe the younger people can set up a better foundation.
Written by LunasChild8
Go To Page

Got A Secret Communication

Just More Codes In The Game We Play

And Those Who Know The All Seeing Eye ?

Or Shall I Just Run This Program Faster ?

How About Hugh Ashmead C.I.A. Cover

Get A Grip , Sign And Seal , Not New Just Unrevealed ,

Just Take This As A Prescient Warning From Your All Seeing Eye !

Acronyms Is An Eight Letter Word

As Is Notariqon When Spelt In Gematria

Which Is The Word For Acronyms

Before There Even Was That Word ;


This Is Because The Words Were Code

For Two Columns Of Eight Symbols

With Many Levels Of Meaning Each

And A Code Within Code Of Base Three ,

Then Base Five , Then Base Eight Code ,

And All Used By Secret Society Members

For Communications Since Ancient Time ;


Those Two Columns Of Eight Symbols Each

Can Have A Ninth Level Each Which Then

And That Number 1008 Equals The Values For :

Looking At Pillars Of Masonic Temple = 1008

If Want To Know More Just Ask Me
Written by Blackwolf (I.M.Blackwolf)
Go To Page

Joined 27th Dec 2017
Forum Posts: 469
snugglebuck said:Great use of ink.  Thanks for kicking things off!😁

Thanks! I'm glad you liked it.

First words flow swift between screens.
Then 2Ds, an MP3.

Liquid gold buried under coveted burning sand
Imperialism and Christianity
Journeying hand in hand
bound together in pure hypocrisy;
thinning veil between Church and State
Perpetuate democracy
Subjugate
And on and on goes the debate while

God hates these fucking wars
Body count rising;
not keeping score
He hates Osama
George Bush even more
for the violence we should all abhor

Kill or be killed, seasonal pastime
Peace through violence never failing;
works every single time
Unpoetic rhymes of the insecure mind
Dissected map for a new enemy to find
for oil pipes to cap over which to salivate
And on and on goes the debate while

Yeah, motherfucker
He fucking hates them
This isn't how Peace is sought
Try to debate that
And still Osama is yet to be caught
It doesn't take a genius
or even George Bush to see:
combined, you assholes
are both the enemy!

The path to Peace
this most definately is
NOT

Panic button pushed
firing up war machine
Air raid sirens of hysteria
blare what politicians never really mean
Through smoke and mirrors, your capitalized fears
Is The War Against Terrorism that remains to be seen

Grand was the experiment in arrogance
Incompetence at the helm of national defense
Budget cuts, under orders, neglect of the borders
Missing boards, gaping holes in the security fence

NOT
long after enemy was allowed to slip in
came the rapid one-hundred eighty degree spin
Global shift in policy, rift in attitude
Eyes on the prize;
always kept on the crude

T.W.A.T.  is NOT
a valid excuse to occupy a foreign country
The shocking and aweful reality?

HOT on heels of Osama's newfound accomplice
Search and seizure of bombs
Saddam's regime supposedly possessed
while scapegoats rocked the boat, confessed
to the faulty data Stated when Union was Addressed

T.W.A.T. is NOT
a valid excuse to occupy a foreign country
The shocking and aweful reality?

This war was NOT what it was perpetuated to be

Not in the least

Bring back the men
and women serving in Iraq
sent overseas in premeditated attack
as you evoke the name of God
in your American Jihad;
body count rises as you turn your back
on families of ally, fellow countrymen
on newfound friend, the Iraqi civilain
now caught in the crossfire of hegemonistic desire
your T.W.A.T. reeks of prolongued impossibility to win
They're dropping by the hour in abuse of power;
unsuspecting flies in a woven web of lies
Suicide roaches, camoflauged wasps and locusts
aiming for our soldiers, allies
under smoke and hate filled skies

Written between the lies
the shocking and aweful truth of it
Just another bullshit excuse to occupy a foreign country
Furthest thing from legitimate
Your T.W.A.T most definately is
NOT

Written by Anarchitect
Go To Page

I'm not a player, I just use big puns a lot
I'm not a rapper, I just abhor these THOTS
Sharing my thoughts with those who care to see
All of the T.H.O.T.'s that really make me angry

Typical Hypocritical, Outlandish Talk of the deceivers
That Help Out The pockets of all of the bankers
The Hidden Opposition That actually pull the strings
That Hinder Our Triumph in our pursuit of prospering
Written by da_poetic-edifier (Damon)
Go To Page

She was a PYT, looking for some TLC,
But the chickadee was straight up DTF,
She texted BYOB, and he thought OMG,
This meet was going to be totally lit AF.

Joined 27th Dec 2017
Forum Posts: 469
Thank you, snugglebuck, for hosting these unique and fun competition! I thank everyone who voted for me, and congratulations to David for his runner-up position.

Kudos to everyone else who participated. I enjoyed reading all of your work, c: